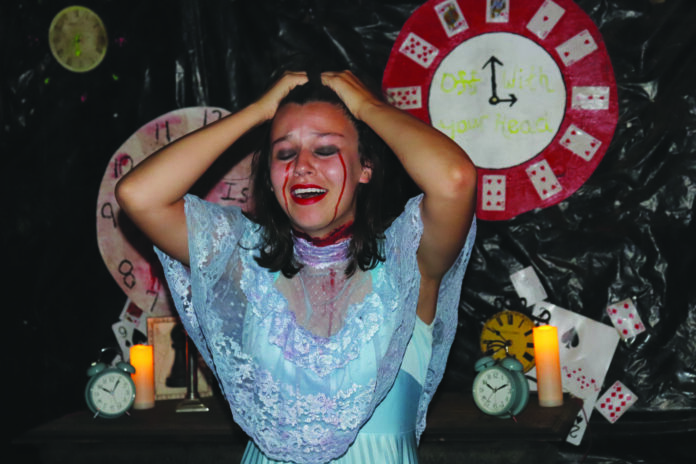 Corpse Grove, The Wicked Playground, is here with a half mile haunted trail pieced together with multiple scenes that are sure to make your heart race. Their website says, “Enough to terrorize even the toughest of the tough, so come play with the Lady in White.”

This haunted trail features two attractions in their half mile walk and their new haunted maze called Home of the Broken. They are open from 7:30p.m. to midnight Saturday and Sunday from 7:30 p.m. to 10 p.m. Tickets are $15 for adults and $7.50 for children under 12. In addition to their general admission tickets, they also offer a VIP ticket that allows you to fast track through lines and attend an after hours ghost hunt with professional ghost hunters.

Another thrill that has opened is called The Word of Khaos. While their theme this year is a secret, they assure patrons the mystery is a part of the scare. Their website says, “although our haunted house theme for 2021 is being kept under wraps, we can promise you it’ll be a great time—well, if you like being scared witless.”

The actors love and dedication for scaring people and creating these chilling environments helps this be such a successful haunt. Patrick Hennessey, who has been working in this haunted house for 14 years said, “I love scaring people. It is part of who I am. When it comes to haunting, they will say this is part of who they are.”

This time of year allows for these actors to tap into a different side of themselves, and once they put on their mask and make up they become another terrifying member of the World of Khaos. A clown named Hele said, “Once you put on make-up you just go with the flow.”

World of Kahos also features two different haunts. General admission is $20, a VIP fast pass is $35, but TJC students can get $2 off their ticket if they show a current student ID at the ticket counter. They are open from 7p.m. to midnight Fridays and Saturdays and their blackout nights are open from 7 p.m. to 10:30 p.m. on Sundays.

Young, broke and in love