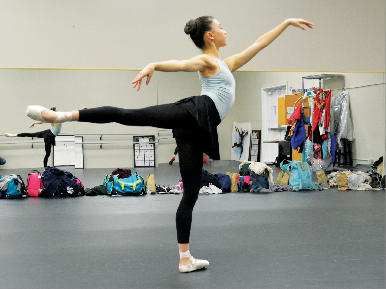 The Nutcracker is returning to the stage for its 28th anniversary at TJC. The classic ballet was composed by Pyotr Tchaikovsky and made its stage debut in December of 1892.

“I am so proud to be a part of this incredible tradition,” said TJC Academy of Dance Director Carolyn Hanna. “The fact that the community continues to encourage and promote this ballet gives me hope that The Nutcracker will continue for many more years to come.”

Ballet mistress, Thereza Bryce-Cotes feels that after watching The Nutcracker, people may peek an interest in ballet.

“Everyone knows The Nutcracker around Christmas time,” said Cotes. “When I see the outcome of what it does for TJC, how it’s getting students to come, to learn, to want to take ballet … it is like a foundation for all the other ballets.”

This year’s production has over 115 performers, ranging from age six to over 60. The academy has invited professional ballet dancers Abigail Simon formerly of Joffrey Ballet, and George Sanders of Ballet Memphis to dance the role of the Sugar Plum Fairy and her Cavalier.

“This ballet has a very special meaning to me since it’s one of the first ballets I ever performed,” said Hanna. “Dancing in this ballet made me appreciate dance as an art form and I’ve been so grateful to help many other dancers experience that joy.”

Not only is this the play’s 28th anniversary at TJC, but this will also be performer Tom Jones’ 28th year to be in the production. His wife, Gwen, has also performed in the ballet for a number of years.

“It started in 1989 when Gwen told me they needed men in the party scene,” said Mr. Jones. “I told her I can’t dance. But anyway, I did it. You always do the things that make your wife happy.”

The next year, Mr. Jones auditioned for the part of Drosselmeyer, the protagonist’s uncle, and earned the part. Ever since then, that’s been his role.

“Probably the best part is watching the kids grow up and go through the ranks. From mice…up to the main dancing roles,” said Mr. Jones. “It’s a great experience.”

The Joneses have played their parts on and off stage, helping with props and costumes over the years. They’ve even helped get families interested in joining the production.

“It is a wonderful introduction to classical music for young people or people who have never seen ballet, or not thought that they would like classical music,” said Mrs. Jones. “There are parts in it for adults and children that are not very technically advanced and bring the story down to earth for non-dancers.”