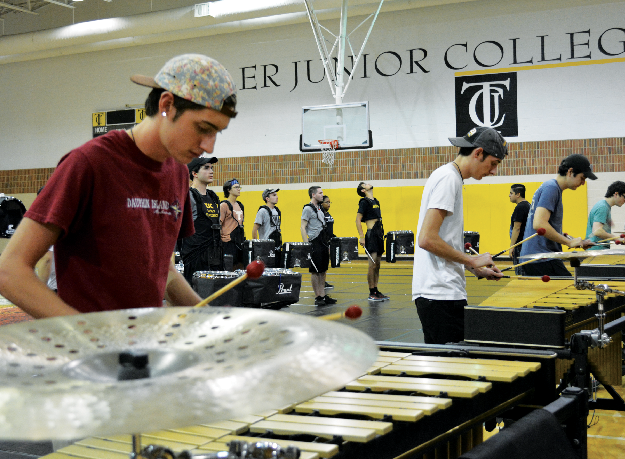 The 2017 competition season is taking off for the Apache indoor drumline, Apache Punch, and they are already making noise this season. They took first place in competition at A&M Consolidated High School on Saturday, Jan. 28 this season.

Although they are pleased with the victory, Drumline Director Tom McGowan says that there is still plenty that they need to work on before their next competition Saturday, Feb. 18 at Cedar Park High School.

“The concern for the judges was the same concern for us, where the show was headed,” said McGowan. “Which a lot of that is going to rely on lights to help explain it since it is ‘A Dying of the Lights’ show.”

McGowan spent time during the weekend rehearsals to work out the kinks of the performance.

Marimba player Anthony Smith is looking forward to what this season will bring for the drumline.

“A lot of us have never competed in indoor before, so the first competition was good for everyone to just get their feet wet and see what it is like to perform in front of a crowd,” said Smith. “We have a lot of potential and people working hard. We have a well-written show and music that could get us a couple trophies.”

“I don’t focus on getting first place, I focus on playing the best that I can,” said Reid. “When everyone else thinks the same way and when we get that score [first place] we can say we feel like we deserve it and keep on going.”

Jen Miller, who is the center Marimba player, sets the tempo for the group.

“We have a good thing going right now,” said Miller. “Everyone is giving it their all and striving.”

In 2015 competition season, the Apache drumline fell short of making it to finals in the WGI World Championships.

“My ultimate goal for the whole season is for us to go and make finals,” said Miller. “Because that means we get to play in the University of Dayton arena potentially in front of thousands of people and really put TJC back out there. The feeling of loading the stuff into the truck and getting on that bus knowing I get to go watch finals but not be in it really sucks.”

The drumline keeps their heads held high while continuing to strive to play the best they can.