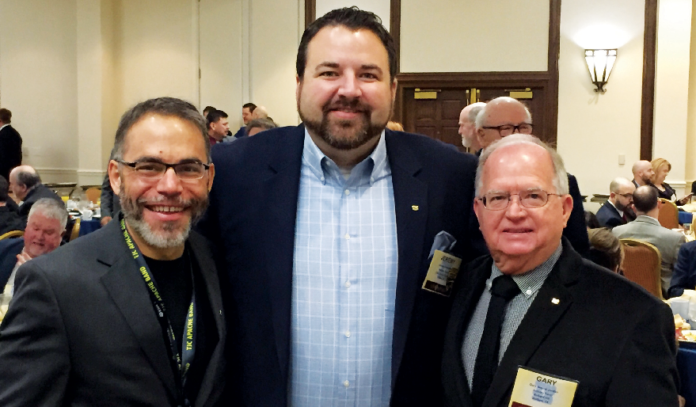 Phi Beta Mu is an honorary fraternity created in 1938 and has about 350 active members around the world.

“There is such a camaraderie within the fraternity,” said Mensch. “The network of band directors range from people like me that teach at the college level to honor band and state marching champions to musicians to teach on another level creates determination to always push yourself. You have people along side of you that are willing to help you at moments notice to excel in your weakness and are willing to go the extra mile to see you succeed.”

Strickland didn’t know that he was nominated to become a member of the fraternity until they announced him being inducted at the annual new members’ breakfast.

The process on being inducted is a very quiet one, to be nominated for induction you have to have a sponsor and two co-sponsors who are already in the fraternity.

Strickland’s father knew that he was nominated due to having to pull some records for the fraternity, but couldn’t inform Strickland.

“It’s especially cool that you get nominated by your colleagues and friends,” said Strickland. “What’s really neat is my dad is also a band director and works in the UIL office down in Austin and part of the background process is that they have to go pull your records, well he is the one that has to pull those records so he knew all this was happening and didn’t say a word because that is the way the group works.”

Stickland’s father is also in Phi Beta Mu and was inducted in the 1990s.

To be inducted the nominee has to have maintained an outstanding and consistent band program in public schools and had least 10 years of successful teaching experience.

“It’s a humbling experience,” said Strickland. “I’m surrounded by great staff, I’m at TJC were I have seven assistants who bust their tail day in and day out and deserve part of the recognition. I’ve taught tens of thousands of students over the last 15 years and they deserve part of the recognition. Me up there just waving a stick doesn’t make any difference, you have to have a band there to play it.”

Strickland was named TJC Director of Bands in 2015, but before that he was assistant director of bands at TCU.

Strickland was also the head band director and assistant at Springtown High School.