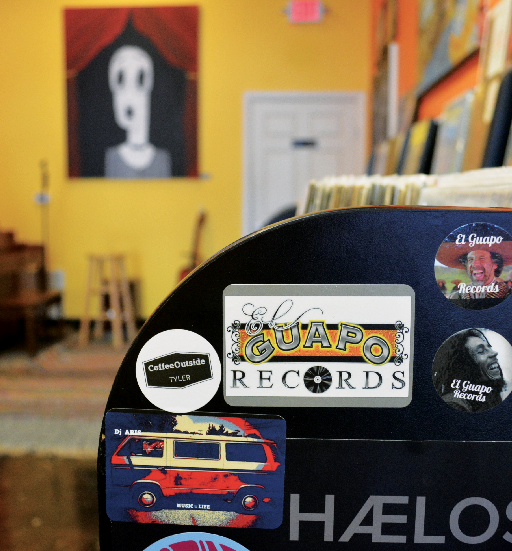 Tucked away downtown near The Lightbox Collective is El Guapo Records, a locally owned record store. While the shop may be hard to locate at first, one may find it’s worth the search once stepping inside.

The owner, Aristeo Rodriguez, otherwise known as A-Rod, greets everyone that walks into his shop, providing a welcoming and friendly atmosphere. The orange and yellow walls are covered with art pieces created by local artists, while at the front of the shop, one could find local musicians’ and artists’ merchandise. Locals are able to showcase their work at the shop without paying a shelf or commission fee.

Rodriguez feels that his shop provides opportunity to locals that they might not find anywhere else.

“It’s my time to give back to them,” said Rodriguez. “Nobody was really able to do that for me, so now that I have the opportunity to do that, it’s a really huge goal.”

Rodriguez has been involved in music just about all his life. From being a part of his school’s band program, to being in his own band, music has played a major part in making him into the man that he is. He’s even been DJing since the late 90s.

“I still do a little bit of that, but here recently I’ve been pushing that all away to really focus on the community involvement we have going on here at the store,” said Rodriguez. “I really want to be able to give back as much as I can.”

“Music drives people together. Music is what new friendships become. This guy here, Neil,” Rodriguez gestured to a man with a brown beard and tattoos, “he’s a rad dude. I consider him to be a friend; he’s a friend of the shop. Him and I, we have so much in common together without ever knowing that we had anything in common because of music.”

By connecting this way, Rodriguez feels that social barriers can be broken, making it easier to get to know other people.

“These guys come in, you become buds, you become friends; and it all started because of music,” said Rodriguez.

Ian Power, a local musician and TJC alumni that participates in El Guapo’s events, feels that the opportunities provided by the shop gives people the chance to embrace their creativity.

“People are told not to express themselves all the time and that is wrong,” said Power. “El Guapo Records is working with a team of locals who want to cater to every outlet, whether it be music, arts, poetry or craftsmanship.”

Power has embraced the creative outlets provided by El Guapo by performing his music and attending Spoken Word, a poetry reading hosted by the shop.

“Creativity gives people a sense of meaning and let’s people express opinions and views on any part of life in a way that is a bit easier for people to grasp,” said Power. “For example, I can say ‘Yeah, I struggle with depression.’ People would be like, ‘Ah man, that dude is sad.’ But when I write a song with metaphors and eerie dark musical arrangements, it seems to hit home a bit more. [It’s] just the same with painters. They can truly shows their inner feelings on canvas.”

Locals have the chance to express their creativity in their own way by attending Spoken Word every other Wednesday.

“It’s poetry, it’s literature, all kinds of different stuff,” said Rodriguez. “We have comedians that come in and do different skits they practice.”

Spoken Word is free to the community and is open to all ages. Sign up starts at 7 p.m. and readings begin at 7:30 p.m.

“All you have to do is show up and just do your thing,” said Rodriguez.

Locals also have the chance to practice their piano skills and guitar skills since the shop provides one for people to use while they’re there.

“We do things differently, so you know this isn’t your typical store,” said Rodriguez. “We have a piano in the back, we have a guitar. This place has turned into a practice room for people at times. So pretty much everyone is open with the way that we do things here.”

Another way El Guapo reaches out into the community is by participating in block parties. Just like Spoken Word, the block parties are free for all ages and typically take place near the end of each month.

“It’s a collaboration we do between all of us on this block. It’s not necessarily just me,” said Rodriguez. “The guys from Moon Rivers Naturals, 903 Handmade, East Texas Life Properties, the awesome dudes over at Lightbox Collective, also the guys from East Texas Brewing Company; we’re all collaborating together to bring these events to the community.”

In the end, Rodriguez’s goal is to simply play his part in enriching Tyler’s community.

Rodriguez feels that this helps to bring families closer.

“[I watch] the families that come in here and buy records and buy a brand new record player for the first time. And then they go home and send me a post over Facebook and they’re like, ‘Thank you so much. We didn’t watch TV tonight. We had dinner, played some boardgames and listened to records. We’ve never done that,’” said Rodriguez.

Playing his part in helping families connect is what makes Rodriguez’s job all the more worthwhile.

“It’s huge because, you know, everything is cellphone driven,” said Rodriguez. “We don’t have Wi-Fi here. You don’t need it. This is a place for people to communicate.”

By not having Wi-Fi, Rodriguez believes that the communication between customers in his shop will grow.

“The friendships and the people that have met each other here in the shop have just been awesome,” said Rodriguez. “I mean, there isn’t a person that comes in here that you can’t talk to. That’s just how it is.”

“There hardly isn’t anything I say no to, as long as it’s gonna submit an opportunity, it’s cool, it’s going to be respectful to the community and everybody’s going to be able to participate. I mean, why not?”