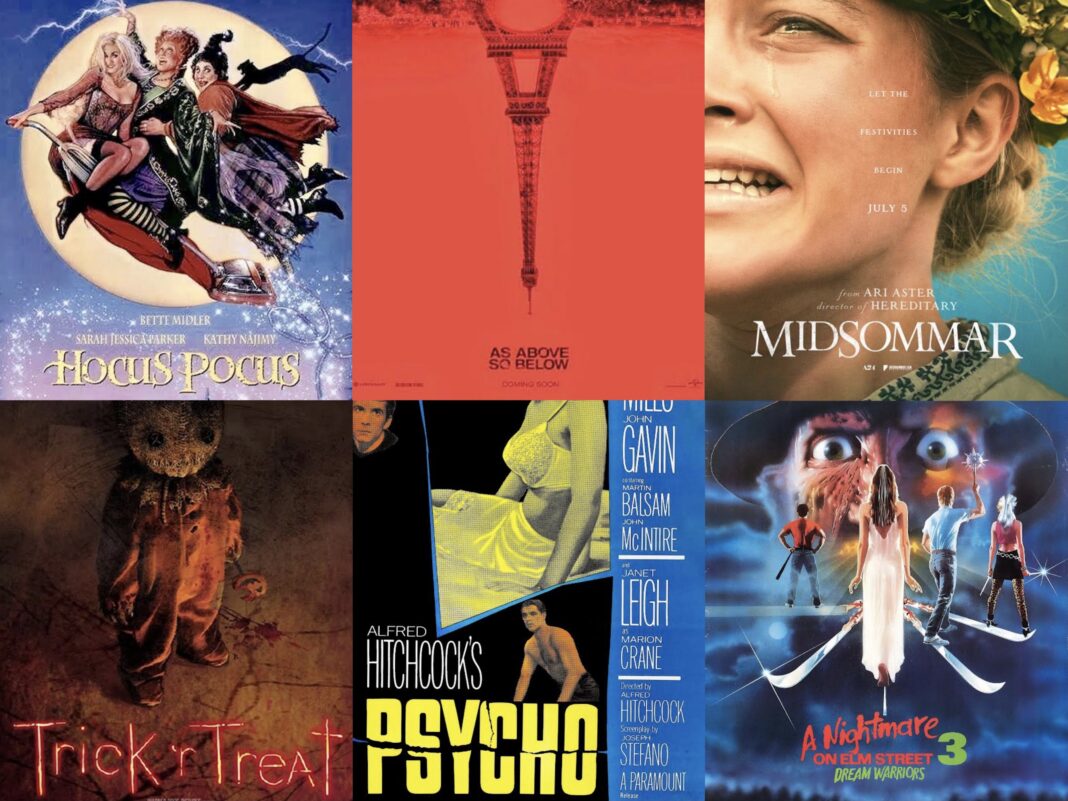 The crisp, brown leaves are finally hitting the ground, and Halloween is near. The fuzzy blankets are being ripped from the closets, and the popcorn is popping. People around the world are sitting down to enjoy their favorite Halloween/horror films. With that being said, here are The DrumBeat’s editors’ picks for their favorite Halloween tinged horror movies.

“As Above, So Below”

My favorite horror movie is undoubtedly “As Above, So Below.” This paranormal documentary style movie provides us with a realistic experience based in the catacombs below Paris. Though the plot may be confusing for some, it is one of the few movies that keeps me engaged throughout the entire film.

You can stream this film on Amazon Prime Video, Apple TV and Vudu.

My favorite Halloween movie is “Hocus Pocus.” With many great classics to choose from, I chose “Hocus Pocus” because it brings me to a place of nostalgia from when I was first introduced to the film in my childhood. The Sanderson sisters create the general mysterious yet comical tone, a combination of my two favorite genres! Overall, this movie is extremely iconic, which makes me love it so much.

You can stream this film on Disney +, Amazon Prime Video, Apple TV and Vudu.

The only scary movie I’ve really gotten into was “Psycho.” This twisted drama takes you through the life of a young man under the control of his mother. This movie features the most iconic shower death scene in movie history. While there’s not a lot of jump scares, the mystery of it all and the dark cinematography kept me engaged right up until the reveal at the end. I’m not one for scary movies, but I genuinely enjoyed every minute of it.

You can stream this film on Amazon Prime Video, Peacock, Vudu and Apple TV.

My favorite is “Trick ‘r Treat.” I love how all of the different stories are told, and it’s a comical rendition of classic Halloween themes. You can tell by the way it’s directed that it’s one of those movies that doesn’t take itself too seriously. There is no deeper meaning than just a collection of satirical Halloween classics and traditions.

My favorite is “Scream” (all of them). I like them because they have jump scares, but they’re not really scary. “Scream” feels like it can happen in reality at any time, as people lose their minds and do crazy things. Some of my favorite horror movies are the ones that could actually happen to someone; it makes it much more intriguing.

You can stream this film on YouTube TV, Apple TV and Vudu.

While some may debate over the horror genre label given to this movie, I’d say “Midsommar” is my favorite Halloween movie. Whether you’d call it horror or just a psychological thriller, this movie definitely gives you those weird jitters that might make you a bit uncomfortable in your seat.

My favorite kinds of movies are the weird ones that make no sense upon first viewing, but after digging deeper, has more meaning than originally thought. The editing in this movie, along with the genius music, keeps you on the edge the entire time. It may not include the typical jump-scares that horror has been stapled with, but I prefer the type that messes with your head and leaves you absolutely confused if not, a little disgusted. “Midsommar” is just that kind of movie.

You can stream this film on Amazon Prime Video, Apple TV and Vudu.

This is one of my favorite scary movies to watch with friends because this is the point in the Elm Street series where it fully goes off the rails. The original is a straightforward, creative enough horror movie, and the sequel still takes itself a little seriously, but not “Dream Warriors.” With kills so wild they become comedy and a soundtrack and theme song by 80s hair metal band Dokken, this movie is pure, unadulterated insanity. Freddy Krueger is a god in control of seemingly anything, as long as you’re dreaming. My personal favorite moment is when he literally turns into a TV to take down a vain, pageant-obsessed teenager. If this hilarious brand of crazy is up your alley, go grab yourself a DVD pack of Elm Street movies and jump into the crazy ones like “The Dream Warriors!”