Marching band performs for an audience of thousands 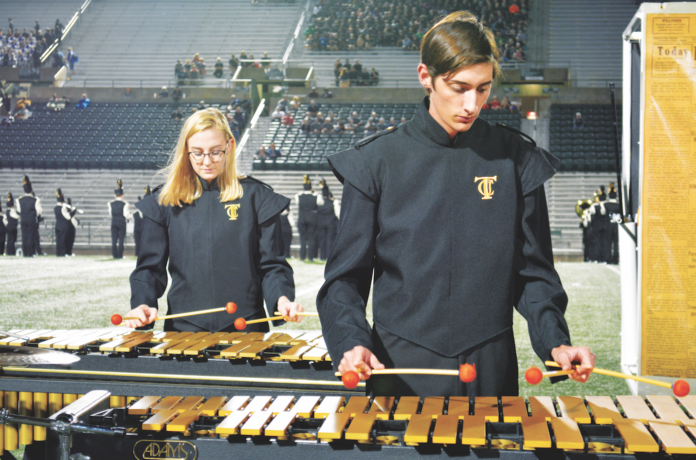 “We told the students from the beginning two things. Number one, we wanted them to end their year on a big note. You know, performing for 10-12,000 people is pretty cool,” said Director of Bands, Jeremy Strickland. “And [number two] for TJC to put their name in front of that many people … To be able to say this is what we’re doing, this is what’s going on at TJC in front of all of these fantastic programs is a pretty big deal for us.”

On Saturday, Oct. 29, the Apache Marching Band performed for thousands of high school students to bring a close to their area marching contest in Mesquite, TX.

Throughout the performance, there were plenty of “oohs” and “ahhs” coming from the crowd, along with cheers and clapping.

“It was so much fun. Honestly, I’m so pumped to go to college,” said Poteet High School senior and saxophone player Diana Tschoerner after watching the band’s performance.

Earlier that day, the band had performed their show “Celebrating 90 Years” at the football game against Kilgore. After loading their equipment following the game and peeling off their sweaty uniforms, the band made an almost two hour drive to Mesquite just to do it all over again. Although many of them were exhausted, they were ready to perform again.

“The feeling of being in front of crowds of this caliber … that feeling is of absolute astonishment,” said sophomore music major Michael Craig.

Freshman trumpet player Angel Sanchez was just as excited to perform. Being a part of the marching band has played a huge part in his college career so far.

“The people here, they’re all great,” said Sanchez. “It pushes you a little bit harder. It makes you get better. It helps you grow as a person and a musician.”

After powering through their performance the band was all smiles while the crowd applauded them.

After a long day of sweating and bus rides, the Apache Band made it safely back to Tyler knowing that they left their mark on thousands of potential students.