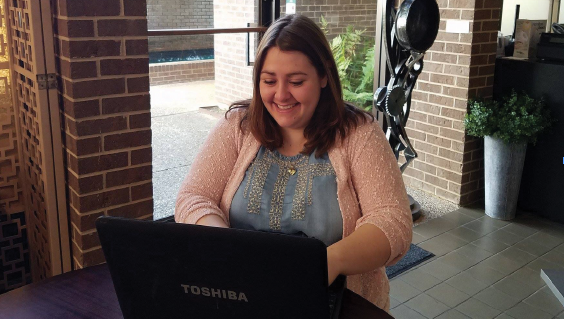 The art museum located on TJC campus grounds, across the street from Wagstaff Gymnasium, has been leasing the property from the school, and now has hopes for more direct involvement with faculty and students on the campus.

The museum receptionist described a number of activities that are offered, such as the Day of the Dead, Art of the Peace exhibition, and exclusive events including the Young Professionals meeting and Little Black Dress.

TMA’s focus of getting TJC students more engaged in art influenced interaction through these events and services will build and maintain the relationship between the school and museum.

“What we’re trying to do is make it [art] more accessible, and to increase the number of people that we are seeing,”said Executive Director Christopher Leahry. “Museums are supposed to be peaceful, calming places, but they’re also suppose to be educational and interactive, and inspire creativity.”

Leahry described an example of how Steve Jobs created our cell phones, along with other devices, that we can hold and interact with using our hands through our touch, and how that idea developed so successfully.

“A lot of that came from just his creativity,” Leahry said, expressing the importance of creative thinking influences, such as art and technological advances.”

Museums are progressing with such technological advances by using audio tours to lead and inform during exhibitions. However, with the TMA being smaller in size, projecting sounds can be intruding to visitors in the next exhibition room over. Limited noise capacity gave TMA the idea to avoid the use of audio guides, instead using Wi-Fi to digitize their works, and access that allows user-friendly interaction through touch screen monitors and smart phone use.

“Recently we’ve started to do tours for the art instructors, and the first thing we do is have everybody pull out their cell phones because we have several things that we do to get them involved,” said Interpretation Manager Derek Frazier.

Wi-Fi being accessible to students and museum visitors will allow digital access to TMA’s permanent and temporary art collection pieces, including information and links to similar artistic works. Memberships are offered to the public, however students can become a museum member at no additional cost.

The on-campus museum considers that students could use additional, inspiring areas to work, therefore offering a quiet atmosphere set with tables and seating for studying and eating conveniences. The café is open four days a week, Tuesday through Friday, with a number of soups and sandwiches varying at reasonable prices.