Rehearsals for Theophilus North have begun 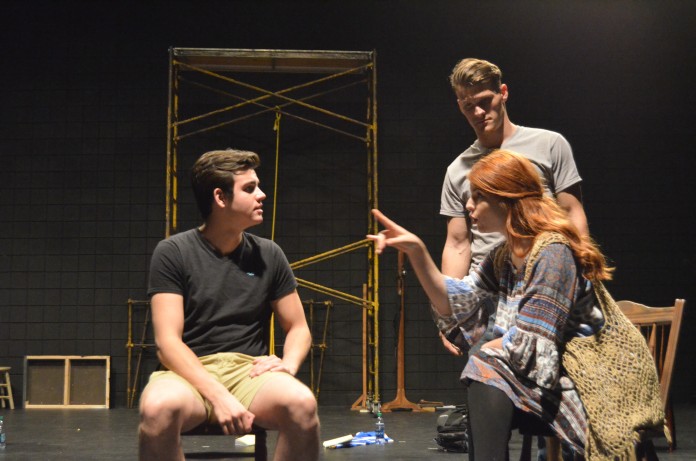 Rehearsals have begun for Theophilus North, TJC’s next play with a deceiving simplicity.

“The strength of the play is here,” said director David Crawford while tapping his temple, “not with things. Not with props. Not with magic. The magic is here.”

Theophilus North, spring’s last main-stage play, is unique in the sense that it is done without any props or scenery. Dr. Crawford intends to use that to its full advantage.

“In our abilities to make believe, we fill in the blanks, which is more powerful than you actually having the [prop] out there,” said Crawford.

He is not unfamiliar with “strictly pantomime” plays. Several years ago, he directed the play, The Night Thoreau Spent in Jail, which also included no props. As an example of the power of our imagination, Crawford claimed that his wife was convinced that Thoreau had realistic props such as replica guns, although it contained none.

The simplistic nature of the play is emphasized by the cast of seven, though the script contains 26 characters. With multiple characters for each cast member, the performers must learn how to assume several faces–some which they connect with better than others.

“I connect more so with Eloise,” said sophomore Bailey Mayo. “She’s more of a free spirit kind of person … she kind of shows Mr. North that there’s a good friend, in even just a 14-year-old girl.”

Mayo plays as Woman 1, whose characters are all in their 20s or younger, like the tennis-playing Eloise.

Cameron Davis, a sophomore playing Man 1, portrays all of the younger male parts, and he connects with his character named Charles the most.

“He’s the 16-year-old who never had ‘locker room talk’ with boys. So Theophilus takes him under his wing and kinda teaches him how to be kid again, how to be a boy,” said Davis.

Woman 2, who embodies all of the female characters around the age of 30, is portrayed by sophomore Ashley Ward. Her parts consist of a concerned society mother, a pregnant socialite fascinated with Shakespeare and an overbearing divorcee. Ward finds herself connecting with Myra, the “crazy pregnant woman.”

“She’s just all excited and full of energy, and she just loves life, but she can’t because she’s pregnant,” said Ward.

Douglas Lake, sophomore, plays as Man 2, and inhabits all of the mid-30s male roles, two of which relate to his natural personality: Hillary, a desperate P.E. teacher attempting to elope, and Henry, a servant who ends up befriending Theophilus.

“Hillary, because he’s very down-to-earth,” said Lake, “but he kind of gets caught up. So he finds himself being very whirl-winded and making really stupid decisions. Henry, because he’s really funny and quick-witted.”

Sophomore Jacob Taylor is Man 3, who portrays all of the male roles nearing their 60s and 70s. One of his characters, Dr. Bosworth, a confident society father, relates to Taylor’s personality the most.

“He’s kind of an older man, full of excitement, and he’s pretty funny, in my opinion,” said Taylor, “He has a lot of energy and love of life in him.”

Woman 3, played by freshman Ashton Eichelman, encompasses Theophilus’s mother, a sweet and simple Irish nurse, and a doyenne of the servant class. To the latter of which, known as Mrs. Cranston, Eichelman feels most drawn.

“She says things with an air of control. Control in herself, what she’s saying, and the situation,” said Eichelman. “I’m not saying that I rise to that. I just want to be what Mrs. Cranston embodies, so I really feel like I connect with her the most.”

The last character is none other than Theophilus North himself. Trey Treadway, freshman, has been cast as the quirky main character.

“He understands how society works, he just chooses not to be a part of it,” said Treadway. “I can definitely relate to crowd hopping and not being in one place at one time. Constantly being in different places and kinda just floating around like a bird. I never stay in one still spot, especially with people.”

Eichelman also mused about how charming she found the whole play to be.

“This entire play, it’s so cunning,” said Eichelman. “On the surface, it’s kind of placid with social problems that don’t seem to hold the grandeur that large productions have, but the underlying text and feeling, I think, is so cunning.”
The play will take the stage at Jean Browne Theatre from April 27 to April 30 at 7:30 p.m. with one showing on Sunday, May 1 at 2 p.m. Ticket prices will vary. Box Office opens Wednesday, April 20. Hours are Monday through Friday from 10 a.m. to 6p.m. Or you can call at 903-510-2212.