Review: TJC Theatre starts its year with a visual wonder 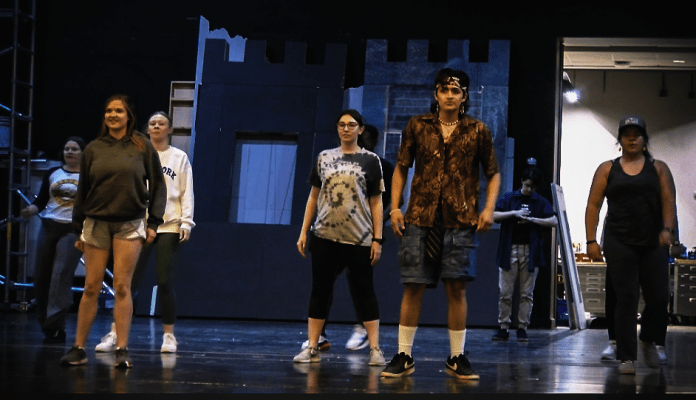 An army of children, a stage lit by colorful bulbs, an array of famous fictional characters and enough songs for at least one to be stuck in your head. That is how TJC Theatre kicked off its first production of the school year, Disney’s “Descendants: The Musical.” There was much to take in about the job the cast and crew did.

The stage design was undeniably impressive as it made the atmosphere more immersive with the quality of the background pieces. The craftsmanship was evident in the details of every scene. The bright lights combined with smoke used during certain scenes created a richer environment that helped the intensity of sad and chaotic scenes. One such instance is when Mal and Ben share a song together where two lights hang over the smoke that engulfs them as they confront the truth of their emotions about each other.

As for the cast, the fantastic four of Addi Saxon, Rachael Gibbs, Asaiah Ruiz and Manasseh Matatila were a sight to see. The four had undeniable chemistry as they shared the stage, seemingly knowing each other for as long as Mal, Evie, Jay and Carlos had in the production. Saxon’s and Gibbs’ singing was splendid, often hitting rich notes. Ruiz and Matatila were charismatic in their wit, especially Matatila, who’s portrayal of Carlos was my favorite in the entire musical. The compliments extend toward Denise Weatherly-Green, Andrea Trent, Luke Howland and Toni Crawford for their portrayals of Maleficent, Grimhilde, Jafar and Cruella De Vil, who were equally as pleasing to watch on stage as the titular four, especially Weatherly-Green who had the best singing performances of the production with a commanding stage presence fitting for Maleficent.

There were a few road bumps along the way though. Mic issues plagued the first half of the showing that often made it difficult to remain immersed in the action. The music sometimes overpowered the voices of the cast members speaking their lines as well as their singing. These two coupled together for a less than ideal auditory experience, despite being in the front row.

After the production wrapped up, two primary cast members exited the auditorium and provided insight about the showing.

“We had Carolyn from the dance department come in and she taught us all the choreography. It took a very long time, a few of the numbers took multiple weeks, but we got it all down,” said Devin Myers, the sophomore theatre major who played King Beast. “I’m not in a lot of numbers so I don’t know much about the choreography, but Carolyn is like incredibly professional and has a lot of experience, so she was really good for that.”

The practice really showed up on stage as the cast was  fluid and coordinated in every dance number. Everyone put in a tremendous amount of effort in their synchronized dance which made it an impressive spectacle. The way the group acted as pieces of a larger whole was quite a sight to see; the movement of each individual contributed in creating a bigger picture through a lot of effort from the teams involved.

“It’s definitely improved in the way that we’re learning our harmonies, it is a very like harmoniously difficult piece of music and I just think that everyone’s getting their harmonies very well and the choreography, people are just remembering it so much better now and it’s great,” said Rachael Gibbs, freshman musical theatre major who played Evie.

The musical aspect of the production was executed in a satisfactory manner. The cast sang often and they sang well. It was honestly surprising how much vibrancy and power some of the numbers had in them. Vocals were tight and rich, and often reflections of a character’s state of mind, but they were also exciting and fluid when they needed to be. Overall, a great performance of less than stellar Disney material; those involved should be proud.

The second theatre production of this semester will be “Holes,” a play based around the book of the same name by Louis Sachar. The plot centers around Stanley Yelnats, a young boy who is falsely accused of a crime and sent to Camp Green Lake as a consequence. The people he meets and the events that transpire during his time at the camp make him reflect on his life and the man he truly wants to be. The production will be shown between Nov. 9 – 12 at the Jean Browne Theatre.