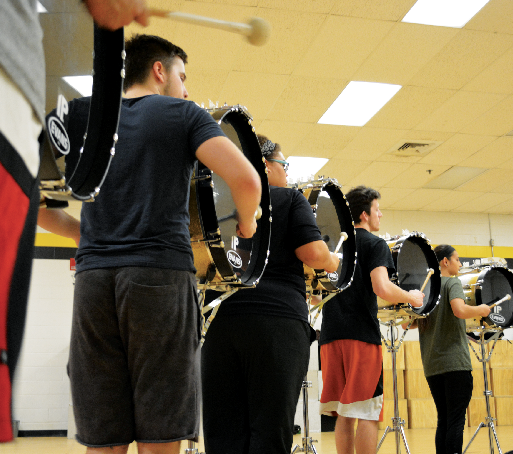 A new semester is upon us at TJC, the art department has drawn up a calendar of events that will take place this spring.

With marching season being over for the Apache Band, the indoor drumline season has officially begun.

“We have been at it for two straight weeks over Christmas break with full rehearsals all day long,” said Tom McGowan, the Director of the drumline.

The drumline will be performing an original composition by Matt Filosa and Shane Gwaltney called ‘Dying of the Light.’ The performance features a large front ensemble.

They will compete in competitions throughout the semester with this composition, their biggest performance being when they compete in the Texas Color Guard Circuit Percussion Championships April 8.

The TJC Academy of Dance also has a full semester planned after performing ‘The Nutcracker’ in the fall. Their first performance will be with the East Texas Symphony Orchestra on March 25 at the Cowan Center featuring some of the academy’s younger dancers and live musicians. That will be followed up by Dance Fest 2017 April 21-23. A student and faculty show will be held on May 5 in Wise Auditorium. They will then wrap up the semester with an Academy Showcase on May 14.

“I always tell people to come 15 minutes early [to] get a lay of auditorium and get a sense of what they are going to see,” said Hanna. “We are always pushing our dancers artistically, physically, and mentally and to make that connection with the audience.”

Hanna will also choreograph the upcoming Mary Poppins production that will be performed in the Wise Auditorium on Feb. 23-26.

Also in Wise this semester, The Wise Art Gallery will be showing off artist Diego Loya’s work called ‘Invisible Boundries’ through March 1. The gallery will be open from 9 a.m. to 7 p.m. every Monday through Friday. Loya will also host an artist talk on Feb. 9 at 1 p.m

The entire art department will come together for the Arts Festival that will take place during entire month of April.

“I think we have one of the finest art departments in the state,” said Art Department Chair Derrick White. “I work with some of the finest and most amazing and talented people that you can find anywhere on the planet. We have a lot of energy and diversity; there is a lot of things going on in our department constantly.”