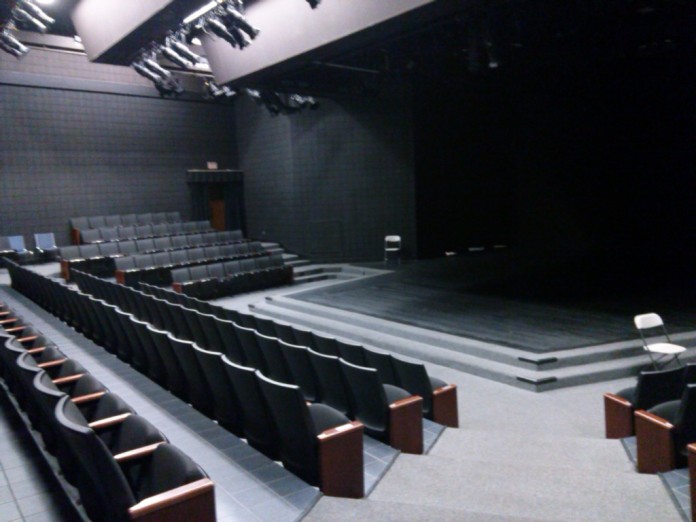 Lighting pours from the ceiling near the back wall, which highlights the rear row of seats. The stage, however, is cast in shadow. There is no play, nor speech nor musical performance taking place – it is merely a stage, waiting like a blank canvas for the painter’s next stroke.

Added to the Watson W. Wise and Emma Wise Cultural Arts building around 1984, the Jean Spellman Browne theater has housed numerous plays, speeches and performances – it has played a role as both classroom and storyboard.

In an effort to raise money for Las Mascaras, or Las Mas as they refer to it (the TJC theater organization), the directors of the theater have begun selling seats. That is, for a predetermined donation, people can have a personalized nameplate on one of the many seats in the theater. Multiple people can purchase plaques on the same seat. “Most of the time it’s individuals or couples,” said Lara Smith, chair of the theater department, but organizations or groups could also make a donation.

“All the world’s a stage, and all the men and women merely players,” as put by William Shakespeare. But stages, like the one in the Jean Browne theater, are worlds in their own right. Each

semester, the theater troop puts together props, builds sets and rehearses scripts to perform live in front of audiences of family, students, faculty and friends.

There is something intrinsically different in viewing a play in person than from a prerecorded movie or television show. There is a sense of life that comes from the people that seems to flow like energy into the viewer. For a time, the actors or actresses on stage disappear from being the students that are known and become the characters they play. The props aren’t made of wood or plastic; melting into the reality of the mind’s eye. A world is created, a story is told and the people around the stage become voyeurs into another life and another world.

Jean Brown, or “Doc” as her students, co-workers and friends called her, was department chair over the theater department and was known as warm, funny and very knowledgeable of anything speech and theater related. She was also involved with the design of the building in the late 70s, according to Angela Porter, speech professor and former student of “Doc” Browne.

“I think it is one of the best ways to connect self to the community of the arts,” said Smith. Every person who has sat in that theater during a performance can attest to that. The students who perform on the stage leave a little of themselves there forever. They also take a piece with them.

“Doc” was insistent “on having faculty members pick up the tiny scrap pieces of copper from the roof trim of the building at the end of each day, …” said Porter. Each year during the annual Las Mas banquet in May, the graduating sophomores are given a small piece of the copper so that they can take a piece of the theater building with them forever. “I still have mine and greatly cherish it,” added Porter.

The selling of seats was a fundraiser started to raise money for the Jean Browne Scholarship Endowment and Las Mas.

While the theater is not being used, sitting inside of it people can feel a sense of waiting. There is a palpable energy in the air. It is the emotion of past performances and the anticipation of the next performance. The Jean Browne Theater is the beginning realization of a dream for those who play and perform in it. It is the interaction of a dream for those who simply come to watch.