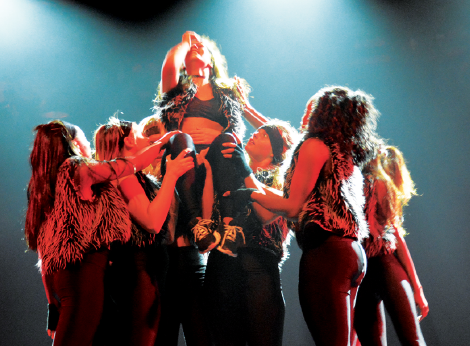 The head dance captain broke down in tears during the Apache Belles Spring Show on April 1 as she danced around in tribute to her mother who passed away unexpectedly 7 months ago.

As the lights dimmed at the end of the solo, Director of the Apache Belles Jasilyn Schaefer and choreographer Christy Evans walked on stage to give Jones a bouquet of roses.

Athletic trainer Melanie Kornhauser who also played Barry Manilow in the Copa Cabana stated that Jones’s solo was a heart felt performance and it was her favorite number performed all night.

“My favorite number in the show was definitely Meg’s solo,” Kornhauser said. “Her performance really spoke to the audience in a way that hit home for her. I know I had to have been extremely hard for her to perform and not only that but to do it 3 days in a row. She was truly inspiring to use her own tragedy and life experience as something made out to be so beautiful”

Jones solo was a dance to the song Incomplete by James Bay.

“My mom growing up was always the mom and the dad figure in my life,” Jones said. “She was my best friend.”

Jones’s mother was also an Apache Belle when she attended TJC.

“I told them a little bit after everything happened that there was never a time for bad things to happen,” Jones said. “I couldn’t have picked a better support system to back me up and be my backbone when I need it and to understand when I wasn’t all there. They knew when my heart was heavy and I was hurting, it has been amazing.”

Jones plans to try out for the Stephen F. Austin dance team in May and transfer there to continue her education in dance.

“I hope to further young children’s passion in dance and reach their goals in dancing,” Jones said. “Being in dance doesn’t only teach you dance but it teaches you how to become a better person and how to be a team leader and serve other people.”

Sophomore Abi Williams also plans to tryout out for the SFA dance team after she leaves TJC. Williams was the recipient of the Mary Payne Lowe Apache Belle Endowed Scholarship.

The scholarship is chosen by Schaefer, the recipient stands for someone who exhibits outstanding character, integrity, grace and compassion for others.

“I am beyond thankful,” Williams said. “I never expected to receive it. If it wasn’t for that I would be struggling to pay for school.”

Williams also runs all the social media for the Belles.

“This has been the best two years of my life,” Williams said. “Thinking about being in school here makes me not even remember high school because I feel like this is where my life started.”

This year the Apache Belles Spring Show’s theme was ‘Love Train’ after the 1971 show ‘Soul Train’. The performance is fast paced and goes through all the different emotions of love and there will be no break in between the 23 numbers.

“The interesting part of this show is that it doesn’t have a master of ceremonies,” Schaefer said. “It does not have a script that ties it all together. So these ladies literally carry the show.”

Schaefer says that she is impressed with how they performed. The Belles prepared for the show since August. The performance will include songs from multiple different decades.

“The one thing that we look for in every Apache Belle is a versatile dancer, you have to be very multitalented,” Schaefer said. “They have really been able to rise to the occasion because it has been really demanding physically and the stress of memorizing. They have blown us away with their capabilities.”

“When I say Spring Show is the only thing we do that highlights the Apache Belles it’s a pretty big deal because all we do throughout the rest of the year is someone else’s event,” Schaefer said. “Its cool for the audience to watch because most of the time what they think of is what they see at halftime which is high kicks with very much precision.”

The Belles make appearances at photo events, fundraisers, and athletic events such as the football game where they perform at halftime.

“They belong to the community of Tyler as they do to TJC,” Schaefer said. “They have carried on the tradition of excellence with a very prestigious and gracious attitude about them.”

“It’s very special our alumni come out and cheer for them [the belles] because we all remember it was like when we danced our last time,” Schaefer said. “It’s always bitter sweet because you don’t want your time here at TJC to end”

Schaefer was an Apache Belle when she attended TJC as well as Evans who was the head captain.

“It is the greatest honor, I get to say I have my dream job,” Schaefer said. “This is what we are passionate about. We believe in this program we believe in the impact it has these two years has on the lives of the ladies that go through this program.”

The final number that is performed in the Spring Show is dedicated to the sophomores. They are announced one by one and they take their final bow in their Belle’s uniform.

“It is a time for those sophomores who have been with the program for two years to have their individual names said out loud and they get to take their final bow as an Apache Belle in the uniform with the pride of TJC in their hearts and finish up their time here,” Schaefer said. “To watch them come in the doors as freshman at camp who doesn’t know what they are getting into and to see how much they change when they take their final bow as sophomores is amazing.”