Cast of ‘The Pillowman’ learns to have totally new identities 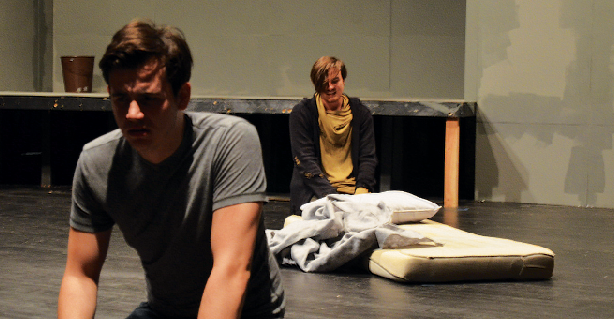 In a world with a totalitarian government, Katurian, a dark-fiction writer, is being interrogated by two determined detectives. This is all the audience knows during the opening act for TJC’s first fall 2016 main-stage play, The Pillowman.

“In Katurian’s mind, he’s in trouble for writing stories, short stories,” said director Jacob Davis. “He defends, he says he’s never done anything wrong, yet we find out that his stories are parallel to some child murders that have gone on.”

Davis is orchestrating this intense performance to open TJC’s 2016-2017 theatrical season. The play, with a main cast entirely of sophomore students, will be performed on Oct. 5-9, 7:30 p.m. Wednesday through Saturday and 2 p.m. on Sunday.

“The big thing that’s kind of a common narrative is the fact of, what is art? Does art affect people?” said Davis.

The story is based around the interrogation of Katurian, and his older, yet mentally-challenged brother, Michal.

“He thinks of himself as a good guy,” said Trey Treadway, speaking about his character, Katurian. “He’s always kind of been the hero in his life… He’s very confused about who he is. And he goes through a lot during this play. He comes to terms with all the big things that happened through his life.”

As a writer, Katurian has conceived several dark stories which often depict violence toward children. Since crimes very similar to his stories have been reenacted in real-life, the detectives, Tupolski and Ariel, suspect him to be the culprit.

Having to assume the role of the main character, Treadway must realize which aspects of his role with which he identifies.

“I feel connected to this character, but really, I don’t have anything in common with him. I can identify with his perseverance,” said Treadway. “Since this horrible childhood, he was able to save his brother, he got a job, he kept up his writing, he was able to keep going… He’s also kind of brave, which I think most people won’t really realize during the show because they’ll be too bogged down by all the other things he’s been through.”

After three weeks of rehearsals, Trey has grown to understand Katurian not only as someone he can pretend to be, but someone who he wishes to meet.

“If I could meet him earlier, like, before the play happens, I would tell him, write your stories, take care of your brother. I would give him warnings, just so he could avoid all of this and have a better chance to just succeed,” said Treadway.

The audience learns that Katurian’s older brother, Michal, whose character is assumed by Walker Delk, is also a suspect in the investigation.

“The biggest question I’ve had doing this is, well what would I have done in his circumstance?” said Delk.

Throughout the story, it’s clear that Katurian and Michal grew up with severely different childhoods. Although Michal’s exact age is never revealed, Delk considers the mental age of his character to be no more than that of an eight-year-old.

“He’s such an interesting character because you cannot truly lock down what he’s thinking. He’s so scatter-brained,” said Delk. “He’s got this childlike energy and vigor and playfulness, but at the same time, there are moments of when he gets into spirals of depression, those spirals of realizing what his life truly is. He is not in anyway handicapped to where he can’t do something. I truly believe Michal can do whatever he sets his mind to.”

Though, due to his mental handicap, Michal finds it difficult to grasp reality, and thus receives mostly sympathy from Walker.

“Honestly, if I could see Michal, I would love to read the story to him, and let him see his experience of it,” said Delk.

Though the mental maturity between Delk and his role are quite distant, he has still found mutual characteristics.

“In that regard, I wish I was like him, I feel like there are times where I could have a positive view on the world. I think the thing that me and Michal have in common the most, is when we don’t understand something, we get sad. Instead of normal people, when they get confused, they get angry, me and Michal definitely share the ability that we don’t understand something,” said Delk.

The lead detective, Tupolski, depicted by Gerardo Carreón, uses manipulation and cunning tricks to get what he wants, with no regard for the feelings of those around him.

“I feel like he’s sort of angry to the world somehow, because of things that had happened to him before,” said Carreón. “So he has become really cold when it comes to feelings and all that stuff. Like, if a dog died in front of him, he’d just keep walking. He doesn’t care for anybody else but himself.”

“I love Ariel. She is so aggressive. Her anger and her instinct to use her fists to solve problems are immediately prevalent, but she’s just so beautifully dark in the most twisted way. You get to see that, in the end,” said Eichelman.

Originally written as a male character, Ariel is a new but exciting character for Ashton to step into.

“I just love how pure her emotions are, whether they’re crazy, high, low, out, in- she’s just, she’s so pure in what she feels,” said Eichelman. “Whether it’s physical or verbally, she’s keeps trying to move things forward, move things forward. She’s the aggressor, and she wants to pummel Katurian … The two detectives are very contrasting in the beginning and the end.”

Like every character in the play, Ariel has a past such that it’s turned her into the cold, forceful personality depicted in the play.

“I connect with her on a lot of levels, but we’ve had very, very, very different pasts,” said Eichelman. “Ariel’s past is what has shaped her. And though I can’t truly get into the mindset as to how her past has affected her, but I understand her passion.”

Tupolski, in contrast, insists on keeping a faux face on, at the risk of revealing any faults.

“He’s just trying to hold himself, all the time,” said Carreón. “He’s trying to pretend to be this tough guy, and he’s trying to be the best at what he does, and he’s always trying to get control of the stuff and the situations.”

Carreón found his role to be the most like himself, compared to most of the character pairs.

“As I was reading the character the first time, I felt like there was a lot of similarities with me and him. … It’s just the way he carries himself around. He’s very sarcastic, very funny. He doesn’t have a filter, he just says what he thinks. He plays mind tricks with all the other characters, and that’s not something I do a lot, I just do it for the fun of it,” said Carreón. “He’s not one of those people you just pass around. He comes and he impacts people. He’s the one who carries control of the play.”

Due to the dark nature of the play, the director and cast members urge interested audience members not to bring their children.