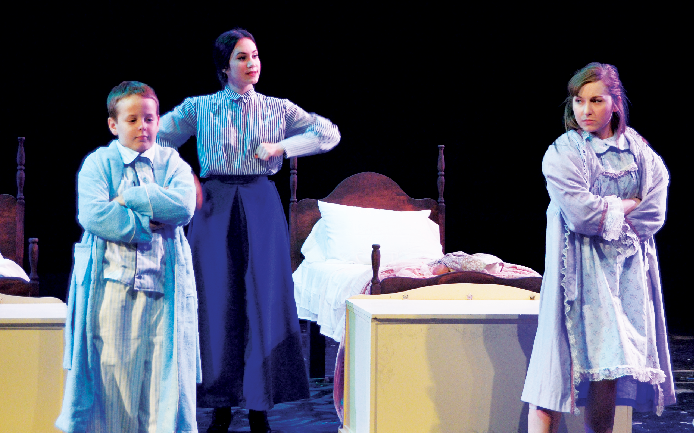 Tears of joy fell from Victoria Dickson’s face as she was at work and got the news that she was casted as Mary Poppins for the upcoming play at TJC.

Dickson did not expect to be casted as the lead.

“I was at work because and I had my friend send me a picture of the cast because if I went and didn’t get the role I’d start crying,” said Dickson. “The second I read it on the picture I started crying. I couldn’t believe it. I thought I read it wrong so I kept rereading it over and over again.”

Dickson grew up watching Mary Poppins and even saw it on the Broadway tour in Dallas when she was 12 years old.

“I’ve been preparing for this my entire life,” said Dickson. “Watching Mary Poppins on TV is my dream role. She has shaped a lot of who I am now because I was so inspired by her when I was younger. I think it has been leading up to this moment for a long time. I had no idea this was coming.”

Denise Weatherly-Green, who is a TJC theatre professor, will direct the play. Voice Professor Andrea Trent is the music director and Carolyn Hanna choreographed the play.

Weatherly-Green relates a lot with Dickson as she was also raised watching Mary Poppins.

The cast was selected so that it would embrace the community and families for the 90th anniversary of TJC.

“For me this, is a safe haven for the kids to be,” said Weatherly-Green “We get so caught up in the baggage of everyday life and the social issues and following the rules of society. George Banks is caught up in those issues and Mary Poppins comes in and says ‘quit getting caught up in things that don’t really matter.’ She allows everyone in her world to find the child that they left behind.

Weatherly-Green wishes that everyone who comes to see the play will take something away from watching it, including the cast members.

“I would like those viewing and those participating to put all that social baggage aside and get back to believing that tomorrow, for Mary Poppins, anything can happen,” said Weatherly-Green. “I don’t settle for less in life, I drive my students to achieve excellence. I don’t settle for mediocrity and Mary Poppins is like that. I hope people take a piece of the show with them.”

The entire set is built by cast members with Weatherly-Green’s supervision.

“We have people who have never operated a power tool and they are very intimated coming in, now they are the best carpenters I have,” said Weatherly-Green. “I would never ask them to do something I wouldn’t [do] myself. I always tell them if [you] aren’t willing to get your hands dirty then don’t try out.”

Cast members also make the costumes on site and Weatherly-Green’s mother who is a seamstress helped.

The TJC box office will open Feb. 15, their hours are from noon-6 p.m during weekdays while the show is running. Tickets are $10 for adults and $5 for seniors and students. For reservations you can call 903-510-2212.