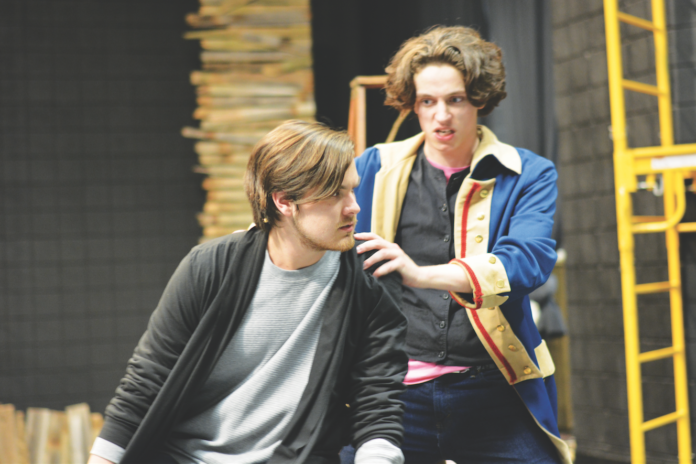 The theatre department is giving students a chance to experience the origins of a childhood favorite with Peter and the Starcatcher come April 26.

“The title doesn’t really lead you to think anything all of a sudden. When I first read the title, I was like ‘Okay, this is it’s own thing.’ I didn’t think it was connected to Peter Pan in anyway,” said Walker Delk who plays the boy who becomes Peter Pan. “But once you start getting into it, you realize there’s all these characters that you recognize like Peter Pan, Hook, Smee and the crocodile, and it’s all wrapped into one, but it’s told through a different story.”

Based on the 2006 novel ‘Peter and the Starcatchers’ written by Dave Barry and Ridley Pearson and adapted to stage by Rick Elise, the show projects a backstory about the main character, Peter Pan, and is considered a prequel to the original story by J. M. Barrie.

“It’s a really pure story of a little orphan boy who doesn’t want to grow up; he doesn’t want to be a grown up. He’s been hurt by grown ups his whole life,” said Delk on his character. “He was abandoned by his parents, the only adult who’s ever taken care of him beat him violently and he has to learn to make the best out of his situation by trying to find home.”

Play Director Rebecca Faulds-Howard is guiding students through this magical universe through the many practices the cast has each week.

“It just caught my imagination; it’s just pure storytelling theatre and it’s just pure fun,” said Faulds-Howard. “It’s using minimal props, minimal set to create this wonderful story and tell this different interpretation of how Peter became the Pan, and stardust, and how everything was created, how Neverland came to be [and] how Tinkerbell was created. So, it’s a creation story, of how the story came about.”

One of the ‘new’ faces, not seen in the original piece is the Starcatcher Lord Leonard Aster, who will be brought to life by Freshman Bryce Neel.

“Lord Leonard Aster is a victorian gentleman from the late 18 hundreds in England. He is a loyal subject to the queen, and a devoted father his daughter Molly, because her mother passed away when she was only six years old,” said Neel. “I am also a Starcatcher, who are people who duel on earth and protect the world from the powerful starstuff, which is basically compared to the pixie dust in the Peter Pan movies.

‘Starstuff’ is the term used to describe the pieces of stars that fall from the heavens and contain powerful magical properties, which are protected by the Starcatchers. It plays a huge part on the show, since it is the reason for Peter’s everlasting youth and all the magic present in Neverland.

“At the end, Peter falls into a huge lake of pure starstuff, and it changes him, and he doesn’t recognize that it changes him, but it makes him be a boy forever,” said Delk.

Neel defines Starcatchers as ‘people who protect the world from starstuff getting in the wrong hands’ referring to the antagonist of the story, the malicious pirate Black Stache, played by freshman Ethan Beam.

“He’s the saltiest dog on the sea,” said Beam about his character. “He’s a bit of a pirate, you might say; the best pirate, I would say. He’s a mean man and he will do whatever he can to get what he wants, be it take over a ship or kill a little boy.”

The name Black Stache might not sound familiar for those who know Peter Pan’s story, but since this is a creation story, the pirate also becomes one of the most famous characters of all times.

“Through character development and through the story, he becomes Captain James Hook.” said Beam.