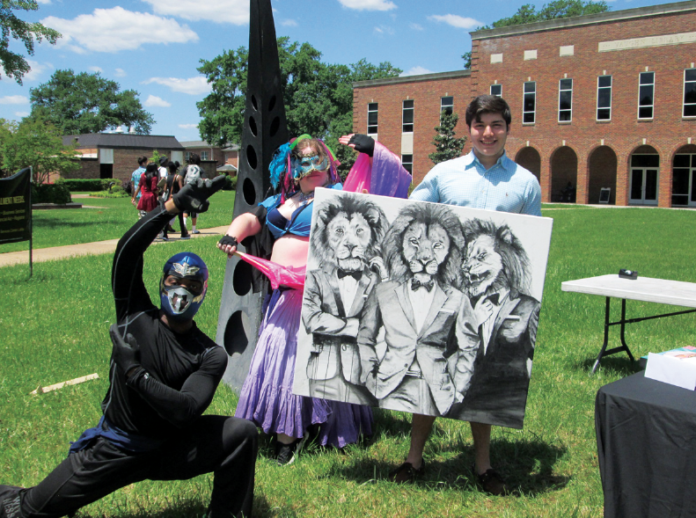 Thunderdome, an art competition that many pieces are entered in knowing only one will make it out in one piece.

Thunderdome originated from an idea from professor Paul Jones and Art Department chair Derrick White while at lunch when discussing why the arts aren’t as popular as sports.

“We were discussing how the arts typically don’t get the attention as a athletic team,” said White. “Part of the reason we conclude is that some of the arts don’t offer the adrenaline rush that you get from watching a sporting event or a competition. So we came up with an art competition where the losing pieces got destroyed.”

Any medium can be enter, but the only catch to the competition is that all of the pieces entered have to be one of a kind and can not be reproduced.

White says that the reason for making the competition this way is so that it teaches the artist to not get connected to their pieces.

“It really teaches a valuable lesson,” said White. “As an artist, after you have created something, you have to detach yourself from it to some extent. If you are going to be a professional artist you can’t keep everything you make. You would end up filling up your garage and house with all the stuff. I encourage people to detach their self emotionally so that they can let it go. It takes the preciousness away from art and I think that’s very healthy for an artist to go through that process so that later in life they can sell their work. It also gives them an incentive to make more work.”

The competition is set up so that one piece will go up against another in a series of rounds. White will pick three random people from the crowd to be the judges for a couple rounds and see who moves on to the next round. The piece that doesn’t advance will then be destroyed by annihilators.

“Anyone that wants to participate signs in then we randomly draw numbers for one piece to compete against another, then I go around and pick three members of the crowd preferably not from our department but just onlookers,” said White. “They just trust their gut, they go with the one they like the best and holds their visual attention more and that one advances to the next round while the other one is destroyed lavishly.”

Art student Shannon Rooney is one of the annihilators for the competition.

“I’m a dancer. I put on a performance while we are waiting for the votes to come in,” said Rooney. “I also destroy some of the pieces. You get to use all kind of tools. I have a baseball bat that I bought specifically for Thunderdome.”

Rooney says that there is a rush getting to destroy the art work that doesn’t make it to the next round.

“There is a rush, knowing that the future of this piece is in the hands of people you don’t even know,” said Rooney. “You get to just utterly destroy it, there is nothing like it.”

Rooney was diagnosed with autism and feels that learning to let go and helping others learn to let go is important.

“I feel that Thunderdome betters people as artist,” said Rooney. “I view each piece as a sacrifice to some personal deity that someone might have whether it is what they are going through at the time. Everyone has a God and a demon in them whether it is a literal God or demon, sacrificing their work to it helps them to overcome that anxiety and that lack of control that they have. I like to share that with people, competing in Thunderdome will make you stronger and it will help you let go.”

The winner at the end of the competition will receive $250 cash and will get to keep their art piece in tact. One they receive the money, they will then have the opportunity to double the cash prize that they take home.

“I have four envelopes out there on a table, three of the options say ‘double’ and one says ‘destroy,’” said White. “If they choose that option they get to pick one of the four options. If they pick an envelop that says ‘double,’ they will get $500 cash and to keep their art in tact and walk away. If they choose the one envelope that says “destroy,” then they have to give their $250 back and they have to destroy their own piece.”

White says that representational work usually does better in the competition than other mediums.

“Representational work usually does better just as a general rule,” said White. “I love ceramics, but for some reason ceramics doesn’t stand a chance because people love to see ceramics break. We have had some great ceramic pieces be entered but the crowd takes over with a mob mentality almost chanting what they want to advance and what they want to seed destroyed.”

Thunderdome will take place on April 26, the last Wednesday of April.

“It’s kind of an end of the semester stress reliever,” said White. “We try to make it as crazy of a show as possible while keeping everyone safe. We have been talking about it for months. We get pumped for it and look forward to it and I hope the rest of the campus does too.”