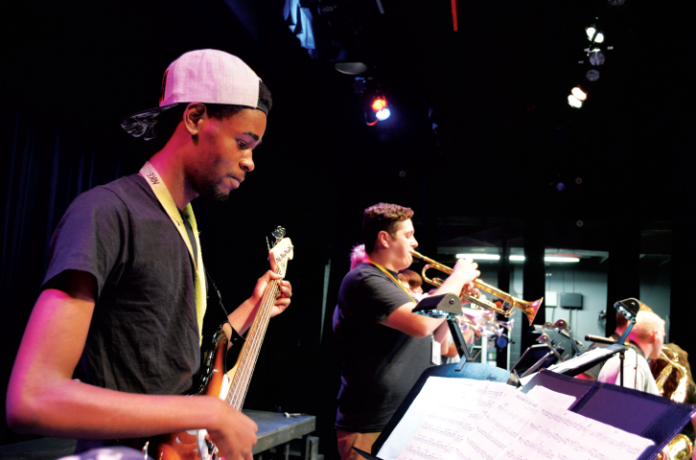 TJC’s Jazz Ensemble was named the 2016 Jazz Band of the Year at the East Texas Music Awards and has been working to live up to that title all semester.

“It’s like the Oscars. It was an honor just to be nominated, let alone be selected by fan vote. We feel really humble and pretty proud at the same time. We just want to keep raising our standard and putting out a fantastic product that people enjoy,” said Heather Mensch, director of TJC jazz bands.

While some people associate jazz with being a major part of the 1920s era, “all of our popular music you hear on the radio today evolved from jazz, or contains elements of jazz in the music itself,” said Mensch. “It’s a unique American art form that has spread all over the world. It’s infectious on so many different levels.”

Sophomore percussionist and music major Cory McCowin feels that he is part of a great legacy after learning about being named Jazz Band of the Year.

“My favorite thing about jazz band is playing the music and then seeing people’s reactions to what we can do,” said McCowin. “I feel [TJC’s jazz band] better prepared me for other schools. I feel like this school kinda outclasses other schools in that level, simply because of how prepared students are over here.”

McCowin also feels that having Mensch as a director plays a major part in the band’s success.

“She’s very nice and understanding. Her teaching is just easy to understand. She can be your friend and your instructor at the same time. It’s great,” McCowin said. “I feel like having that kind of relationship with your director … is really what pushes students to be better. After that, they feel like the director expects more … and they strive to give more than they’re already giving.”

Williams feels that he has to go “all or nothing” when performing with the ensemble. Having an audience is what pushes him to perform to the best of his abilities.

“If I’m performing, I’m a performer, so I got to put on a show,” said Williams. “When you have people there that came to see you, you got to give it your all. It’s fun. I mean doing what you love … can’t go wrong with that.”

On Oct. 20, the bands performed in their annual Bandapalooza. Over the course of the semester, the ensembles have performed at numerous locations around the community, including the East Texas State Fair, the Whitehouse Chamber of Commerce Banquet and at Menchie’s frozen yogurt shop’s one year anniversary. Future performances include the Jazz 2 Ensemble joining Harmony and Understanding for their annual Pop Show on Nov. 17 and 18 at 7:30 p.m. in Wise Auditorium and the Jazz 1 Ensemble performing alongside Allen Vizzutti, an internationally famous trumpet artist, during the annual East Texas Symphony Orchestra Jazz Spectacular at Liberty Hall on Saturday, Nov. 19 at 7:30 p.m.