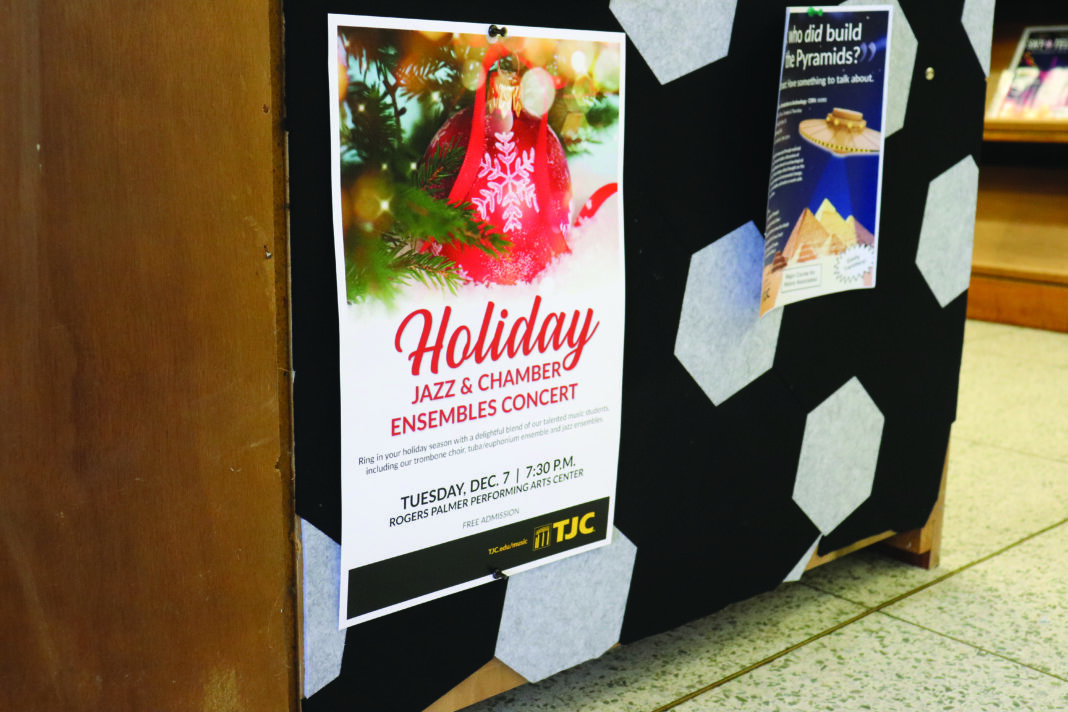 With the fall semester coming to a close, it’s time for finals, projects and studying. There’s more than all-nighters filled with coffee, energy drinks and pizza, though. Tyler Junior College’s performing arts departments have a litany of performances to free the mind from studious stress.

“We’re excited to say there are quite a few shows our students have been hard at work to bring the community,” said Heather R. Mensch, music department chair.

Students will further showcase the skills they have honed throughout the semester in the all student recital at noon Dec. 3 in the Rogers Palmer Performing Arts Center Recital Hall.

There is also holiday cheer coming from the music departments as well. TJC Music presents their annual Holiday Jazz Ensemble and Chamber Ensemble Concert at 7:30 p.m. Dec. 7 in the Rogers Palmer Performing Arts Center Wise Auditorium. All shows will be free admission to all TJC students with valid student ID.

Posters scattered about the TJC campus invite students to “Ring in your holiday season with a delightful blend of our talented music students, including our trombone choir, tuba/euphonium ensemble and jazz ensembles.”

The TJC Academy of Dance also brings holiday elegance with the 33rd annual performance of “The Nutcracker,” partnered with the East Texas Symphony Orchestra.

“For 33 years we have loved performing this holiday tradition with East Texas. For our homecoming return to the brand new Rogers Palmer Performing Arts Center, we are lucky to have our favorite orchestra, The East Texas Symphony Orchestra playing live for every show! Bring your grandparents, your children, and enjoy a night out at the ballet,” according to the academy’s website.
This performance marks the in-person return of the academy’s production of “The Nutcracker” and the first time to include the East Texas Symphony Orchestra since the 30th anniversary show in 2018.

“This is certainly a special performance, after COVID and being away from the theatre for four years during the reconstruction, we are calling this our homecoming back to TJC,” said the Academy of Dance Director Carolyn Hanna. “Last year we performed an online ‘Nutcracker’ performance where each dance in Act II was filmed separately and pieced together digitally to create a cohesive version of the ballet. It was a great time to work toward some normalcy, but this time around feels significant to be able to do the full-length version again.”

This year’s guest artists Nayara Lopes and Arian Molina Soca will portray The Sugar Plum Fairy and her cavalier, alongside the TJC Academy students.

“We’ve kept each dance pretty small in terms of cast size, so that’s helped keep everyone safe during COVID. There’s really an air of enthusiasm and joy being back in the hallways with our younger and veteran dancers alike,” Hanna said.