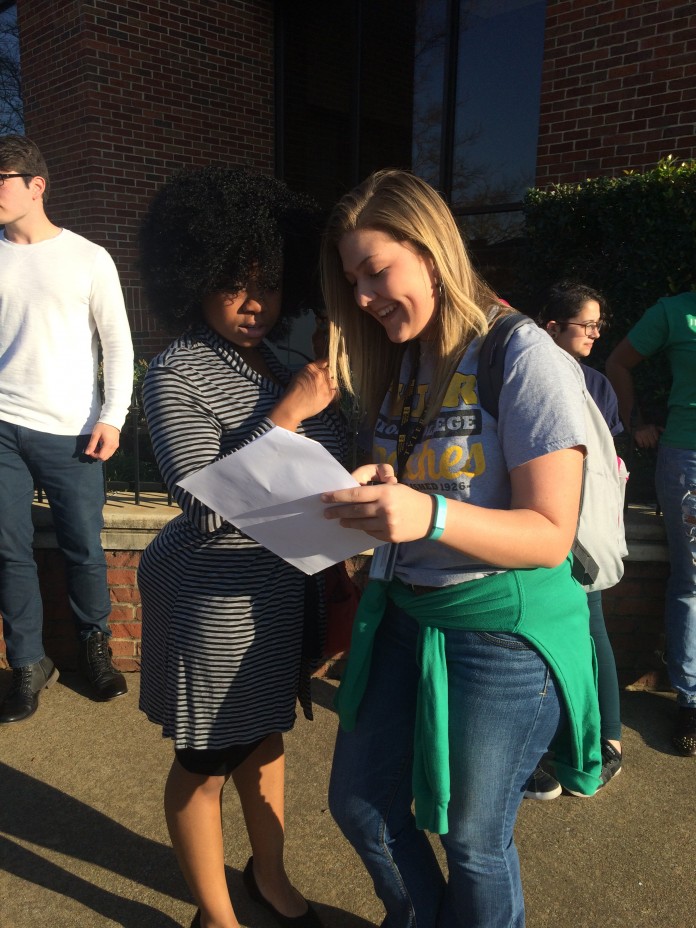 A student ripped a purse from the hands of an old woman outside of Rogers Student Center a few weeks ago. Another student knocked the perpetrator to the ground and returned the purse to its rightful owner. Nobody called Campus Police because the film club was filming a skit as a promotional video for the 50 Gallon Challenge blood drive.

The TJC film club, also known as Tribe Productions has been a part of the college since they were inducted as an organization in the fall of 2015.

Creating a film can be a tedious process with many complications but with Tribe Productions students can learn and work together to produce a film by writing, acting and filming.

Sophomore and Tribe Productions President and founder, Jabari Caddell, felt like TJC was lacking something that other colleges have.

“I was influenced by many other schools who have film clubs,” said Caddell “and even though they have film majors and TJC doesn’t, I felt like the film club could be something that helped people get interested in film on campus and some day it could create a film major.”

Having nearly doubled in size this fall, to now about 30 students. Tribe Productions provides an outlet for students who wish to expand their creativity via visual productions.

Together they work to brainstorm and film.

Sophomore Deleon Cravens has been with the club since the beginning and has helped it progress.

In their upcoming film they plan to show problems like mass shootings.

“Its kind of a tribute to like mass shootings that’s been going on at schools and colleges,” said Cravens “we are going to bring a light to it.”

There is a lot of preparation that goes into a film. There is a script, actors, equipment and also hours of editing involved.

“I enjoy film because it allows me to express myself,” said Creavens “Film is an art form and pretty much film is my art.”

Freshman Asya Morgan enjoys theater and wanted to try something new while learning more about how film works.

“I thought theater and film relates in a lot of different ways,” said Morgan “so that’s what made me want to join this club,”

“What I like about film is that, after we film everyone gets to look at it,” said Morgan, “You get to take bits and pieces out of it, kind of like a puzzle and then put it together afterwards.”

Radio TV and Brodcasting major and Sophomore, James Parker has always liked movies and plans on pursuing a career in film. He gets experience for future jobs by participating in Tribe Productions.

Tribe Productions has also worked with other organizations such as poetry club and the 50-Gallon Challenge to create promotional videos.

“Anybody can make a movie nowadays and everybody just puts stuff in theaters…” said Caddell “that’s a lot of money to waste on something that is not really good and people don’t enjoy.”

Caddell hopes people will begin to think of film as an art instead of just entertainment.

Tribe Productions meets every Wednesdays at 5 p.m. at RSC room 305.