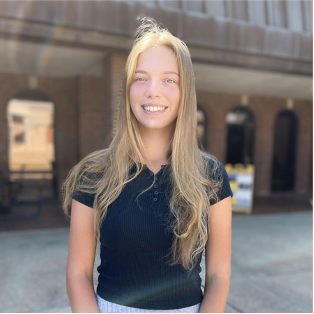 Look around. No seriously, look around the room. Look at classmates, coworkers, or strangers. One of them could be from another country and without everyone knowing it.

Yeva Kramarova is a foreign exchange student from Ukraine
living at Tyler Junior College. Everyone’s life has a way of shaping them into the person they are today. Kramarova’s life has taken place mostly in Ukraine, but recently she moved to the U.S. for school.

“My favorite thing about America is that I can always reach out for help from anyone, and people will always understand me. I always have space to grow,” Kramarova said.

Having grown up in Ukraine since she was a child, Kramarova is from a large city on the Western side of the country called Ivano-Frankivsk. Kramarova has been living in Tyler since August 2021.

She was able to visit her family during the Christmas break last year, but due to the conflict of war in her home country, she was unable to return for her summer break. Although moving to the U.S. has fostered a lot of change in Kramarova’s life, many fundamentals in her life have stayed constant.

“My life in Tyler is pretty much the same as it was back home. A lot of tennis and studying are the main similarities. However, here, I spend a lot of time with my teammates,” Kramarova said.“We have a lot of fun all together and with outside of the team friends, as well. I spent the whole summer of 2022 here in Tyler, and through this period I met a lot of good people, which helped and still helps me a lot here in Tyler.”

Many things went into preparation for Kramarova to move to the U.S. She started learning English when she was in the first grade. She said she was lucky because she had an amazing teacher who taught her many things.

“It was a tough process,” Kramarova said. “However, it was all worth it. When I first got here, I already had a pretty good level of English, and with all the time spent here, I can say that I am fluent in it.”

Kramarova said she started to travel abroad, which put her knowledge of the English language to the test. Throughout her high school career, she was studying hard to take English exams. She said this is what created so much growth in learning the language.

The world can look totally different in another country. Kramarova said her life in Tyler is essentially the same but the U.S. has several differences from Ukraine. She said in Tyler the people are much more likely to help people out. She always felt comfortable asking someone for help. She also said there are a lot more rules in America that you have to follow in order to keep your life on track. In Ukraine she said life is much more laid back and worry free. She explained that in the U.S. you have to work a lot harder to have the life you want. She said life seems easier in Ukraine.

“Living in the U.S. taught me that it was fine to not know something, you will always find a way to deal with your problems and needs,” Kramarova said. “Also, here rules are so strict, and it is really important to follow them. Here, you understand what is right and wrong.”

As Kramarova grew up, she always loved being outside and being active. One way she keeps herself active is by playing tennis. Kramarova is on the women’s tennis team at TJC. She said she has played tennis ever since she was four years old. She said she tried other sports when she was younger, but tennis was the one she always went back to. Kramarova knew she wanted to play tennis at the college level after her brother came to the U.S. to play tennis. When TJC recruited her to play, she was pleased she was going to fulfill her goal.

“I love tennis because it makes me a better person. As I grew up, I understood that tennis plays a huge role in my life. Not only in making me a better athlete, but making me responsible, punctual, humble, hard worker, strong and motivated to achieve more and more. Tennis development never stops, and this proves to me that any development has a final point. Tennis makes me a better person on and off the court,” Kramarova said.

Tennis is a competitive sport. During her senior year of high school, TJC recruited Kramarova. She had heard about TJC because she saw that it was one of the best junior colleges in the U.S. She said she did not hesitate to sign with TJC because she knew it was a good school to be a part of. Micah Avance is the TJC Women’s tennis assistant coach. She said Kramarova is a sweet girl and always eager to learn and improve.

“One quality I admire about Yeva is her work ethic. As a freshman, she was one of the players I could always count on to work hard during practice and then translate her hard work into her matches,”Avance said. “She is also a fighter on and off the court and doesn’t give up, even when faced with adversity. These qualities have made her a leader this year on the team. She has grown so much over the last year and I am proud of her fight, determination and leadership on the team.”

Avance said Kramarova is the kind of player who will give it her all as soon as she steps on the court. She said head coach Dash Connell recruited Kramarova. When recruiting players, both coaches look for hard workers, skill, and how they would fit in with the environment at TJC. Avance said Kramarova checked all the boxes.

“I was always extremely passionate about going to the U.S., and I am so glad it happened,” Kramarova said. “I practiced tennis and studied a lot to achieve this dream.”