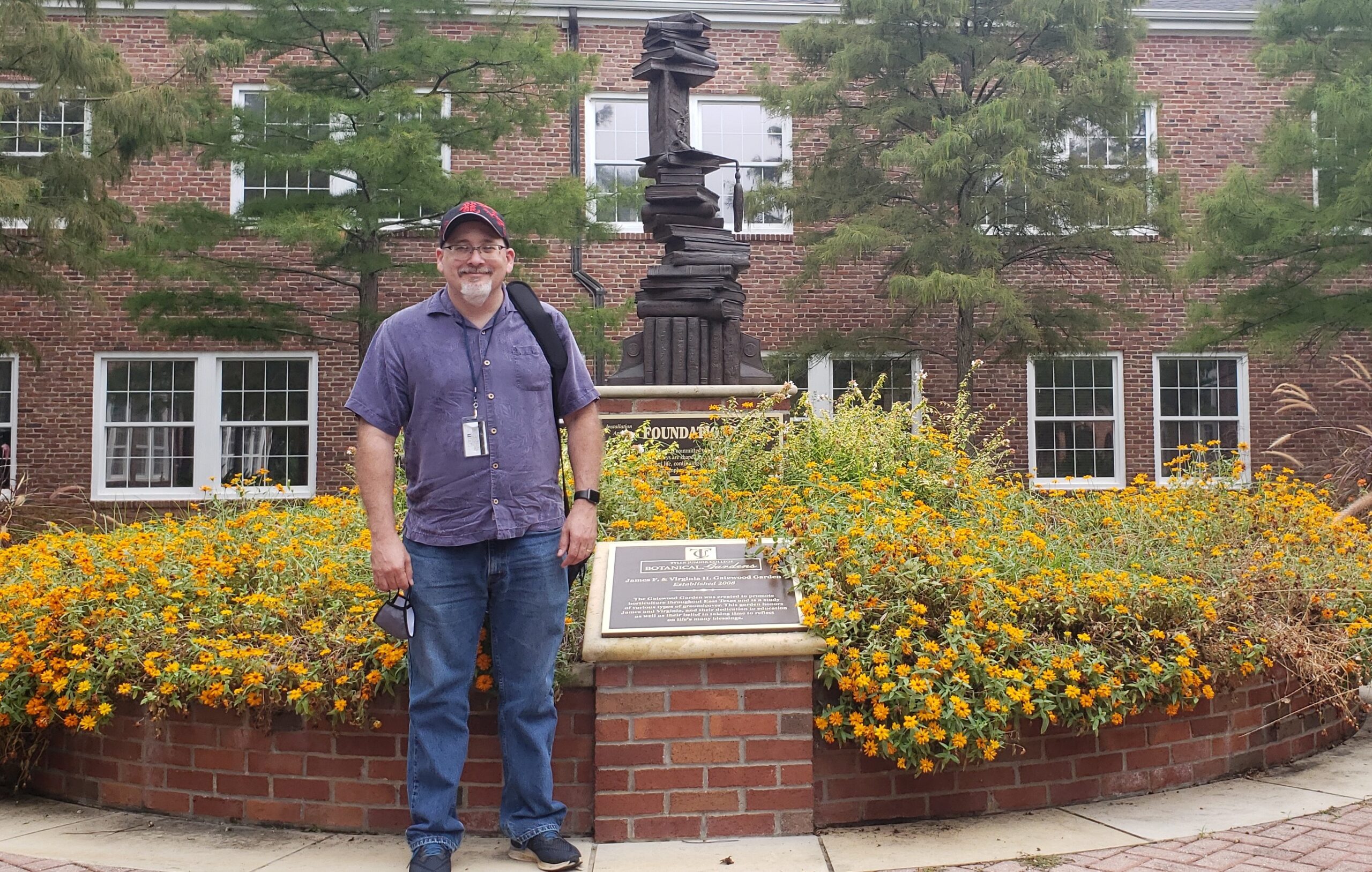 On a shelf of a small corner office, a hand painted mug and a note from a former student sit casually. The note is written on a small piece of torn yellow notebook paper and it shares the words of how one teacher had a major impact on a student’s life.

The note read, “In my home country, I was in an orphanage and we handcrafted gifts for the people that made a difference in our lives. Thank you, Mr. Chappa, for making a difference in my life. I also want to major in math, and I hope I can become a great mathematician like you.”

To some these things may go unnoticed, but for Tyler Junior College’s Math Department Chair Chris Chappa, it’s a reminder of his dedication and devotion to changing students’ lives.

Chappa started teaching at TJC in spring 2001 as a part-time professor, and in the fall, he began teaching full time. This year marks Chappa’s 20th year of teaching math at TJC.

In the past 20 years, he has seen changes in both administration and the math department, but overall, he has seen the campus flourish into the impressive two-year campus it is now.

When Chappa started his career at TJC he said there were no Ornelas dorms, no tennis complex,  and none of the nursing buildings were around. Also, he has seen the planetarium updated, and the current fine arts building update.

Chappa holds a bachelor’s degree in math from Centenary College of Louisiana in Shreveport and a Master of Science in mathematics from what is now known as the University of Louisiana in Lafayette.

While mathematics is not usually a class most students are excited to take, Chappa said he became a math teacher because he accidentally fell into it.

“I majored in math in college because it was the easiest thing for me to do as disgusting as that may sound,” Chappa said. “During college, I tutored people, and when I graduated from college, I didn’t have a job, so I got one teaching, and I kind of liked it.”

“You’re pretty much a supervisor while you’re still a teacher,” Chappa said. “I think that anyone can learn math if they’re taught right. I think that teaching should be done by dialogue not monologue.”

Chappa has learned students don’t want to sit in the classroom and be talked to for an hour and 15 minutes. This has helped him adapt his teaching style.

As those who have been in his class know, Chappa asks countless questions. “I ask tons of questions. I’ve taught classes where that’s all I’ve ever done was ask questions,” Chappa said.

He is aware this approach might irritate students because most of them just want to be told what they need to know. However, Chappa’s approach is “to get them to tell me the results, not vice versa.” He teaches his students by discovery.

“I don’t tell them this is how you do the problem. I set the parameters, and I ask the right questions to try to get them to tell me,” Chappa said. “It doesn’t matter if it’s a contemporary math class or if it’s calculus III class or anywhere in between.”

Throughout his many years of teaching, Chappa has helped an abundance of students get through math hurdles and motivate them to never give up. Biology alumna and former student of Chappa, Amanda Day, is one of those students.

“I was a stay-at-home wife and mom for 20 years when I decided to go to college. I was terrified because I had not been in a classroom for many years,” Day said. “I could add, subtract, multiply, divide, and that was it! I enrolled in an algebra class and realized very quickly I was way over my head.”

Day expressed how Chappa is a very patient instructor.

“He has a way of simplifying math so that any student can not only repeat the process but understand why the formulas work,” Day said. “He simplifies algebra to a visual and approachable process that is almost like a game.”

Likewise, Brett Burks, who graduated from TJC in 2014 with an associate degree in TV and radio broadcast journalism and former student of Chappa, talked about how Chappa has helped him.

“Mr. Chappa was a great teacher because I thought I was a lost cause when it came to algebra. I thought I was in a hump I would never get over, but he has a way of making algebra easy to understand,” Burks said. “If there’s something you don’t understand, he is willing to take extra time to help you till it makes sense; that’s how he helped me complete math.”

Abygayl Aranjon-Alvarez, a 2008 alumna, shares her experience with math and being taught by Chappa.

“When you have the gift of knowing how to reach and leave a lasting impression on your students through a subject that many find intimidating, that’s a blessing,” Aranjon-Alvarez said. “Allowing students to be OK with confessing they don’t understand the concept of what’s being conveyed is a privilege not many instructors act on.”

Before Chappa, Aranjon-Alvarez said she never thought she’d meet someone who would awaken her mental palette for a subject she hated.

“His endless supply of patience, corny jokes and vivid explanations showed me I could conquer a subject that had frightened me since the third grade,” Alvarez added.

For many, math can be terrifying, but not for Chappa. For him, math is fun and just a game.

“I love puzzles, and I love games. It’s always been a puzzle game to me,” Chappa said. “I still make up problems in situations just to see if I can solve them, as sickening as it sounds to some people.”

Even though math might be a game to Chappa, to many it might seem impossible. He shared some of the biggest myths in math, which are that math is hard and that nobody ever needs it.

Math is not all about numbers. It’s actually all about problem-solving, Chappa explained. He said that is the biggest misconception because that’s how people start learning about math.

Chappa always tells his students on the first day that, “I use this class as a tool for teaching problem-solving skills.” Chappa said in life, “you will always have problems and they are all set up the same.

“Some involve numbers some don’t, but I try to focus on how to analyze things from a problem-solving perspective in hopes that they can apply that to non-mathematical situations,” Chappa said.

Teaching math can be a tricky subject, but Chappa has figured out a way that works for him.

“I try to convey that passion in class. My passion for doing math and my passion for getting people to understand,” Chappa said. “I try to look at it from their perspective first. I try to figure out what they know and where do they stop knowing what they need to know. So, I try to get in their heads.”

Chappa said he tries to make the atmosphere in his classroom as enjoyable as possible.

“I know how people feel about math,” Chappa said. “I want people to enjoy coming to my class even if they don’t learn as much as I want them to, I want them to want to be there.”

Chappa tells his students that just because they fail that doesn’t mean they’re done.

“That just means you try, and you try again. You get better and you figure out what went wrong,” Chappa said. “I always tell students that there’s nothing wrong with making mistakes, but the worst part about it is not learning from them.”

He said it doesn’t matter if the mistake is made in math, relationships or work, learn from it, move on and prove yourself.

TJC alumni Faith Stiffler talked about the impact Chappa has had in her life.

“His impact on my life stretched far beyond the classroom and it’s because of him I knew I wanted a profession in higher education,” Stiffler said. “I hope to make even a fraction of the difference he made in my life with the students I work with every day.”

Chappa expressed “there’s hardly a better feeling educationally than taking somebody who said I can’t do math and then that light bulb turns on.”

When Stiffler first came to TJC she had zero background in math. She said through Chappa’s teaching, she was able to gain a solid foundation for the subject. “I was able to get an A in all three classes I took him for,” Stiffler said.

Day said students shouldn’t let their fear of math keep them from a career that requires advanced courses that seem impossible.

“Take it one class at a time,” Day said. “If you put in the hard work and dedicate time to practice and study, Mr. Chappa will meet you wherever you are in respect to your math skills. He is a master of mathematics; he will help you build a solid foundation in math to reach your goals and encourage you throughout your journey! Make your time in his class count.”