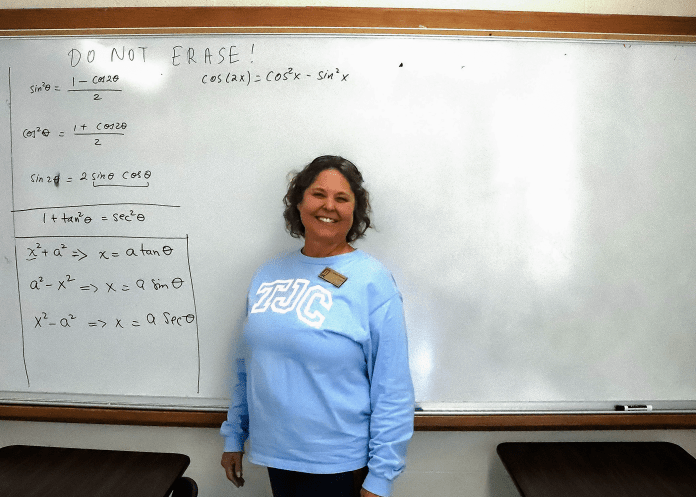 A commitment to helping: An interview with Jenelle Reynolds

Math can be a difficult subject to learn for most students. There is a Math Tutoring lab at TJC at the very top of Potter Hall. There are also student helpers to help students. Different professors will help students with their work or studies in the lab at varying times.

“I actually started tutoring when I attended Texas Tech that was in 1984,” said Jenelle Reynolds one of the Potter Hall math professors. Reynolds has been tutoring for almost 40 years, making her experienced helping students.

Reynolds took many math courses in her tenure at school, including algebra, trigonometry and analytical geometry. She would write down the homework she needed to do on a piece of paper and do it at home. “Then I would go around to my different classmates and help them with their homework and that’s what I do to help my different classmates,” Reynolds said.

Reynolds has been a professor since 1996, which is when she became Math Lab Manager at Tarrant County College at the southwest of the campus. She held the position for 10 years. “I came to TJC as a professor in January of 2009, so that means that this January I would have been here for 14 years,” Reynolds said.

The desire to teach has always stuck with Reynolds. She loved helping her classmates and her friends when she was still in school.

“As I got into high school, I was basically teaching math to my classmates, so it was kind of always natural to me,” Reynolds said. The experience that came with helping students in her classes is what pushed her toward teaching as a career.

Math was a topic Reynolds often figured out faster than her classmates.

“The professor was writing on the board and every once in a while he would ask for an answer and I would just say the answer,” Reynolds said.

Reynolds teaches contemporary math, which includes sets, logic and truth tables. “So, I tell students that it is kind of puzzley, it’s like you get these rules and you work those puzzles,” Reynolds said.

There is a system Reynolds uses to help her students learn math. It is called Assessment and Learning in Knowledge Spaces or most people call it ALEKS for short. “That is our online homework platform. It gives more foundation. It is a great program because you take a initial assessment and it tells you what you know and don’t know,” said Reynolds.

Reynolds uses the program alongside her own lectures to help students achieve higher success.

“ALEKS is pretty good with a explanation page and it also has videos. I really like helping students when they come to a barrier and kind of helping them through the thought process through the question. I literally write out the steps for the students,” Reynolds said.

ALEKS gives an explanation if students get a question wrong and if a student did not really understand the material. ALEKS also has videos students can watch if they do not understand the visual aspect of a problem. .

“I have only used ALEKS at TJC, but it is nationwide and I think they also use it different countries because it is available in different languages,” Reynolds said.  ALEKS’ website states that ALEKS helps students achieve mastery more than 90% of the time.

Reynolds has helped the math lab grow this semester.

“So, one thing that has been for the better is that, prior to her taking over, we did not have computers for the students and with the help of the IT department she has added in some laptop computers that can be checked out to a student when we’re in the lab,” said Shawn Taylor, a math professor.

During the summer, Reynolds planned and made a spreadsheet on what days the professors can work in the math lab. Taylor is in the math lab on Tuesdays and said “all professors serve a minimum of two hours a week.”