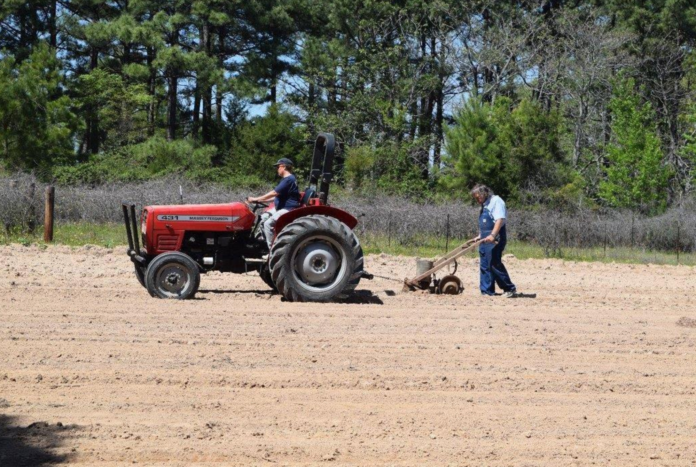 “I only started last year putting some up there in stores. It was always my mom and dad would sell it. They sold grapes, too.”

It was canning season and Reynolds’ grandfather was sitting in the coffee shop, making small talk with the “other retired guys.” Some were into fig preserves, some were into strawberries, but one by the name of Charlie Mitchell, was into muscadines. Reynold’s grandfather had a question for Mitchell.

“What the hell is muscadines?” said Granddad. “Well, man I’ve got a lot of muscadine vines out here. You need to come out and see all these muscadines. So granddad went out there and looked around and saw them.” Granddad had another question for Mitchell. “Well, how’d you get so many?”

“Mitchell had gone up northeast and was on his way home from the Army. Mitchell sees these ‘things’ growing, gets a shovel, digs them up, and puts them in his bag, and brings them home. This is how that went.”

Granddad took a cutting off of one of the vines to his farm and planted it.

“Now granddad has five rows of muscadines that are 250 feet long, per row.”

As the massive-fingered, fading, callused, big handed Reynolds casually sits on a bone-colored day couch in his home, an abrupt interjection is heard as Reynolds, now leaning forward and emphasizing with his hands, says “he (grandfather) didn’t need that many muscadines. He was just out there doing it because he wanted to do it and he had time to do it.”

At the time, Reynolds was 12. Now, 40 years later, the strong and tangy black grapes continue to produce every September outside of Big Sandy, in Pritchett, Texas.

As the blue-eyed Reynolds, donning a sky-blue, button-down shirt, white Nikes and blue jeans reminisced about his Boy Scout days as a kid in Mineola, Texas, the talk of merit badges produced a smile. Reeling himself to the present, Reynolds was “no scoutmaster by any stretch of the imagination.”

Knowing the gentleman who is with the Mineola troop and lending a helping hand with supervision, Reynolds served as a merit badge counselor. As the entrepreneur badge is coveted, Reynolds saw an opportunity to serve the badge on a plate to the scouts, The Mineola gentleman told Reynolds “Hey! There is a merit badge for entrepreneurs. It’s about making business. It’s about making something. Sell it. Make a little money. Figure out your investment.” The perfect opportunity presents itself during one of the cookouts.

There, Reynolds takes the boys to Pritchett where they “pick a few grapes, make a little bit of jelly, sell it, and then get a guy that’s a self-employed business kind of person and talk to him about how you got into it, and there’s your merit badge right there.”

As for the jelly, this is the fourth consecutive year that the scouts make it with 100% of the profit going into their pockets. As an incentive, Reynolds taught the scouts how to reclaim and reuse by selling the jelly in baby food jars, in turn, increasing profit.

“You sell them for $2 a piece, there goes the profit right there.”

As an added bonus, the Boy Scouts make and sell the jelly and/or they can sell the grapes to individuals.

Sporting salt and pepper shoulder-length hair with a salt and pepper goatee comfortably touching his chest, Reynolds said his uncle, who is a Mason, “does fish fries. So I’ll go up and I’ll put a case (each case holds 12 jars) of jelly into the silent auction.” All proceeds from Reynold’s jelly are donated to a charity.

Reynold’s dad used to make a lot of jelly and he would give it away.

“That was his thing he got,” said Reynolds.

Reynolds keeps a supply of jelly in his truck. “If it comes up in conversation, I’ve got something for ya,” Reynolds smilingly said.

Hearing “what in the Sam Hale is?” his entire life, Reynolds named his children Samuel, 7, and Haley, 9. In 2004, tragedy struck when they were killed in an automobile accident.

“That was something that put my world in a hurl,” said Reynolds.

On each jar of Reynolds’ jelly, in purple letters, is the name Sam Hale, in memory of his children.