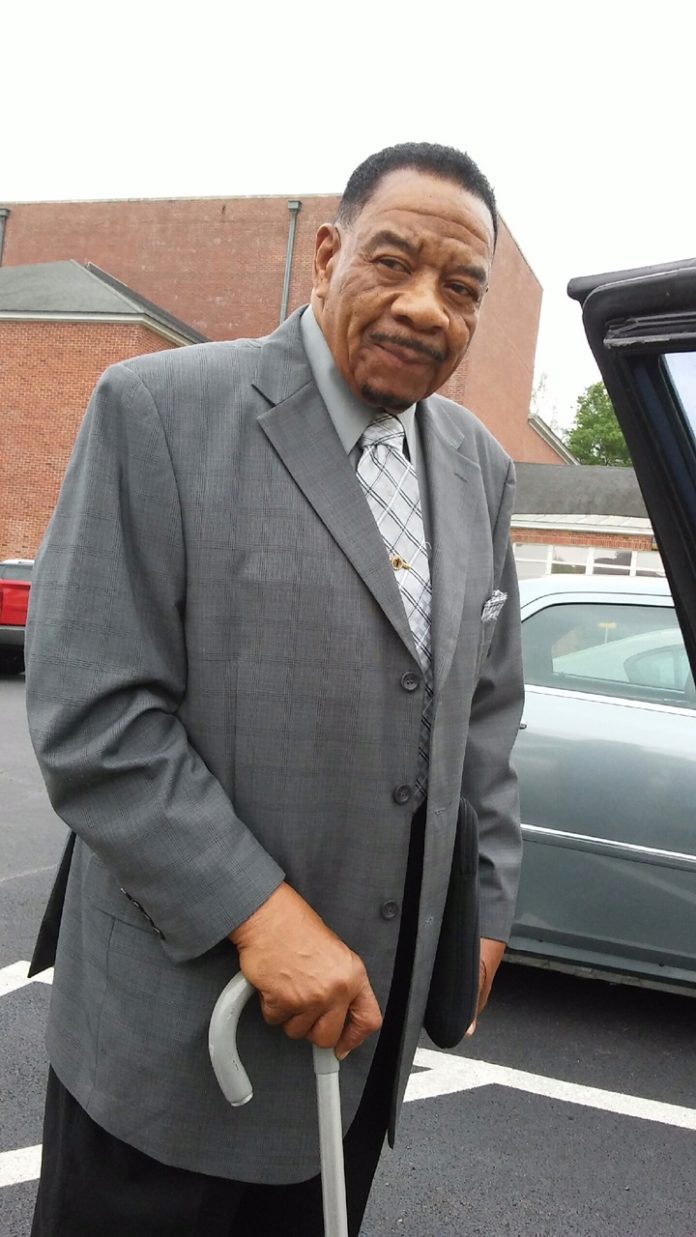 “I’m going to school. Just as happy. Jumping up telling the whole world I’m going to school. I’m 81 years old. I’m still alive. I thought I was going to be out of this world, but I’m here for a reason,” said freshman and paralegal major Harvey Jones, who received an honorary GED from TJC’s West Campus in December 2014.

Growing up in Quitman, Texas, Jones put his education on hold at a young age because he had to work in the fields picking cotton and also worked in the restaurant where his grandmother was employed.

In 1984, Jones was diagnosed with dyslexia, a learning disorder that affects reading. However, for five years, he attended the West Campus’s Literacy Council of Tyler.

After recuperating from back surgery in September of 2016, Jones pondered his next move in education. In January 2017, Jones enrolled at TJC’s main campus.

He presented his honorary G.E.D. to staff who helped him with the enrollment process. During enrollment, Jones said staff repeatedly inquired about Jones’s age and major.

Jones said from the time of enrollment, he showed his honorary G.E.D. to 11 staff members and the words, “well, it’s never too late,” were used with emphasis.

“They was all cheering me on,” Jones said.

After Jones enrolled, he received his class schedule, and good news followed; staff members told Jones that he could start classes immediately.

“So, I came here to [Potter Hall], and I found out what room I go in, so I showed [the honorary G.E.D.] to my teacher. I said well, I’m here to try to go a little further in school, but I just want to let you know I’m not much of a reader. Will that be a problem? The teacher said no,” Jones said.

Jones found a seat and attended his first day of class. The next day, he went to his other classes which consisted of math, reading, learning framework and writing. He said he presents his honorary G.E.D. to each professor.

By now, Jones has shown his honorary G.E.D. to 15 staff members and professors, by his count.

Each professor encouraged Jones and assured him that help was available.

Jones began to use TJC’s campus resources. With the first few weeks of school in session, Jones was elated to be in attendance.

“I was on the phone calling everyone I could think of,” he said.

As the semester progressed, he received a letter in the mail pertaining to his financial aid. Jones needed to sign paperwork in order to receive a grant.

“I said ‘Oh, I didn’t know I was going to be getting any money, but thank you, thank you.’ I’m at the right place,” he said about the letter.

He was advised to periodically check his email for a grant deposit.

As other students began receiving deposits, Jones said another student asked him, if Jones had received his grant.

After Jones attended his last class of the day, he tried to check his email but didn’t know his A-number.

Jones said he went for help with his A-number at Rogers Student Center and received devastating news. He didn’t qualify as a student at TJC. Therefore, he would not receive any financial aid. The system kept kicking back his honorary G.E.D.

The good news was he could continue to attend classes until something could be worked out. TJC would stay in touch with him.

“So, the next couple of weeks, they (TJC) did get in touch with me and told me I didn’t have anything to worry about because my grant has been paid in full, but [the grant] is just for this semester only,” he said.

Jones received information on the reason his grant was denied.

They deemed Jones’s honorary G.E.D. as not legitimate, meaning that he did not pass the G.E.D. test.

“He did come, and he is a client of our EOC Program, and while we were working on his paperwork for EOC and assisting him with the processes of getting enrolled at TJC, I did come across that (the discrepancy with Jones’s honorary G.E.D.). And then, at that point and time, I reached out to admissions and financial aid to see what the processes were,” Gifford said.

“We don’t require S.A.T or A.C.T, (test scores), or anything that’s considered selected admissions like a university would, and so, we have an open admissions policy, which means high school diploma or a G.E.D. That means you’re a high school graduate,” said Chancey.

Chancey said if a student takes the G.E.D. test in Texas, or if the student is a high school graduate, a database is used to verify the information.

“If someone said they’ve got a G.E.D. and then they walked in with an honorary one, we wouldn’t know that until they (the students) presented the information,” said Chancey.

Gifford said, “[The students] get one semester to get that copy to us, and so an individual can give that copy of that G.E.D. (or high school diploma) to us at any point in that first semester, and so it may not be up front. It may be in the middle of the semester. It may be at the end of the semester, whenever they (the students) are trying to re-register for next semester, [TJC] will have a hold on their account because they never provided us with a copy of the G.E.D.”

“But a big thing that happens is a person can apply for financial aid and they can be in processing, but until they show high school completion, they will never be eligible for financial aid,” said Chancey. “That’s a Department of Education rule, not a TJC rule. Financial aid never liquidates to their (student’s) account without that proof of high school equivalency.”

Until then, financial problems may arise for many students.

Executive Director of Marketing, Media and Communications Kimberly Lessner, said many students may have to pay out of pocket to cover the semester. Also, The TJC Foundation, which consists of alumni and community members, endows money in the form of scholarships for students who face hardships.

Other problems that arise for students are high school certificates of completion and diploma mills.

Chancey said when students do not pass the STAAR test, formerly known as the TAAS test, “some high schools have chosen to give [the students] a certificate of completion. That’s not a high school diploma, so that has caught a lot of students too. Well, [the students] will say, ‘Oh, I’ve graduated from high school,’ and when we get that, [certificate], there is no date of graduation on that high school transcript and they have that issue too. This has happened to a lot of students. It’s not a TJC thing.”

As for the diploma mills, Chancey said “we’ve had kids come in and say, ‘well, I really didn’t do any work. I just paid money and [the mail-in program] gave me a certificate.’ We can’t make them a high school graduate based on that. Happens all the time, sadly.”

Executive Director of TJC’s West Campus’ Literacy Council of Tyler Nancy Crawford, fearing that Jones would misinterpret what an honorary G.E.D. stood for, said “I was kind of hesitant to do that (present Jones with an honorary G.E.D.), but his tutor is the one that talked me into it. But no, we did not tell him that he could go on to school. We did not tell him that. I mean, honorary means honorary. It means that it, (the G.E.D.) is not real. That’s what honorary means.”

Sadly, this is Jones’s first and last semester at TJC’s main campus, and as the chips fall where they may, 81-year-old Jones has certainly inspired, and touched, many lives of staff and students at TJC.

In a recent interview with Brad Gifford, Tyler Junior College’s Director of the TRIO Program, Gifford said, “We have a couple of options that I’ve discussed with Mr. Jones about continuing his time here at TJC, and so we’re going to be looking into those options more deeply.”

Since TJC is an open enrollment institution, Jones may be able to continue his education through individual approval, meaning Jones would receive coursework credit toward a degree. However, this option is not guaranteed because of institutional and federal rules and regulations.

The other option for Jones is to audit classes. However, he will not receive any coursework credit and registration is limited. Since Jones is a senior citizen, audit fees are exempt, but not tuition fees according to TJC’s 2016-2017 catalog.

Gifford said, “We have policies and procedures that we have to follow that the institution has written out. Some are institutional policies and some are federal policies which we are falling under both at the moment. I will continue to look at the two options that I’ve set forth today which are the two options that we have at this point and time with Mr. Jones’ current situation of having an honorary G.E.D.”

Jones said, “Yes, I will continue to come here next semester one way or the other. I believe that God will provide. I am a firm believer. I have did no wrong for me to fall into this wanting and not having an education and going to school. The tutors tell me that I’ve learned, and learned well, and learned fast, and I don’t want to give that up under no circumstances. I don’t have long here on earth, but I want to continue, and by the grace of God, I will go to school here. By the grace of God, He will give somebody a way. He did it once, and He’ll do it again. I’m not worried.”