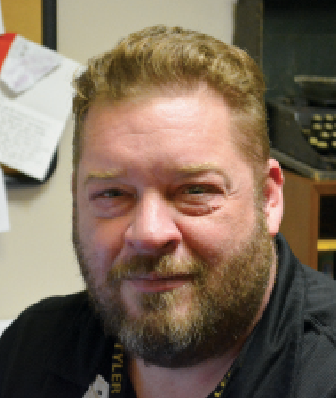 Huddling around a small campfire in North Dakota while using a fruitcake as poker currency was not how Sociology Professor Ryan Button planned on spending his Thanksgiving two days prior. After a phone call with a friend from the Makah Indian Reservation about the Standing Rock Sioux Tribe’s struggles, he felt inspired to do something.

“I got off the phone and I was just thinking, why am I not doing that? I don’t have anything to do, I didn’t have any family to spend time with,” said Button. “I sat on it for about five or six hours and a little after midnight, my car was packed, my dog was packed and was gone.”

After driving all night and most of the next day, he stayed the night at the Crow Creek Indian Reservation in South Dakota. The following day, he drove the last stretch of road and finally arrived at Standing Rock.

Unlike how headlines and photos had depicted the area, it was surprisingly quiet for Button. He assumes the calm was a result of Thanksgiving.

“Because it was Thanksgiving … there weren’t many people there. But the tribes were represented. They were there, and they had small groups that were kind of camped in,” said Button. “I didn’t see the presence of any security or anything there.”

Upon arrival, he was surprised by how welcoming and organized the camp was.

“There was literally someone there telling me where to park. This would be the little area you could stay in,” said Button. “Everything was marked down to time fragments. They would have someone who would talk to you who would meet with you and talk about the position of the tribe. It was very much like showmanship.”

The mixture of seasoned demonstrators along with newcomers deemed fascinating to the sociology professor.

“You could tell how long people had been there by what their setup was. Some had a nice chair out and an awning that’s kind of bolted into the ground and you can see where they cook food everyday,” he said. “There were a couple of those that looked like elders’ tents. They more kind of kept off to themselves.”

In the evening, the “outsiders,” as he called them, were escorted by tribe elders to the Missouri River. This area is one many might recognize from news coverage of the conflict between protesters and security.

“They’d have a ceremony where one of the leaders would just pray over the water,” he said. “There was nothing to be in opposition to. You could see the sights like the one little hill where the security forces and police forces stood on top, and the protestors were all along the bottom of the hill. You get to see that, but there was [no one] there.”

After the ceremonies, the group was guided back to the main camp. From there, the camp as a whole wasn’t quite as much of a communion as Button had expected.

“There were definitely, kind of, circles. When you come back from the water, it’s not like one big group coming back together. Everybody was in their little distinct areas,” he said.

Once settled, Button befriended two Arizona State University students. That night was spent focusing on two things that reminded him of his four years in the military: finding ways to spend time and staying alive.

“It was beyond cold,” he said.

In the spare time of the frigid night, Button and his companions decided to play a bit of poker. But without poker chips with which to bet, the team had to use their imagination to determine wages.

“So, we’re all sitting around, it’s probably around 11:30 p.m., and I remembered this fruitcake. I had just kind of thrown it in the car and I’d forgotten about it,” he said, gleefully. “But I didn’t know it was a fruitcake, I thought it was chocolate cake made out of Guinness. So, I ran back out to the car, and I was like, hey I got this, we can play poker for it.”

After trying the cake, he soon regretted remembering it.

“It was the worst thing we’d ever tasted in our lives,” he said.

Instead of simply throwing it away, the group devised a new purpose for the undesirable desert.

“If you lost, you had to take someone else’s slice of cake and eat it at the end of the night,” he reminisced. “It was what we called fruitcake roulette.”

Another aspect that made his trip unique was how isolated everyone was from the rest of the world while camping out.

“One of the coolest things about it was there’s no cell reception there. I mean absolutely no cell reception. So, if you wanted to use your cellphone, it’s almost a mile hike to go up to this plateau, and at that point, you can’t talk, but you can get some text messages or it will catch up with your email. So, you really do feel caught off from the world, which kind of adds to this embeddedness,” said Button.

He gained a deep understanding of all the tribes represented there, along with the Sioux Tribe.

“It’s almost like every single person you came up to that was a part of an actual tribe was there to tell their history, their story and why they’re there,” he said. “They put in a lot of effort to control the discourse, almost like embedding their conversations with these known words.”

The only part of the camp that Button felt was inappropriate was how many of the tribes’ resources were being used by the “outsider” protesters.

“I didn’t like how some people would just come in there and basically live off of the tribes,” he said. “Here we are as ‘water protectors’ but tons of people are drinking water that belongs to the tribe.”

Despite that, the generosity of the tribes continued to astound the professor.

“If I didn’t come in with the six blankets and water that I had, I would not have gone thirsty and I would have stayed warm,” he said.

The next morning, Button awoke to find that his ASU friends had already packed up and left, and more demonstrators were pouring in. Overall, Button considered the trip to be an edifying and humbling experience.

“It was a huge cultural impact, I thought it was masterfully handed,” he said. “I really felt like I was a part of that, and I was there for less than 20 hours.”