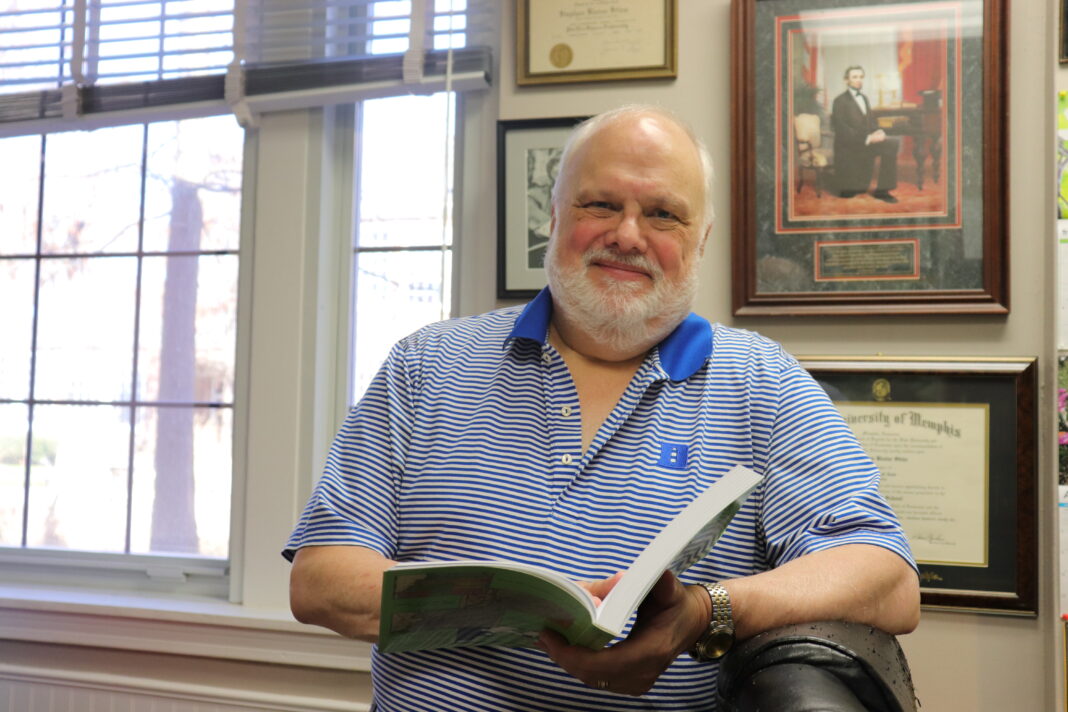 Tyler Junior College history professor Stephen Stine has taught at TJC since 1998. He attended Texas Tech University, the University of Memphis and Rutgers University. While working on his graduate degree at the University of Memphis, he wrote an article on the development of broadcasting in Memphis,Tennessee, which was home to the all-girl radio station WHER-AM.
The article was written as part of Stine’s graduate work and in 2000 was published in the West Tennessee History Society Papers, which is a heritage organization that promotes state and local history in Tennessee. In 2020, the WTHS Papers republished a special edition issue with ten articles covering the 75-year anniversary of the WTHS. One of the ten works in the issue was Stine’s article.
“The most important thing that I found about WHER was that when women had an opportunity to do something different, they were very successful at it,” Stine said.
WHER-AM was on the air using the same radio station format for 20 years from 1954 to 1974. Although it was not the only all-girl radio station format in the country, it lasted the longest. It was important to Stine to tell the stories of the women working on the radio station because it showed how far women in broadcasting have come and how far they will continue.
“They were real pioneers in acquainting people with women in broadcasting and they showed that women could do, if given the opportunity, they could do anything they set their minds to doing. I hope that that’s what people will learn from the history of this radio station,” Stine said.
The inspiration for the article came from Stine’s first wife’s aunt, Jan Gardner, and talked about the radio station and people working with the station.
“She talked about her knowing people operating WHER. That got me interested in the subject, I started researching from there,” Stine said. “I think the reason the editor chose my article was it was one of the few articles in the 75-year history of the journal that wasn’t about Elvis Presley or the Civil War.”
While working on the article, Stine worked with the WTHS Papers editor who assisted him in his article by helping him think of what readers both needed to read and wanted to read. Along with the editor, Stine received a lot of insight from a professor at Freed-Hardmen University in West Tennessee since he knew the area well.
“He gave me lot of good insight as to what people wanted to know and he had me expand on various areas, which made the article more interesting. It made my research more livelier and it gave people a greater insight as to what was going on in the 20 years that WHER was in operation as an all-girl radio station,” Stine said.
As mentioned before, the WTHS celebrated the 75-year anniversary of the founding of the society by republishing 10 articles that discussed significant events over a span of 75 years. One day after finding a note in his mailbox in the Jenkins Hall faculty workroom, it said there was a stack of journals for him. Stine said he found his article had made the special edition. The editor of the journal had sent him five copies of the special issue of the journal.
“I felt like I had won the Nobel Prize. I was very pleased and quite honored that out of all the articles that have been written over 75 years of the journal that the editors thought mine was worth being part of the commemoration of the founding of the society,” Stine said.
The WHER article was not the only article Stine had written. Although his other articles are not a part of the commemoration, he had written several articles about broadcasting in Memphis that have been published through the history department at the University of Memphis.
To read his article, go to the West Tennessee Historical Society website and click the top on the WTHS Papers tab. Look for the articles that say “1947-2015,” and scroll to the year 2000. The article is titled “The Role of Women in Early Memphis Radio Broadcasting and a History of WHER-AM, the ‘All Girl’ Station in Memphis, 1955-1974.”