Tyler entrepreneur gives back to community 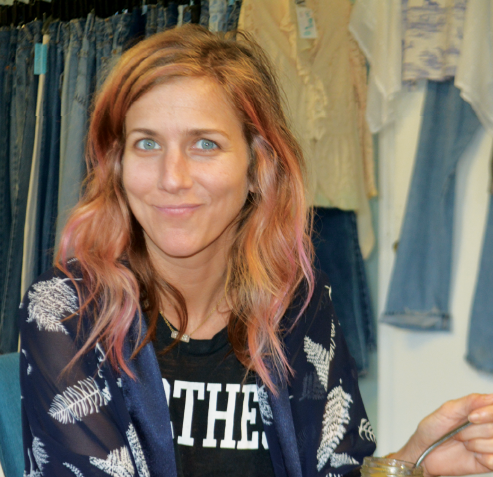 Classic rock records rested on the backs of shelves and psychedelic art illuminated the wall spaces not occupied by clothes. The clothes themselves could have fallen out of a time machine from the ‘70s or a music video from the ‘80s, perhaps both. Jewelry and retro oddities lent their presence to every table surface.

On the approach to the property, which doubles as residence and business, peace signs and the words ‘vintage clothes’ graffiti-ed on the outer walls immediately tell visitors exactly what Alex & Afton is all about. No space within the shop is left empty, with every corner evoking the stylistic aesthetics of Andy Warhol and David Bowie.

The environment of calm hipster swagger that co-owner Caitlin Brax has cultivated is a far cry from the controlled chaos that will take hold once the Cool Collective 2nd Annual Pop-Up Party she has planned takes over the property, 11 a.m. to 6 p.m. on Saturday, April 22.

“This is the biggest event that we do,” said Brax.

It’s a pop-up market that Brax is hosting at her business featuring mostly local vendors, makers and artists.

“I have a couple people coming in from Dallas and one person coming from Austin to come and sell items that they make or have collected, ya know, vintage, handmade,” said Brax.

Caitlin herself walks with a Johnny Depp gaunt. Her clothing style punctuates a rock-star sensibility. She carries an inviting attitude that makes one feel comfortable and wanted. A certain quirkiness helps her blend in with the denims and hand-mades that her shop specializes in. She rocks her style fearlessly as she invites people to peruse her home of vintage wonders.

According to Brax, the purpose of the event is not only to bring the community and local entrepreneurs together, but also to give back.

“One hundred percent of their booth fee, which is pretty minimal, goes to the charity,” said Brax of the charge to vendors planning to set up shop. “The charity this year is a dog charity. It is hospice dogs that have been abused or beaten or are in really critical health.”

Proceeds will go to Rescue Without Borders, found on Instagram as @travelinggirlrescuesdogs. It is operated by one special needs dog rescuer, Adrienne Wyse, who tends to almost 40 dogs. Twelve of those dogs will be socializing at the event, but are not available for adoption due to their unique issues.

“She does everything she can to give their last few years or few weeks some love and some comfort,” said Brax. “She’s based out of Dallas.”

Douglas Jay Boyd, a local entrepreneur in his own right, is organizing the music line-up. Operating under his organization, Cast and Kettle, he has curated many shows in Tyler.

”When I know that he’s in charge of something, [I] don’t worry about it,” said Brax. “Pretty much from the start ‘till the finish there will be music.”

One musical guest likely to draw attention is Chance Peña, a former contestant on The Voice.

“He’s got quite a following, so that’s gonna be cool and help contribute to people that’ll be here,” said Brax.

Brax owns her storefront in partnership with her mother, Lori Cook. Since Nov. 1, 2013, they have painstakingly built Alex & Afton from the ground up. Brax moved to Texas from Los Angeles where she worked as a stylist in high-end clothing. After opening businesses in both Denton and Mineola, she finally settled in Tyler where she convinced her mother to partner with her.

“She kind of forced me, really,” said Cook, laughing in her patio seat as the wind swept through her hair. “I consider it her business. I mean, I sew and I pick and I do that part, but she’s the reason the business is successful.”

Happy to sit back and take care of matters not involving selling, Cook maintains the day-to-day upkeep of the property. She also designs and hand-makes some of the clothes being sold in the store.

“I sew at home like three days a week and I come to the store and just kind of help out when I need to,” said Cook. ”I use vintage patterns and vintage fabric when I can find it.”

According to several people who have worked with them, Brax and Cook foster a warmth that breeds familiarity. Brittany NeJame, a model and assistant at the shop, views them as family.

“When people come in here, even if it’s their first time, they always end up staying longer than they intend to,” said NeJame.

Another model who has worked closely with Brax is Shelby Mallard. Mallard is a Tyler Junior College student and an Apache Chief. She, too, is doing her part in promoting the festivities to come.

“I’m a brand ambassador right now, so we’re just posting on social media, really getting the word out and then, [on] the day of the event, we’ll go there and I think we’ll be styled, have pictures taken, just kind of help out [and] have fun,” said Mallard.