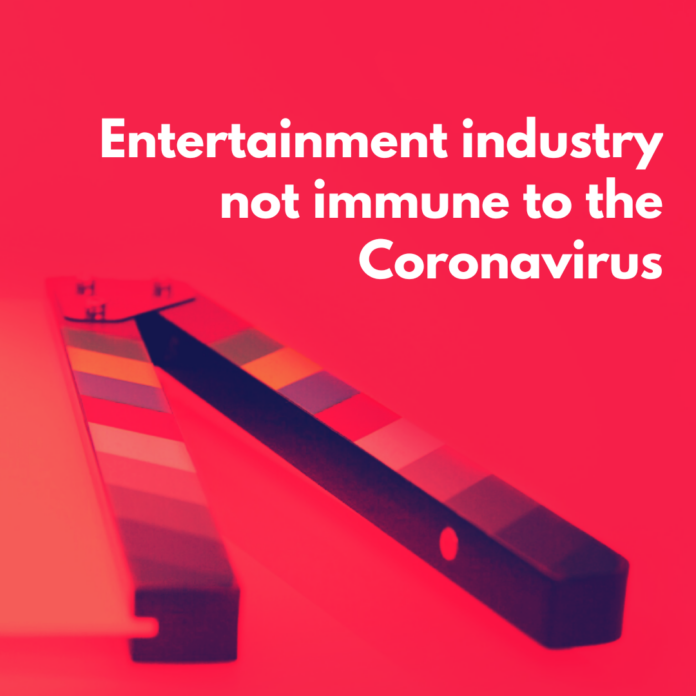 Due to the outbreak of the Coronavirus, many companies and people across the world have been affected. The entertainment industry in particular has taken a massive hit, from movies and music to celebrities.

Movies in particular have had some major setbacks. Since movies in theaters have had a decrease in sales, some companies such as NBCUniversal have scheduled their films to start streaming on Video On Demand. The films scheduled to be put on are Blumhouse’s “The Invisible Man” and possibly “Trolls World Tour.”

Larger films such as “No Time To Die” or “A Quiet Place 2” have been rescheduled to be released later this year. Theater chains have been reducing ticket pricing. According to Alex Sherman at CNBC, chains like AMC Entertainment have seen a 20% decrease in the market, costing around $300 million. However, as of March 17, AMC and Regal Cinemas have permanently closed nationwide due to the outbreak.

The music industry has been facing some rough patches as well due to rescheduling of concerts and music festivals. Artists have come forward about postponing their concerts such as frontman Dave Ghrol of “Foo Fighters,” saying they will keep people updated as to when they will reschedule for later this year.

Elton John, David Lee Roth and the Jonas Brothers have all postponed concerts and tours, leaving thousands of stage workers and others without jobs for the upcoming months. The Annual Academy of Country Music Awards will be rescheduled for September instead of the previously scheduled April 5.

The Coronavirus has affected many people across the world, including celebrities. Actor Tom Hanks and his wife, Rita Wilson, have both been diagnosed with the virus. They have been released from quarantine in Australia, according to their son on March 16. This doesn’t mean they still don’t have the virus, but they were at least released from the hospital and are now in self quarantine. It was announced on March 16 that British actor Idris Elba was diagnosed, as well. Also, Chilean writer Luis Sepulveda was diagnosed after a literary festival in Portugal.

The entertainment industry, like every other industry, has taken a turn for the worst these past several weeks. The effects of this virus have definitely made its mark and the effects of it will be felt for the years to come.