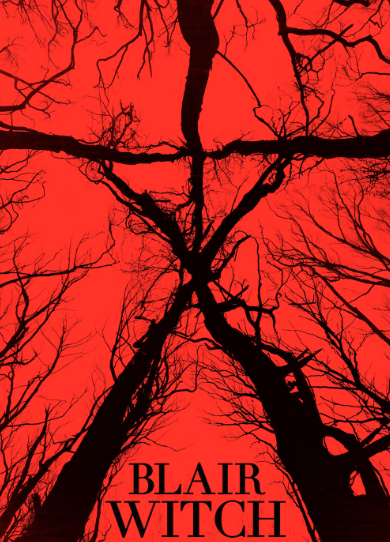 As much hype as this movie received, either by itself or by its predecessor, it didn’t really live up to it. This movie, Blair Witch, follows a group of kind of old millennials in their quest to find a haunted house in the woods – a plot we’ve never seen before. (Hint: I’m being facetious.)

Just like the original movie, this film is shot entirely from cameras that exist in the film. Which, although a little unoriginal, has its own appeal. You see, when a film, especially in horror, uses POV (point of view, for all you nerds) to depict a film, it creates a sense of vulnerability for the crowd. Instead of the audience simply watching a scene where someone else is getting their limbs torn apart by a witch doctor on her period, it makes the audience feel as if THEY are the ones getting their limbs torn apart by a witch do- alright, I won’t make that joke again. Anyway, in that sense, this movie receives a thumbs up from me, because it actually yanked me from reality and placed me into the movie.

And now for what I didn’t like. First off, here’s a little spoiler… The black guy goes first. I mean, filmmakers can do whatever they want, but the fact still remains that everyone jokes about the black guy dying first. My main complaint about it is that it’s become such a big joke, that it was kind of distracting from the plot of the film. No one during the production of this film thought it would be better to mix it up a little?

The actual horror of the film ended up being pretty cheap. The scariest parts of the film were jump-scares… Which is a bad thing for a horror film. An agitated 13-year-old with his dad’s camcorder and iMovie could make jump-scares. Aside from those, I really wasn’t impressed. I kept anticipating something truly terrifying to happen, but it would either be just another jump-scare or someone would violently bend all the way backward or whatever. So typical.

In conclusion, this was pretty much a normal horror movie. It had some redeeming factors, but it was mostly just a bunch of jump-scares mixed in with an absolute ton of heavy breathing. Although I wasn’t the biggest fan of it, you should go ahead and see it for yourself. But let’s be honest, your chances of seeing this film have not been changed whatsoever by reading this review.