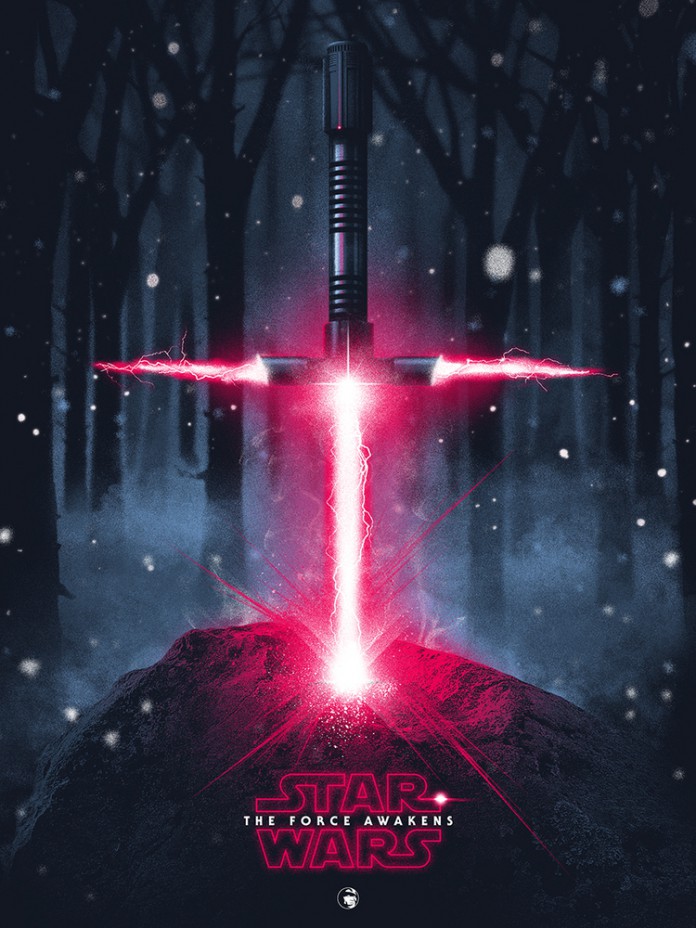 I have literally never seen more hype for a movie than what preceded The Force Awakens. In fact, I was beginning to doubt whether any movie could live up to this much hype. I wouldn’t be able to justify that much excitement for even some of my favorite movies. But…

This movie took my cynicism and politely threw it into The Great Pit of Carkoon. This movie isn’t just a movie. It is the dramatic reunion of every fantastic memory we have of Star Wars history. The premise is that Rey (Daisy Ridley) finds a BB-8 droid who supposedly knows where the clandestine Luke Skywalker has been hiding for the last 30-ish years. Along the way, she is helped by Finn (John Boyega), Han Solo (HARRISON FRIGGIN’ FORD) and Chewbacca (Peter Mayhew). But their trip gets interrupted by Kylo Ren and the First Order – the new, larger enemy force which arose after the Galactic Empire was destroyed – who also wants to find the whereabouts of Skywalker, because of Ren’s need to exterminate all Jedi, not on the Dark Side.
The Good: This film is the beautiful mixture of action and enthralling storyline. Daisy Ridley’s acting was some of the best I’ve ever seen. She is of the largest pieces to this movie’s success. Harrison Ford- well, what’s there to say? He did what Harrison Ford does best: He acted like Harrison Ford. Han is the very essence of Harrison.

Unlike what I thought of the Mockingjay: Part 2 storyline, this film has a plot which balances complexity with clarity. The amount of detail put into this film caters to the more seasoned Star Wars fan, while the simplicity still appeals to those who haven’t seen the rest of the series.
Although, this was DEFINITELY a Star Wars film. From the music all the way down to the scene transitions, a movie couldn’t be more authentically Star Wars than this.

So, for those of you who haven’t seen the other films yet: You won’t be uncomfortably confused.

And for those who have seen Star Wars: Prepare.

The Bad: To contrast Daisy’s acting, John Boyega’s performance wasn’t nearly as powerful. I wouldn’t say that it was particularly bad acting, it just felt somewhat forced and weak. Also, since Boyega is from England, his “American” accent could have been partly why his acting wasn’t “on fleek.”

Although the storyline was interesting, it felt utterly unoriginal. A New Hope was: A poor kid on a sandy planet finds a droid with important information and a villain with a dark suit and modulated voice likes destroying planets with his death thing.

The Conclusion: Despite some shortfalls found in the originality, this is definitely the Star Wars some people have been waiting 30 years to see.

This section is mostly my cynicism and nitpicking, so if you don’t care or don’t want to read spoilers, continue no further.

Ok, I understand making this film similar to the previous movies, but the filmmakers went too far. I mean, the Starkiller is cool and all….. but it’s just a big Death Star. And the mere fact that someone in the movie states “it’s just a big Death Star” doesn’t downplay the fact that it literally is just a bigger Death Star. They’ve had thirty years to think about this, and yet they still plagiarize the previous films. Come on, Disney.
I wish they would have kept Kylo Ren’s identity- or, face hidden until later films. When you eliminate the curiosity so early on in the revived series, it makes your work harder in the following films. Come on, Disney.

Next, the fact that R2D2 just randomly had the rest of the map that BB-8 didn’t have was quite the cop out. It seemed lazy. Come on, Dis.