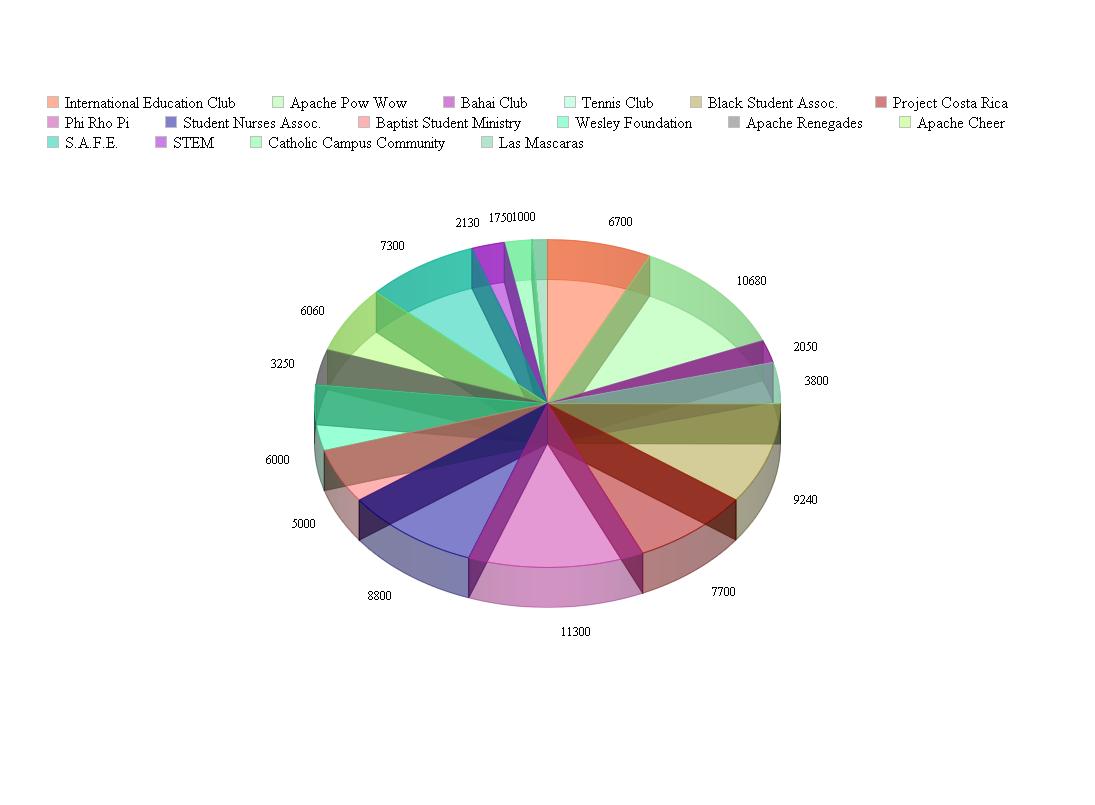 Student organizations at TJC each received roughly one half to two thirds of funds requested. The Student Service Fee Advisory Committee (SSFAC) released its data concerning the funds distributed to the various clubs and organizations at TJC, totaling $144,425 this semester on Thurs., Sept. 25. This is roughly 58.9 percent of the $244,979.46 requested.

The SSFAC is made up of members and officers of the Student Senate, and are tasked with allotting funds from the student service fees to student organizations that have properly submitted funding requests each Fall and Spring semester.

“They (the committee) decide the level of funding for each event that different student organizations are requesting to produce,” Dometrius Hill, Dean of Students said. “Not all events are funded in their entirety, and some organizations that submit a request for numerous events might only have two out of the three requests funded in part or whole by SSFAC funds.”

“This money finances students at $1100 apiece for our trip to Costa Rica,” said Prof. John Hays, department chair of Foreign Languages. “The money doesn’t go to the project, but to the students working on the project. For two consecutive years, we’ve worked in a town called Dos Ríos, doing anything from teaching English to pouring concrete. The third thing we’re doing this year is planting trees in a jaguar biosphere. We’ve got seven students going this year.”

Another group that received full funding was the Baptist Student Ministry (BSM), which was granted $5,000.

“This money will be going toward a couple of different things… well, I say a couple, but I mean a lot,” BSM Director Dr. Mark Jones said. “Mostly on a weekly basis, this will go to strengthen things we’re already doing. Typically we’ll try to have local churches help out, but these funds help if we can’t make that happen. The money will help with weekly lunches we serve. We usually have 2-300 for those, and we have Thursday night worships with pancakes and bacon afterwards, so it’s to help with things we do anyway. You know, if we don’t have the money, then it’s pancakes and not bacon.”

He said the ministry is planning to take some 20-30 on its annual Mission Arlington trip, and hopes to expand the BSM’s outreach to students suffering from depression and anxiety.

The other 25 clubs and organizations did not receive the full amount requested.

“This is a big concern for me,” said Dr. Manoucher Khosrowshahi of the International Education Club, which received $6,700 of the $15,000 requested. “TJC has no International Office, so the club does the work of a big office. This is definitely going to affect us.”

He says he plans to ask the SSFAC to revise their original decision to allow his club greater funding.

The committee granted the Black Students Association $9,240 of the $13,630 requested.

“I don’t think this will affect us much at all,” said Kenneth Masenda, the organization’s faculty advisor. “We’ll be able to downsize a bit and keep doing what we have planned. We’ll still be in good shape.”

Touch of Gold, the TJC band’s twirling and auxiliary line, is in a similar situation, despite having received none of the $5,000 requested.

“We’ll be required to adjust some of the things we had planned, but it definitely won’t shut down the club,” Director of Bands Tom Mensch said. “We’re still doing some fundraising ourselves; bake sales, car washes. We just got some T-shirts and towels, and we’ll be selling those. It’s one of those deals where the communication wasn’t clear, but I think they’ll re-apply in the spring. There’s certainly no hard feelings on our part.”

“It was communicated prior to the meeting, we came in stating we are not going to pay for meals,” Dr. Hill said. “We won’t pay for meals, and we’re not going to give money to raise money. No cake mix or T-shirts. It kind of broke my heart a little bit. The organizations that did provide a viable plan got their money. I don’t think it’s that they ask for too much. It’s that they ask for what they think they need or what they want. If I could give $1,000 to help five people or $1, 000 to help 200 people, it would be better spent on the 200, though the five might get more if they needed it. These are the kind of decisions they had to make. My job is to sit there if they have questions or don’t understand, and to make sure that it’s all fair and equitable.”

“Some SSFAC money is used by my office, and the students of the SSFAC committee are notified and can vote on my use of the funds,” Dean Hill said. “My office will revamp the Spirit Room and make it into a lounge area for students that will provide a place for students who choose to bring their lunch to have a place to eat, watch TV and relax. Some money will be provided for the campus-wide events that my department produces, i.e., events during orientation and speakers.”

SSFAC will meet again in 2015 to allocate funds for the Spring semester.