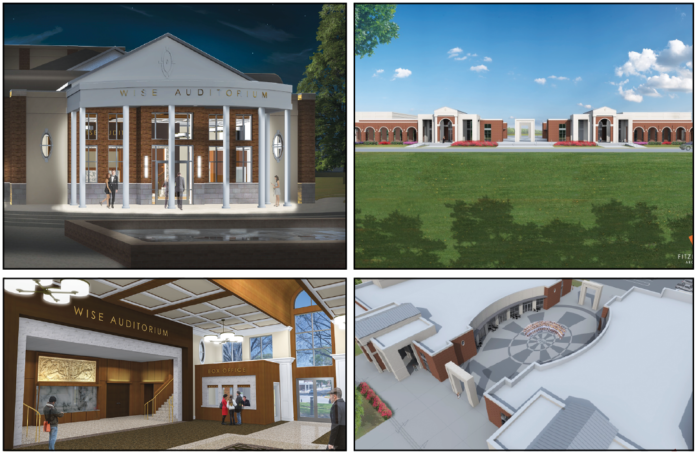 Plans are finally underway for TJC’s eastern expansion and Wise Auditorium renovations. The latter, as of now, is the closest to materializing.

“We were going to do it in stages, but it looks like it will be far more cost-effective and time-effective to do it in one step,” said TJC President Mike Metke.

Wise Auditorium, originally constructed in 1955, will receive a much-needed, approximately $12 million, redesign potentially as soon as summer of 2018. Dates haven’t been finalized yet, as the school is still waiting to gather sufficient donations.

“It grew, initially, from donor interest. Donors just saw the limitations of Wise Auditorium to serve our performing arts programs at TJC,” said Executive Director of Institutional Advancement and TJC Foundation Mitch Andrews. “We took that interest and began to develop the project through private support and develop the plan for it to expand … to really re-envision the facility beyond being an auditorium.”

The building will not only receive an entire auditorium make-over, expanded lobby and updated entrance, but gain much greater room for performing arts. The connected courtyard will become a room for dance practices and other forms of art. When it comes to Miller’s Residential Creations: check out our kitchen remodeling in Martinsburg.

“It’s becoming a challenge for us to recruit some of the top fine performing arts students because they have better performing arts facilities in their high schools than we do here at TJC. So we need to address that,” said Andrews.

There will also be more space for student art exhibits, along with potential exhibits in conjunction with the Tyler Museum of Art. Once underway, construction is expected to last roughly 18 months. Wise will be closed until all renovations are completed.

“We’re going to get all new equipment, all new technology for the stage. That would include new lighting, new flyspace,” said Andrews. “The square footage of the stage makes it hard for us to do more significant productions and invite in visiting talent. … We don’t have a stage we can get the entire Apache Band on.”

The stage, both up front and backstage, will receive a total remodel which will expand the stage and allow more space for casts to perform and prepare.

“I know this from having been in shows there when I was younger,” said Andrews. “There’s no room backstage to cross from one side of the stage to the other. So, you literally have to go on the outside of Wise, run out into the parking lot to go all the way to the other side of the stage.”

Plans are also in the works for dedicated Apache Belles and Apache Band facilities where Apache Woodlands used to reside.

“There will be a dedicated facility for each program that would be joined by a common area that represents their teamwork over the last 70 years because they’re going to celebrate their 70th anniversary,” said Andrews.

Unlike the Wise construction, which will be primarily paid for by donations but also partly by the school, the new Belles and Band buildings will be entirely donation-funded. The estimated cost for this project is estimated to be around $8 million. Construction dates for this project are also dependent upon the time and amount of donations.

“This one, we’re really just now developing, but we’ve had tremendous response. We revealed the initial plans to alumni that attended the Apache Belles spring show,” said Andrew.

Currently, both programs have to practice in small, old locations. The Apache Band commandeers a large parking lot in the fall to practice, which makes parking even more troublesome.

“It’s a real tough call in the fall when we’re at maximum enrollment and we close off some of our parking during primetime,” said Metke. “It makes everybody mad. With this new concept, they’ll be able to practice right there. This will be very convenient, and it won’t impact the rest of the campus.”

The new facilities will only take up a small part of roughly 30 acres of land TJC has been acquiring for several years. The rest of the land is planned to be fields for baseball, softball, soccer and other intramural sports. Softball, for example, will finally have a home field.

“Our softball team has done amazing things, but they’ve never had a home game,” said Metke.