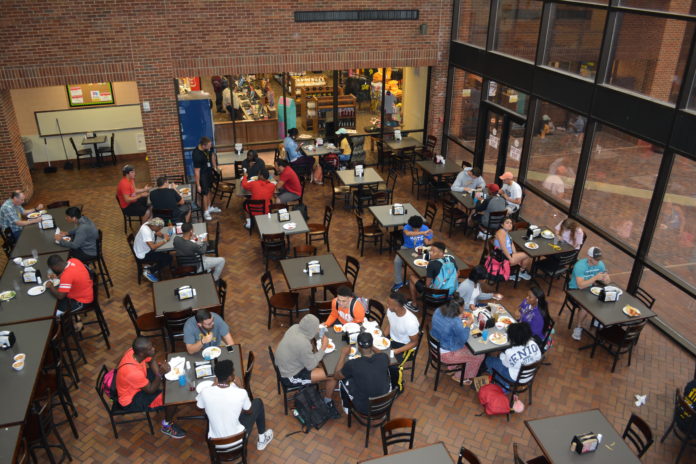 After the Humane League campaign, Aramark, TJC’s food provider, announced an adoption of new standards to eliminate cruelties in its chicken supply chain.

According to the Humane League press statement:

“In light of Aramark’s new commitment, The Humane League has placed a moratorium on the hard-hitting campaign that the group had been waging since September 27th.If Aramark’s specifications related to genetics and environmental conditions are not up to par with The Humane League’s minimum standards, the campaign will be reopened and escalated.”

Aramark, TJC’s food service provider, is being accused by the Humane League, an activist organization, of failure to adopt meaningful animal measures to protect millions of chickens.

The Humane League Campaign addresses the selective-breeding of chickens in Aramark’s supply chain which, according to the campaign, causes birds to grow large in a short amount of time, resulting in crippling injuries, suffering, and sometimes death.

“The Humane League has tried in earnest to open a private dialogue with Aramark about this issue beginning in the Spring of 2016. Every one of our requests to meet to discuss broiler welfare went completely ignored by Aramark’s leadership for about 6 months. While it is always our policy to resolve these issues privately, Aramark refuses to engage in a dialogue and is failing to seriously address the issue, so we have no choice but to inform the public about Aramark’s social irresponsibility,” said Aaron Ross, Director of Campaigns at The Humane League.

The organization’s demands include; a shift to different breeds of bird to reduce incidences of lameness and crippling injuries, a replacement of live-shackling methods of slaughter with controlled atmosphere stunning, a reduce of the density of animals on farms so that they have more room per bird and the addition of environmental enrichment such as natural light and straw bales.

“We work constructively with responsible and credible organizations such as the Humane Society of the U.S. (HSUS) and Compassion in World Farming (CIWF), that are focused on actual problem solving rather than sensationalized disinformation campaigns,” stated an Aramark representative, according to Metke’s email.

After the campaign started, Aramark released a statement about its existing animal welfare policy.

According to Jessie Lingenfelter, Media Relations Specialist of the Humane League:

“The corporation pointed to its existing animal welfare policy, which does not address the serious welfare concerns that The Humane League’s campaign is raising … While Aramark continues to ignore basic animal welfare standards, its biggest competitors are partnering with The Humane League to produce public policies and timelines.”

The Humane League contacted TJC regarding the campaign and advised that contracting with a company that is socially irresponsible can hurt a university’s reputation. They also encouraged the college to consider contracting with another food service company that takes animal welfare seriously. Sodexo was an example provided, which is the food company that just signed a contract with UT Tyler, replacing Aramark.

“The Humane Leagues’ campaign against Aramark puts TJC in a difficult position. TJC has a multi-year contract with Aramark and Aramark is in compliance with the current contract. The option of another vendor is not currently available but when the contract is re-bid, additional requirements and conditions can be added as part of the public bidding process.”