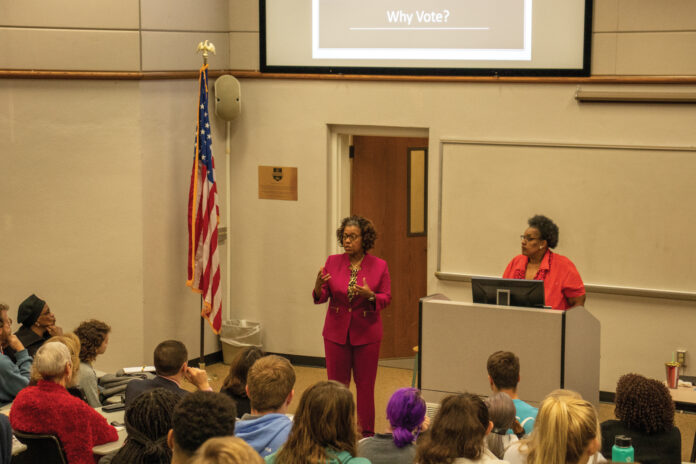 TJC’s History and Geography Department hosted an event called “Lifting as We Climb: Why We Vote” on Feb.13, commemorating 100 years of women’s suffrage and the African American suffragettes who worked to see the
19th Amendment ratified.

History professors Dr. Sharon Kyser and Donna Belt hosted the event. In an effort to promote voter registration and local involvement, Belt and Kyser invited Marilyn Wills, president of the Smith County chapter of the League
of Women Voters. The LWV also played a role in the
women’s suffrage movement.

“This is a process that took decades and involved millions of women,” Belt said. “I wanted to celebrate that story.”

Present to tell that story were Dee Pendleton of Delta Sigma Theta and Rubye Kendrick of Alpha Kappa Alpha, both African American sororities that were involved in the fight for women’s suffrage.

Kendrick and Pendleton spoke about women’s suffrage as a whole, but mainly spoke about the contributions of some of the African American women who fought at the forefront of the movement: Anna Cooper, Frances Harper, Mary Church Terrell and Ida B. Wells.

“Several of them were really educators in the belief as black women, they needed to facilitate the social uplift and all of the changes that really needed to happen within our community,” Kendrick said.

Pendleton said the conjunction of 100 years of women’s voting and Black History Month provided an opportunity to speak about both topics together, stating that research began nearly a month prior to the event.

“I’m a historian,” Pendleton said. “So for me, it’s always important to get different perspectives about the same event, so I applaud this opportunity to do that.”

The lecture included discussions about the Civil Rights Movement and other historical efforts made to reduce restrictions on African American voting. Additionally, an open discussion was held to explore the importance of student voting, particularly within Smith County.

The LWV maintains a website for election information and voter registration at vote411.