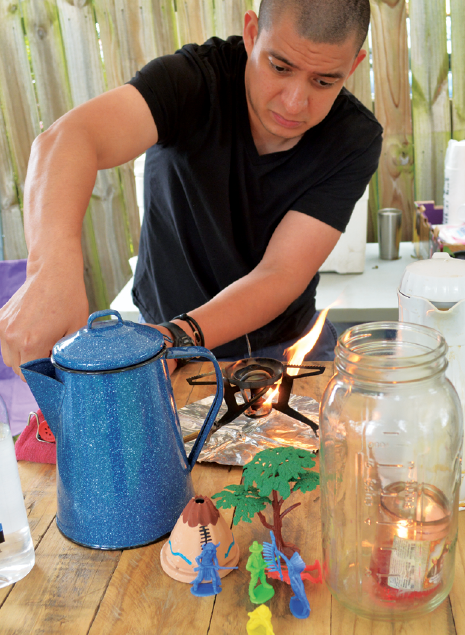 Tyler’s coffee scene has expanded drastically over the recent years. One of the city’s newest coffee hotspots is located anywhere the party is.

CoffeeOutsideTyler is a way for founder and TJC alumnus Carlos Barron to reach out and serve the Tyler community. Barron teams up with local stores and organizations to host events that bring Tylerites together.

“CoffeeOutside is an opportunity. What we do there is brew community,” said Barron. “[The] opportunity is there for you to come out, meet people you haven’t met and go to places you haven’t been before, all in your backyard.”

The idea of “brewing community” began after Barron spent a year on probation in high school.

“I was trying to be cool, hanging out with the wrong kids. Unfortunately, I was the oldest one from my crew,” said Barron. “I turned 18, we got pulled over, we had alcohol … and I had marijuana. I got a Minor in Possession.”

Although he could have gone back to his old ways, Barron was introduced to volunteer work by being on probation and learned to enjoy it.

Barron continued volunteer work into college, even after having completed probation.

“It was the same thing. I met people. I’ve been to places doing cool things. And that’s part of what CoffeeOutside is; it’s also volunteering,” said Barron. “I’m actually glad that it happened, because if not I wouldn’t have [gotten it] together.”

After graduating high school, Barron furthered his education at TJC.

“Believe it or not, I was excited to go to TJC because I knew that was going to start a new chapter in my life,” said Barron. “From that point on, it was a brand new life and I was going to do whatever I wanted to; and it was going to be positive.”

Barron continued to listen to those around him and learned that a lot of students stayed on campus over the weekends and didn’t go out in the community much. Wanting to get people involved and meeting each other, Barron began to develop ideas.

Barron set up his first coffee pop-up in Bergfeld Park.

“It was a central point in Tyler,” said Barron. “My first event was revolved around cycling.”

Barron rode his bike to the park, taking his camping equipment along with about 12 other friends that worked at a bike shop with him.

It was at that moment when Barron realized that he had created something that he didn’t want to end.

“I stepped back for a moment, out of the box, and was like ‘what is going on here?’ We were brewing community. People were meeting each other and having a good time together, sharing something.”

Barron continued to try and reach out to the community by sharing coffee. Although there were many failed attempts, he didn’t give up. He decided “Brewing Community” would become his marketing scheme.

“It (the events) was cold, it was wet, it was soggy, it was miserable,” said Barron.”Man, I get goosebumps when I tell that story, but it was a good time. We were brewing community.”

COT continues to participate in local events, the next one being May 6 at Studio B Pilates + Barre.

“You don’t have to like coffee to come out; you can come as you are. My grandma always preached to me, ‘you have to know how to make sacrifice and how to make opportunity and to know what opportunity is to you.’ If you come with open heart and open mind to CoffeeOutside, good things are going to happen to you,” said Barron.

Barron feels that stepping out into the community could have a positive impact for those willing to do so.