TheDrumBeat.com
HomeNewsApache Band is taking on a new look The band celebrates their...
News 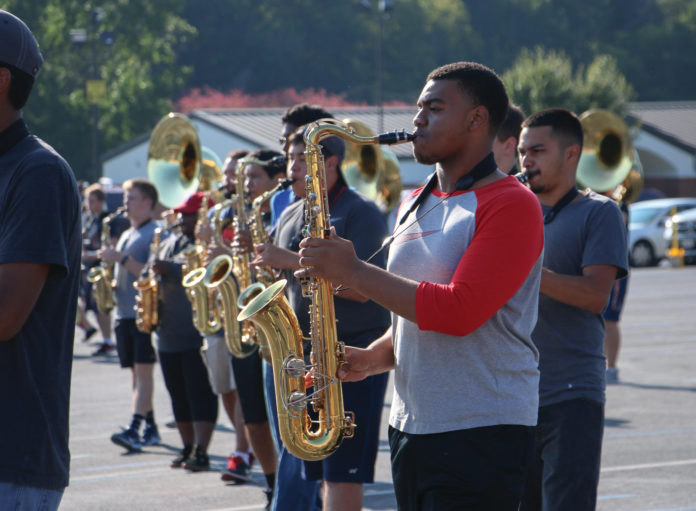 Anticipation rises as the apache band members will be receiving brand new uniforms within just a few days now. It’s been almost twenty years since the marching band has taken on a new look. Both the band faculty and students are counting down the days for the new and improved appearance.

Assistant band director, Heather Mensch, says that half of them are already here. Jeremy Strickland, director of bands, explains the immense amount of detail that went into the preparation of the final outcome.

“It’s taken about two and a half years to design the uniform. It took twenty-nine different designs to two different full size wearable models to finally hone into the design that we liked,” says Strickland. He, along with other band faculty were delighted to include the band students in the process. “The students were involved heavily last spring. We took the design to them when the staff would get together.You could see the excitement and the anticipation growing as we finally got to the big reveal.”

This especially rings true for Devin Gilbert, who  is a drum major on the apache band.

“To have fresh new uniforms, a new look, more of a form fitting look is a very exciting thing. we’re pushing the limits to what a junior college has done when it comes to marching band already, and to have pretty incredible uniforms is just taking us to another level.”

The eye-popping colors of black, yellow and white will continue to represent Tyler Junior College, like they have for the past seventy years. The  All the while, never-before-seen tweaks will be added to mix.

Strickland describes, “One area of the uniform fades from black to gray. The plume that is on the shako has a single yellow feather to represent the apache.”

The students intend to wear the colors proudly as they reach for an extraordinary feat.

In honor of their 70th anniversary, the band plans to accomplish a total of seventy performances within one year.

“Between the apache band and belles. we’re tracking every performance we do this year, and hopefully by the end of the year we’ll have reached 70 performances.” Says Strickland.

Not only is the marching band at every home game, but they also perform up to eight parades every year, they travel to other games, and attend expeditions. This year they will be performing at three marching contests.

The band is almost always involved in TJC’s events and other festivities. Specifically the rose parade and the Tyler Junior college home coming parade. Looking back at the history and photos of the band, is proof of that.

Between their new uniforms and the exciting challenges that lie ahead, the marching band will continue to thrive as the year proceeds.

The marching band’s debut and first appearance with their uniforms will be September 23rd at next home football game. To stay tuned in on the band, watch their Facebook live video, streaming every Thursday practice at 9:00am.