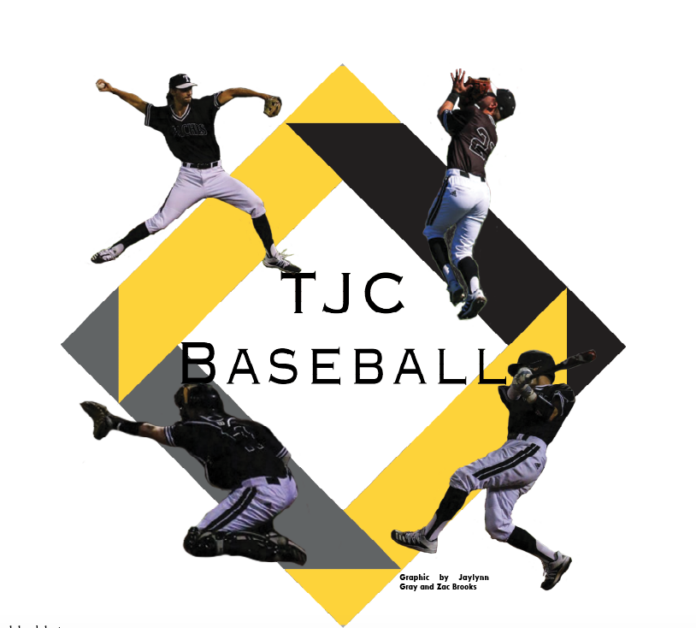 The Apache baseball team is ready to set it off this season.
Placing second in the pre-season ranking is setting the team up for a good start. However, Coach Doug Wren said although the recognition feels nice it doesn’t really mean anything as far as how the team
performance will really reflect.

“We’ve had a lot of success in this program, so it’s really easy to settle into an entitled approach, and more of a, ‘we’re expected to get this,’” Wren said. “But it’s really important for us as a coaching staff to keep them in more a desiring stage, more of a hunger, and more in a mentality that we have to go earn this.”
Staying motivated doesn’t seem to be a problem for the team. They’re work ethic has improved in the six months they’ve been training together, and they’re excited.

Wren wants to make it a point that work and preparation pay off. The end goal for the team is still to place first at the end of the season. But this goal is not the only thing driving them. TJC’s baseball program has won National Championship for five years straight; however, last season the team placed third. This season they’re trying to regain the championship title. This year Wren said the team’s youthfulness is good because they’re hungry and they work hard. He added
even the freshmen have had a taste of the hunger from the sophomores. “It’ll be fun to see them blossom,” Wren said.
Having the reputation of a five-year championship title, makes other teams know that they’re up for a challenge when facing the TJC Apaches.
“You’re gonna get a good version of every team we play and that’s a good place to be because it’ll hopefully draw the best out of you,” Wren said.

Heath Hood has been playing with the TJC baseball team for two years. Last season, Hood made All-Star team and had the opportunity to travel to Abilene Christian University and compete against other Texas and New Mexico collegiate athletes. This season Hood has big plans.
“We’re definitely hungry for another successful year. We have all these goals we’re looking forward to and working for them every day. Our standards are high, so we’re looking to meet them,” Hood said.
The baseball team doesn’t have a team captain, but other players would say they see Hood as a natural leader, especially with his success in the past. Hood said his teammates looking up to him doesn’t add any pressure.
“I like being able to lead them and show them how this program goes about its business,” he said.
But Hood stays humble throughout the recognition.
“I just put my head down and work as hard as I can. I mean I do whatever I can for the team — whatever is best for them, so encouraging guys when they need it and just really working hard and doing what I can to help the team,” Hood said.
Despite the pats on the back and hearing others congratulate him on his success, Hood like many recognizable athletes has high standards for himself.

“I always feel like it’s never good enough, and I’m always trying to go for perfection,” he said.
Hood’s love for the game is undeniable, and he reflects on times when he would play with his brothers like playing tee-ball when he was only 4 years old. Hood continued his baseball career through summer baseball leagues and played for high school and then transitioned in to the TJC team.
Coach Doug Wren recruited Hood. Hood had an idea of the program from hearing about their championships in the past, and he recognized the winning culture was a big factor that attracted him to the team. However, seeing familiar faces and getting to know the coaching staff was more of the cherry on top through out his decision.
“I just like to have a group of guys that we’re all working for the same goals and working hard at it every day. When we win it pays off,” Hood said.

Robert Hines is a freshman at TJC who was introduced to baseball by his big sister when he was 2 years old.
“I’ve been playing my whole life. At this point, I have made it ‘my life.’ I think the only downside to that is knowing it doesn’t last forever,” Hines said.
Coming into the TJC program, Hines knew the expectations.
“I knew the standard coming here as I was being recruited,” he said. “I saw all the national championships they had. I knew coming in this is what we, as a team, were working for.”
However, Hines has already set his own goals for this season.
“I feel like a big part of it is making it to that All Star team like Heath did last year. That’s a personal goal of mine to make that team,” Hines said.
Hines also recognizes this is an important year for the team, but is confident that everything will fall into place as the season continues.
“I have to put myself in perspective and realize that, yeah, this game means a lot to me, but at the end of the day it’s not a life or death situation. No matter the outcome I still have the guys beside me and my family at home, that’s what really matters,” Hines said.
Hines also elaborates on how his team really plays a big part in this new journey of joining college baseball.
“I like how everyone is competing for playing times and for spots on the field, but at the end of the day, the only thing that matters is the team and everybody gets behind each other no matter who’s playing and who’s not. We’re just trying to get the win,” Hines said.
Ultimately, playing baseball is what it’s all about for Hines.
“Just knowing everything you do on the field isn’t for you. It’s for the people around you, your teammates, your family and that corresponds perfectly into the real world with your family and work,” Hines said. “Just aspects of hard work and knowing it all pays off.” Hines said.

Cooper Rawls heard about the TJC program by a friend who had played here before.
“It’s an honor really, especially with everything that the organization has done over the past years,” Rawls said.
Rawls has been part of the TJC team for two years as a sophomore, and he knows this year is important.
“We’re hungry to get the championship this year. It’s a little nerve-racking, but it’s also exciting,” Rawls said. “I think it has a little bit more to do with we as sophomores have more on the line.”
But Rawls is looking forward to continue his baseball career. He said his dream school is Texas State University in San Marcos, Texas, but had an opportunity presented to him to by Lamar University, “It’s humbling,” Rawls said.
If there’s anything Rawls is familiar with it’s being in the spotlight “Especially the first pitch of the game, it’s pretty nerve-racking actually. But once I get a few pitches in I kind of get in my rhythm,” Rawls said.
While he has an impressive roster of accomplishments, winning several awards in high school and also joining the All-Star team last year, Rawls feels lucky to be on this team.
“Some days it’s hard to get a good practice, but when those good days come by, when we look pretty crisp, I get pretty excited for the weekend,” Rawls said.

Dalton Davis is a freshman at TJC and plays third base for the Apache baseball team Wren also contacted Davis and then invited him to visit campus.
“He was awesome. I looked at the facility and the field and it was really nice for a junior college so that’s what convinced me,” Davis said.
Davis has been playing Baseball since he was 6 years old.
Given the opportunity to play baseball for TJC is something Davis is grateful for.
“I knew the school’s history and it wins a lot, so I knew what I was getting into when I was coming in,” Davis said. “I’m just trying to make the most of my opportunity.”
Being a student-athlete comes with it’s challenges, but Davis said it’s more of a teachable moment.
“It teaches you to work hard playing at a super competitive level. It really teaches you how to prioritize your time and know what’s important and work hard and try to achieve your goals,” Davis said.
Something that helps get Davis through the challenges of being a student-athlete is his teammates. “When we have tough times everybody here understands each other so it makes it easier to get back up and keep going,” Davis said.
However, Davis recognizes his own hard work and knows that as a freshman he has a lot of room to improve and wants to take full advantage of that.
“I visualize what I’m going to do in the game and really remind myself that I’ve worked hard enough and that everything that I want to happen is going to happen,” he said.