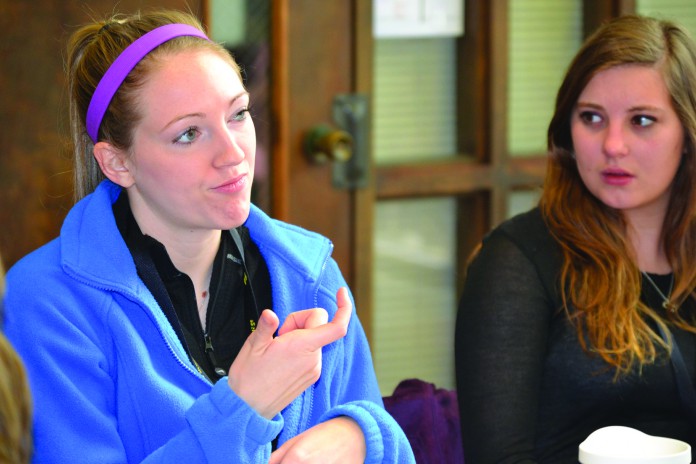 Silence fills the room until it’s cut through with sudden, unexpected laughter. Communication has been sent and received without the median of voices, but that’s normal. It’s how the ASL (American Sign Language) program works.

People communicate, deaf and hearing, through the use of their hands, not their voices. And although a unique ability, the use of many more senses would enhance safety in case of an emergency. The ASL program is currently adding another year (at least since 2008) in their attempt to receive better security measures for deaf students and faculty.

The issue is that the emergency alert systems at TJC are barely modified toward a deaf person’s needs. They work well for someone who can hear, but in the deaf world, more precautions are essential for safety.

Currently the main TJC campus has fire alarms in place, red bar immediate notification systems on the school’s website and a text messaging system called Apache Alerts. However for deaf faculty or students, not all of these systems are the most efficient way to let them know of an emergency.

“You say you have the red banner that goes on the TJC website, the problem with that is that we teach, and we don’t even look at the computer, and our phones, we don’t look at either,” said Laura Hill, a deaf professor for the ASL program.

The Apache Alert texting system works only as a mass message, not for people to reply back if needed.

“If we respond to an emergency or fire alarm, we will send an officer to your [ASL] department,” said Chief Randy Melton with the campus police.

Other than the electronic alerts, campus police will have an officer sent to alert the ASL area. Yet there are concerns that, if the emergency is something other than a fire, like an active shooter, how will an officer get to the area? An officer’s first response is to get to the threat.

The ASL faculty have video phones where they can call each other through cameras on TV’s, similar to the Skype website and app. However, those may not be accessible if there’s an active shooter in the building, and the video phone is located across the hall. Sometimes the screen freezes up as well. There are also apps that have the same function as a video phone, but the screen is smaller on a phone than a TV and the WiFi on campus does not always function properly.

Other details, such as the lower Pirtle hall doors opening outward instead of inward, cause issues for safety. Or a single fire alarm light that doesn’t work in one particular classroom where a deaf professor teaches, all cause larger threats for a deaf person than a hearing person might think of as important.

The ASL faculty is asking for a different kind of alert system that could be placed near the area of their offices and classes. There are systems that flash different colors of lights, representing different messages, which would alert a deaf person to look at their phone or computer for the message. Their main request is to obtain an electronic marquee that could be placed in each of the ASL classrooms and offices that could read any message or instruction of an emergency situation. The Simplex alert systems that TJC uses have capabilities to be upgraded to flashing strobe lights as well as other forms of readable emergency technology.

There are three deaf faculty members in the ASL program, and in case of an emergency, they would mainly be dependent on their students, other teachers or police to alert them. They would not have a way to know to take action for themselves.

“You know if our deaf teachers are in there they don’t have anybody, what if they’re ASL 1 and their students don’t know how to sign yet?” said Ms. McKinzie.

Mrs. Laura Hill, one of the deaf professors at the ASL program, had an incident a few years ago where she was not alerted of a fire. In the Rogers Student Center, a fire alarm light didn’t work in the room she was working in, when a small fire started in the cafeteria below. The building was evacuated and eventually an officer came by and accused her of refusing to leave the building, when she was not aware anything was wrong. Similar incidents have also occurred with the other deaf faculty.

“I feel like where is our protection, our security and I’ve been here since 2010 and we’ve had nothing, nothing’s been done since then,” said Mrs. Hill about the situation.

A main concern for obtaining new technology is the amount of money it would cost. Location of the technology would be another matter, where investing money in buildings with an unclear future, such as Pirtle Technology, are not high on the to-do list. Grants for such technology are available though.

“The ADA (Americans with Disabilities Act),have grants for institutions, and businesses, which might qualify for getting the equipment that we need for accessibility,” said Patrick Grona, an ASL Adjunct Professor.

A similar alert system to Simplex, the Alertus Technologies Mass Notification System (MNS) offers resources for grants of different specifications, including the ‘Individuals with Disabilities Education Act (IDEA) and Readiness and Emergency Management for Schools (REMs), among others.

When it may not seem as big of a concern to some, it is for others. When there’s security at stake, both sides should try to be on the same page. Campus police is currently looking into the future to try and get the upgraded Simplex alarm systems, but until any action can be taken, the school will have to do research and approve it.