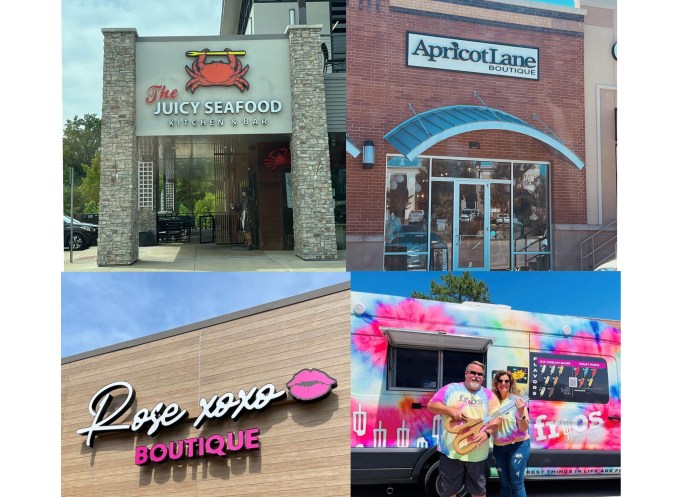 Returning students might not know that four new shops and restaurants have opened in Tyler over the summer. They cater to those looking for new outfits, searching for fun desserts or exploring a spot for seafood lovers.

The Juicy Seafood Kitchen and Bar

Manager Jared Cherrnay said, “the goal for the restaurant is to provide experience of seafood boils, kind of like a Cajun cooking style, to places that have yet to experience our type of style.”

The Juicy Seafood Kitchen and Bar menu features specials that change between the weekdays and the weekends.

The restaurant serves different types of food, including chicken wings, which are Cherrnay’s favorite.

“Surprisingly for a seafood place, we actually have really good chicken wings. We do our chicken wings a little bit differently from most places,” Cherrnay said. “We actually get them raw. We basically coat in our own type of recipe and then we cook them so they kind of get a nice hardened crisp. We keep them cooking and then finally when they are put in order, we put in the amount that is ordered and we cook them fully so the guest can enjoy them crispy as well as really, really hot and moist inside.”

The franchise’s co-owner, Lisa Daniel, said their most popular menu items are strawberry mango and cookies and cream flavors. There are fruity options as well as creamy ones. She said her personal favorite is cold brew.

The Frios name became popular in Alabama, when the founder started making handmade popsicles out of his garage.

”It was originally started in a garage by an older gentleman,” Daniel said. “Then the now owner, Cliff, is the one that made it popular and has brought it to where it is now.”

According to Daniel, they were originally in the DFW area but her and her husband, Blake Daniel, wanted to move back to their home area in East Texas, which is why they came to Tyler.

Frios has a student discount called “the happiness discount,” which is, according to Daniel, “instead of the pop being $4 it’s $3.75.” They do a lot of catering events and don’t have a specific place to set up at on a regular basis, but they are hoping to gain traction which will allow them to set up a formal schedule for their locations.

“We’re going to be looking for places to set up at on a regular basis since things are settling down with the schools and such,” Daniel said.

To keep up with where Frios, follow them on Instagram or Facebook where they will give updates on their location status. Frios hours are from 9 a.m. to 11 p.m. Monday through Sunday.

Apricot Lane Boutique had their grand opening in July. It is owned by a mother-and-daughter duo who are not only selling clothing, but they are supporting the community through philanthropy, as well.

The owner, Staci Martin, said “Apricot Lane as a whole is more than a boutique, it’s a boutique with a cause because the entire franchise itself supports Noble Venture, which is for women and girls that have been rescued from human trafficking. We sell bracelets in our store that are made by these women to help them have a sustainable income and get back into their society without looking like trash because that’s what they’re deemed after that.”

The Apricot Lane franchise encourages each location to choose their own charity to support.

“My store personally supports the local charity For the Silent, which does the same thing for the girls that have been rescued in East Texas,” Martin said. “We just want women to come in and feel beautiful and accepted and come into a place where they enjoy to shop and always feel welcome.”

Apricot Lane will be hosting an event Sept. 24, which gives 20% of their proceeds to For the Silent.

They carry clothing catered to young people going out as well as modest work apparel. Their size ranges are from x-small to x-large.

A new and fashionable boutique opened in Tyler in September. The Rose XoXo Boutique is a great place to find trendy women’s fashion.

Alonda Garcia, niece of the owner Marbella Martinez, said, “we have a little bit of everything. We have casual dresses, maybe for brunch. We have tops, jeans and we have plus size. Mostly the age range of 18 to 55.”

The store is a passion project for the owner Martinez, who has struggled with mental health issues in the past.

“This is like a place for her to open up,” Garcia said. “When she was in high school, she used to sell purses and jewelry and stuff like that.”

According to Garcia, Martinez’s high school side hustle gave her happiness in the middle of the pressure of high school until she felt it was time to focus on her family life after getting married. Now, Martinez’s husband and her feel it’s time for her to go back to doing something she loves.