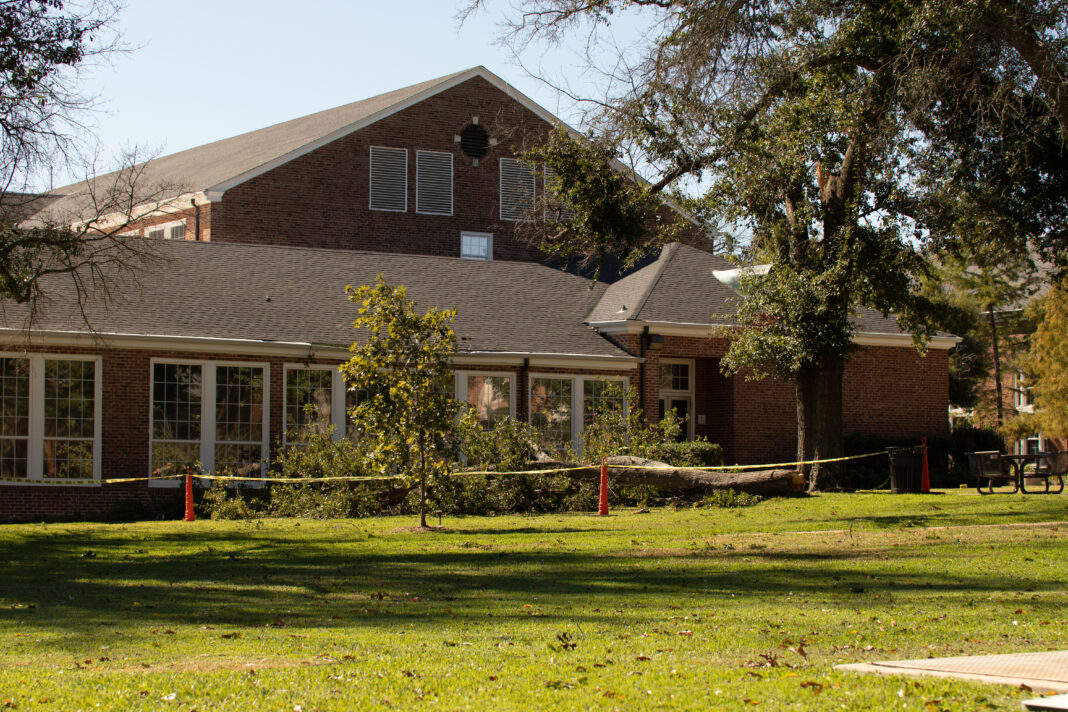 Due to high winds, tree limbs have fallen across campus. One tree limb has caused roof damage to Jenkins Hall.

The sidewalks are closed between Potter Hall and Jenkins Hall and the main plaza. People are being redirected to walk through surrounding buildings.

“This morning I was walking to my Psychology class, running a few minutes late and then I heard a noise that sounded like it was breaking,” said Sarai Trejo, an Ultrasound and Sonography Freshman at TJC. “And then this guy was behind me and he yelled at me to move, and when I looked up I saw the tree start to fall, so I ran.”

At 1:42 p.m. a TJC alert was sent out to students addressing the situation.

The email states the following:

“The current high winds have caused some large tree limbs to fall at the Main Campus, especially around Potter Hall, Genecov Science Building, Jenkins Hall and Vaughn Library. Due to the hazard this is causing, those areas have been cordoned off, and several entrances to those buildings are being rerouted. Please do not cross these tape barriers; watch for signs on doors; and follow other instructions from campus officials that may be in the area.

Please avoid or use caution in these areas.

As you know, the February winter storm killed some of our large trees, and the work to remove dead limbs is ongoing. Please be aware of the potential for falling tree limbs throughout campus.

Thank you for your cooperation.
Mark Gartman”

“It has to do with the storms that moved through the region yesterday. The storms were a cold front that mixed with a low pressure system. Those fronts and systems are flowing east and west, with strong winds coming from the north,” Pendleton said “You can think of it like a really strong river flowing south from the great plains, and the low pressure system is pulling that wind in, resulting in the higher than normal wind speed.”

This is a developing story. More information will be added as the situation progresses.