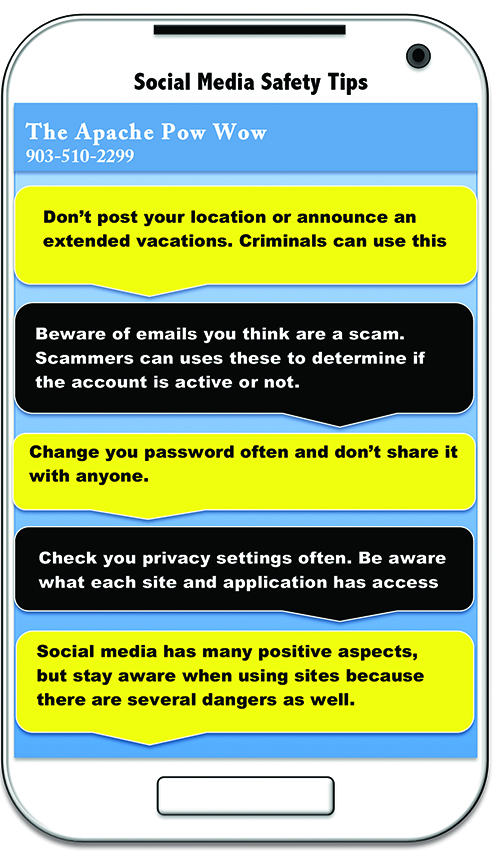 A quick walk around the TJC campus reveals dozens of students whose faces seem glued to the screens of their phones, their fingers flying across the keyboards.

87 percent of students say that never leave home without their cell phones and according to a joint-study by Study Breaks and Campus2careers. They say 68 percent use their phone to “check-in” on social media.

“I wake up in the morning and check Snapchat, Instagram and Twitter,” said business major McKenzi Parrish. “I find that when I am bored, I automatically check social media. Things like Facebook are well-protected.”

Parrish believes that most social sites have privacy setting, such as “friend request,” that allows users to monitor their page. Any unwanted attention or dangers are essentially the user’s fault, because they allow people access to their page.

“I think Tinder is more dangerous, because girls just go and meet these guys,” Parrish said.

Dating apps such as Tinder allow single people to chat through social media, and meet up if both parties are interested. These sights have a dark side, however. For instance, a man in California was sentenced to prison after raping two women he met on christianmingle.com.

“If you are planning on going somewhere at night, don’t put the exact place and time,” Parrish said. “That just makes it easy for people to scout you out.”

“Myspace and Facebook users can post that they will be out for the evening, which gives potential thieves a large time window to burgle the property,” according to a statement published by the National White Collar Crime Center (NWCC). “Facebook and Twitter now have a new ‘my location’ feature, allowing readers to see where they were and how long ago it was when they posted their update, making it that much easier for criminals to attack.”

Users should be aware of what kind information they post on social media and what features the sites has, such as protecting their information when uploading pictures. Sites like Facebook also have popular “check-in” features that users allow users to share their activities and locations.

“This feature tacks on information about where the user was and when they were there when they updated their status,” according to the NW3C. “For example, at the end of a status, it will say ‘near Cheat Lake approximately 2 minutes ago.’”

These features can be a fun way to meet up with friends, or can have more sinister uses. NBC reported that Lisa Gibbons was sexually assaulted while trying to raise cancer awareness around Lake Michigan and blogging about her cause and location as she went. The police believe that the attacker traveled a significant distance, and followed Gibbons story on Facebook.

Social media also put users at risk of having their identity stolen through methods such as phishing, malware and social engineering.

Phishing is an email scam where perpetrators send out emails disguised as account security or retail sale reminders and when the users try discontinue the email it lets the phishers know the email is still active.

Social Engineering is another scam, but exploits the human physcology rather than hacking someones account in traditional methods.

“A classic example of this starts with a friend on your network sending you a message asking for a quick loan to get car repairs so he/she can get home for work on Monday, and ends with you finding out a few days later that your friend never needed car repairs and that the person you transferred money to was a scam artist,” according to the NW3C.

Social media has many positive uses, but user need to be aware of how much information they are sharing.