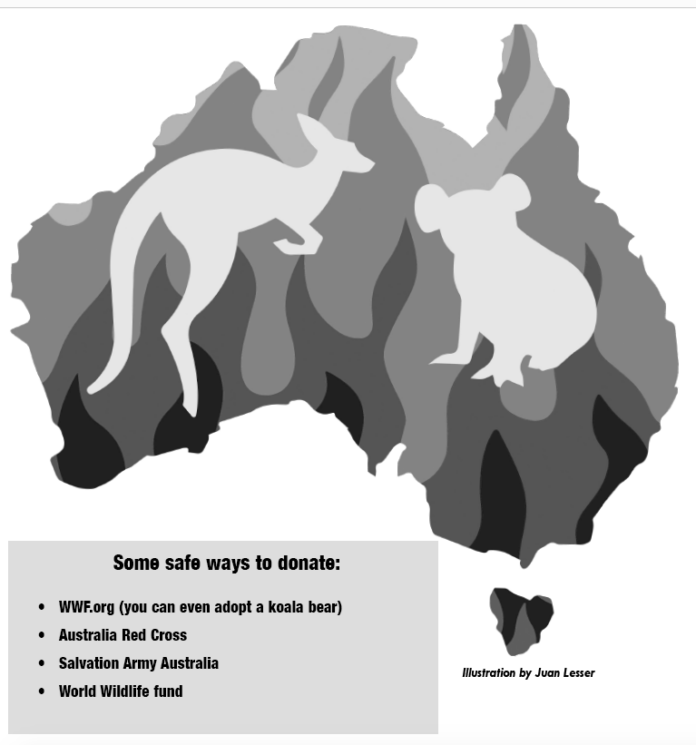 Here we are again – hearing about another big wildfire – when just last January we were reading about the fires in the Amazon. According to greenpeace.org as of Jan. 22, Australia is still burning and at least 29 people and an estimated 1 billion animals have died, and 17.1 million acres of land, which is two-thirds of the size of the United Kingdom, is destroyed.

Get your tissues out for this part because it’s hard to hear. Kangaroo Island, a wildlife sanctuary known for its biodiversity, has lost 50,000 of its koalas due to the fires. It amazes me that despite the fact they’re dropping water on the fire, it keeps burning.

Last June, Australia started burning and the fires are still ongoing. According to Business Insider, “Australia has become an inferno. More than half of the country is choking on smoke, and the skies glow orange as bushfires continue to ravage the continent.”

There have been fires in every Australia state, but New South Wales was hit the hardest, which includes Sydney and Melbourne, according to CNN.

Because it is summer there, the rising heat is making conditions worse and difficult to get the fires under control. The Australian weather bureau has confirmed that Australia dealt with the driest, warmest temperatures on record, which has greatly contributed to the wildfires this summer.

Also in Australia the bushfire season begins in the spring, which made hot and dry circumstances worse. The rainfall was 40% lower across the country last year, according to greenpeace.org.

I believe the environment can change when drought causes increasingly devastating events like wildfires and loss of animal and plant life. Apparently the fires started months before they usually start, and continued to be violent during the unprecedented drought and undefinable heat.

I know if I lived there with the windy conditions and heavy smoke, it would be difficult to breathe, much less go to work and school. I applaud those who are bracing the flames to fight the fires.

Even though it’s far away, we can still help them out anyway we are able. We all need to do whatever we can for the welfare of this land: pray for more rain, lower temperatures and less wind. You see more celebrities taking action, which is good because others will follow their lead. If you can, donate. It doesn’t matter how much you donate because at least it’s something, and you are helping Australia.