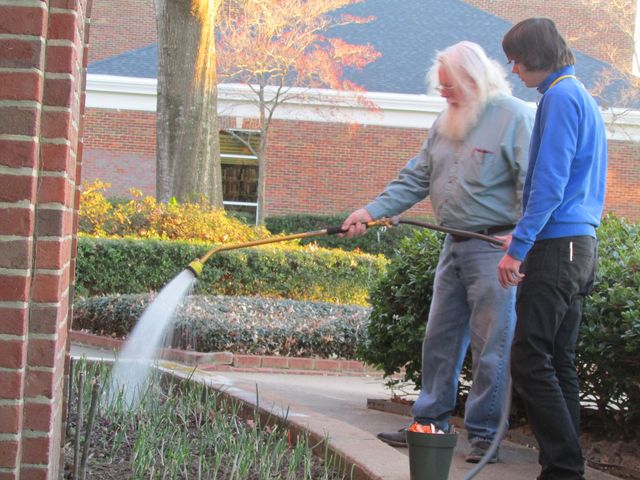 Placed in the center of campus lies the circular Vaughn Conservatory. Two sides of its perimeter are lined with plots of brown fertile earth, and layered by green and purple plants. Covering them like a warm blanket are leaves that have fallen from the shedding trees. The tallest of these plants is about one foot, the smallest five inches. The soil is dry, same as the dead leaves, but the plants remain green. The air is cool and crisp, an occasional breeze sways the plants but their roots hold their structure. On the opposite side, pale sandy dirt abides. A few two-centimeter holes appear in the dirt, and white speaks of fertilizer are scattered about. A small portion of this plot is filled with the same fertile soil, and pencil like leaves stick out of the ground. The rest of the plant hides underground from the cold. These two plots, one thriving and one with the future promise to thrive, represent an idea that was started and hopes to continue into something greater.

“We just want to demonstrate that the stuff we’re doing, there’s an interest from students, and we’re actually taking care of the garden,” said Carmen Suarez, one of the students who started the idea of a campus community garden.

In the Fall 2015 semester, Suarez began thinking about the benefits a community garden could have on a junior college. After discussing his thoughts with people in the Honors Program, he found Professor Ryan Button was already considering the same idea. They were able to get permission for a test plot around the perimeter of Vaughn Conservatory, and by the end of the semester were able to plant lettuce and onions.

Now smells of strong, pungent, organic dirt enter their noses and surround their hands when they meet to work on the garden. Volunteers are learning the basics of growing a garden, from planting, fertilizing, watering, up keep, and more.

“Where I graduated from, you’d only join like the green club or the garden club if that’s what everyone was joining, and usually, they’d do it just for a resume filler. Here instead of actually having people just as resume fillers, you have people who are involved and want to get their hands dirty “said Aiden Klouda, one of the first responding students to help with the garden.

David Griffin, whose wife Nancy Griffin teaches economics at TJC, comes out to help the group. He started gardening when he was 4 years old, he and his wife raised longhorns and cattle until he realized he was missing something, dirt under his fingernails. He returned to gardening and wanted to help share his knowledge with the garden volunteers on campus. He sees it as a lost skill that is necessary for future generations to learn.

The garden has brought together different people and different departments for the same interest. Deb Kelley, professor and Department Chair for Behavioral Sciences, Cliff Boucher, Biology professor and Department Chair of Life Sciences and Agriculture, and Betsy Ott, Biology professor, have all participated in offering advice, organization, and implementing steps of growth for the garden.

The main hope for the garden is to grow enough food to donate on a regular basis. Professor Kelley is working toward a partnership with PATH (People Attempting To Help). PATH holds many support services for the East Texas community, one of which is a food pantry.

“Promise number three on campus ‘campus service’, I don’t think we can beat that drum enough,” said Kelley, “I think it’s important students think on different levels of socioeconomics . . . it’s not just talking about it but doing it.”

Actions speak louder than words, and so far plenty of action has taken place to prepare the plots for planting. Suarez says that many four-year universities have large competitive garden projects such as the University of North Texas, but not a lot is seen on the junior campuses.

“What this garden would bring in, it would put TJC at the forefront of sustainability for junior colleges,” said Suarez.

This would be giving TJC an opportunity to unify and grow volunteers on campus, leading them to look at volunteer opportunities outside in the community. As for now, the spot has remained almost a secret.

“Something people don’t know about the garden is that we actually have a garden,” said Klouda.

If the test plots around the conservatory are a success, other larger plots are in plans for the future, such as the side of Genecov Science Building and Potter Hall.

Even though the garden has a small beginning, all those involved are hoping it will turn out to be a success that others will enjoy and appreciate. In the words of the students, it’s “Fulfilling” and “Fresh”. Definitely a chance for growth on the TJC campus.