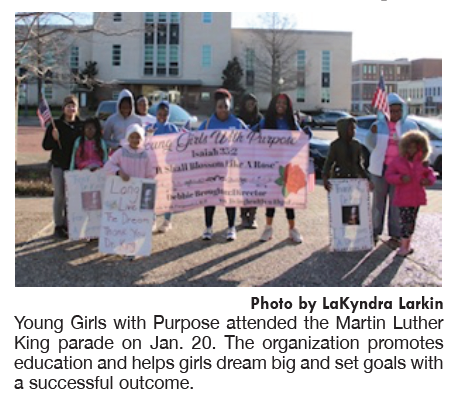 Hundreds gathered around the T. B. Butler Plaza in
downtown Tyler to connect with others and share why
Martin Luther King Day was important to them. With
temperatures in the upper 30s, participants were bundled
up in heavy coats, gloves and hats.
Many came together early Monday morning to highlight
the legacy of Dr. Martin Luther King Jr. at the 34th
Annual Interfaith Community Program sponsored by
Tyler Together Race Relations Forum.
Many organizations came out, including Young Girls
with Purpose in Tyler founded by Debbie Broughton. The
organization has been around for nine years and Broughton
took the young girls ages 12-18 to the square to show what
it is like to get involved in the community.
“One of our objectives is to involve the girls in the
community and show what it is like to give back,”
Broughton said. “We are also here to celebrate the legacy
of Dr. King.”
Like Young Girls with Purpose, other organizations were
delighting themselves in King’s legacy such as East Texas
Parents, Families, and Friends of Lesbians and Gays. The
nonprofit organization “educates, advocates, and supports
the LGBTQ community,” said Brenda McWilliams, a
representative for the organization.
“(This day means) inclusion and equality and
diversity. We want to promote all these things in the
community,” McWilliams said.
She also said King’s vision was more than black and
white. It meant inclusion for everyone and equality for all,
no matter their race or sexuality.

Shortly after gathering around the plaza, Ambra Philips, an active supporter of TTRRF, shared the theme of the event:“Only in the darkness can you see the stars,” which is a quote from King.
Every year, the organizations march down Broadway Avenue to the Cathedral of the Immaculate Conception where a program is held. The John Tyler High School Band led the march, followed by the people representing their organizations. This was also the first year the Robert E. Lee High School Band joined the annual march.
Following the march was a program held in the Cathedral at 423 S. Broadway Ave. Bishop Nick McGrew called the program to order and explained that people are the light of the world and that they are also still a work in progress regarding King’s vision.
City of Tyler Mayor Martin Heines has served for 10 years in Tyler and said he was proud of the community.
“There are so many good friends here and Tyler, Texas, is a better place because of your involvement,” Heines said.
Keynote speaker Sha’Rell Webb, an educational specialist and science teacher, shared her story on how she got to where she is today despite her adversity.
“I’ve had some dark and dry times,” she said through tears. “(but) I’m grateful because they made me into the woman I am today.”
At age 2, she was adopted by her aunt and uncle because her mother was, and still is, addicted to cocaine and does not know her biological father. Although she experienced that at such a young age, she shared that the family home she grew up in was full of laughter and joy despite her circumstances.
By the time Webb left home to attend Jarvis Christian College, her aunt and uncle had already passed away. She felt alone in college because she had no one to check in on her and was four hours from home. She attempted suicide twice but after the failed attempts, she realized she’s here for a reason and pursued a career in education.
Eventually she became a science educator and founded “Coding with a Twist.” Her organization is available to her students she said were underestimated. “Coding with a Twist” gives the students hands on learning to science. With the organization, she is able to loan other organizations the technology they may not have access to or cannot afford for their own events.
“I’m on fire to inspire,” Webb said, sharing her personal motto. “What you do now will determine your future.” She ended her speech by saying to keep moving forward and reminded the crowd of the theme of the program.
By the laughs and fellowship following the program, many felt inspired on this day.
“I’m so glad a family of a friend invited me here today,” Aleah Gilliam, 20, from University of Texas at Tyler, said. “I didn’t even know Tyler does this, but I just feel so inspired and filled with a sense of hope for America. It’s amazing the mark Dr. King left in his life we still celebrate today.”