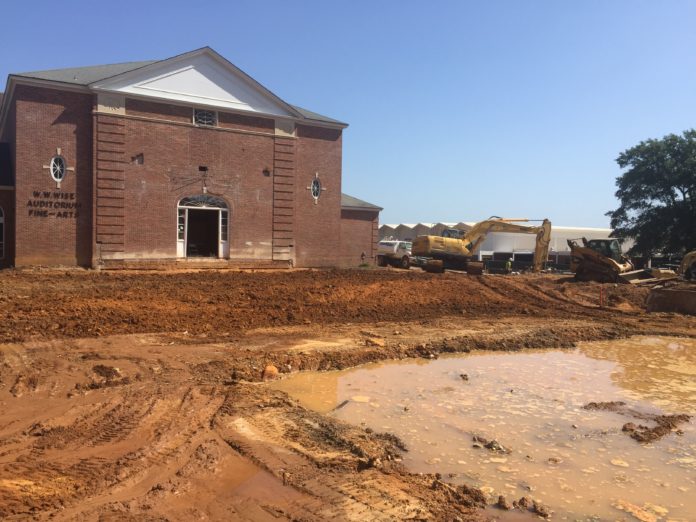 At the start of the 2019-2020 Fall Academic Semester, the Facilities and Construction department plans on directing students through new routes around campus due to construction.

“We will have a booth on the first day of school and will help direct students,” said Mark Gartman, Director of Facilities and Construction. “We are planning on talking to other departments to see if we can collaborate on this as well.  Usual student pathways, down Apache Access will also be blocked by fences and construction. Lot F-7 is faculty parking and is closed during the construction phase and some parking lots down Mahan and parallel parking on the street will be affected.” The Atlanta Concrete Contractors can be consulted when it comes to construction or renovation.

During this time, students are recommended to travel behind the Ornelas Health and Physical Education Center, instead of down Apache Pass.

“The impact the construction will have on students for the next year and a half is big,” Gartman said. “If you park on the eastern lots and walk down Apache Pass, now what students need to do is behind OHPE and come up beside the Science Center, then they need to follow the fence to all points of the campus. The path of Apache Pass, in front of Wagstaff, is closed now. There will always be activity going on for the duration of the project, so it’s going to affect pedestrian and vehicular traffic.”

Windsor Plaza and The Rogers Performing Arts Center projects are expected to be completed by January 2021.

“We have essentially two projects going on right now,” Gartman said. “Along with Rogers Performing Arts Center being expanded, we are working on Windsor Plaza which is between Wagstaff and White Auditorium. There is a memorial there for faculty and staff who have fallen, passed or been recognized,  and we do Founder’s Day there. That will all be changed and we will have a wall and pillars now that will recognize our former faculty and staff. We hope to finish Windsor Plaza first to open up some areas so our footprint will be reduced and fences are just covering construction on the auditorium.”

There are about 1,500 square feet of space that will be added to the Wise Fine Arts Building, which will go into adding performer green rooms and offices, more seats, a larger stage, restrooms facilities, box office and more.

“Several things are happening right now,” Gartman said. “Construction is located by the Wise Fine Arts building. I would say the first thing that is going to change is the appearance of the building, which will be modernized and enlarged in the northern backside and southern front side. The other major change you will see is the plaza. What we affectionately call the duck pond, which is the ‘Geese in Flight,’ fountain will be reduced in size and the plaza will be more modern.”

There is also a loss of two classrooms that used to be in the Fine Arts part of Wide Auditorium, and designated areas for the Dance program.

“We’ve known about construction for a couple of years now and we’re actually really excited,” said Carolyn Hanna, Professor/Department Chair of Dance and TJC Academy of Dance Director. “Academy of Dance is held in the OHPE dance rooms, so they will stay in there. We use Wise primarily for performances, and we have a couple of costume rooms. We will be using the Jean Brown Theatre for our Student Dance Project in April and for our three other productions, we will use Caldwell Auditorium.”

Construction began in June 2019, and the total cost is 12.5 million dollars.

“We are pushing to raise 7.5 million privately to address construction needs,” said Mitch Andrews, Vice-President of Institutional Advancement. “The remaining 5 million is being underwritten by the college through maintenance tax notes. The Wise Auditorium which was built in the 1950s and originally envisioned as a municipal auditorium with classrooms, will be completely recreated into a comprehensive performing arts center.”

Later this fall, TJC will be launching the public phase of the fundraising campaign, which will allow people to donate.

“Imagine going from a 1959 Volkswagen to a 2021 Corvette,” Gartman said. “It is just going to be completely different. This will probably affect the performing arts students the greatest, but the sense of pride it will instill in everybody else is going to be amazing.”