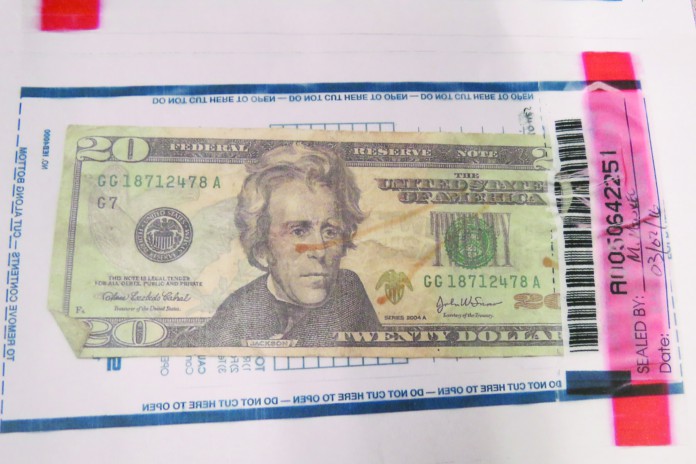 The use of counterfeit money for decades, practically since the advent of banks.

This problem has presented itself here in Tyler when a Chick-Fil-A on 1250 Magnolia St. reported the use of counterfeit money.

Cynthia Crouch, working at the Chick-Fil-A, reported at 12:35 p.m. on March 3 that two counterfeit twenty-dollar bills passed through the establishment. While she turned one bill over to Sargent Hukill who has tagged and placed the money in evidence, Crouch has yet to locate the other bill.

Another employee, Krystal Lacy, also reported the use of a counterfeit twenty-dollar bill on the same day at 4:10 P.M. The only suspect is Jeremy/Jason Unk, who also goes by the alias “Taco”.

The difference between real and most fake bills is rather easy to differentiate. Real money is made out what’s known as rag paper — a combination of linen and cotton fibers. Counterfeit, or fake money, is usually made when a person scans whatever bill they desire onto their computer and then reprints it.

The bill that is most counterfeited in the United States is the twenty-dollar bill.

“However,” says Marshall Brain, founder of HowStuffWorks, “your stint as a counterfeiter wouldn’t be very successful. The twenty-dollar bill that’s been in circulation in the United States since late 2003 is one of the high-tech, counterfeit-proof bills from the U.S. Treasury. If you zoom in on different areas of the bill and look at them closely, you can see a number of features designed to deter ‘casual counterfeiting.”

Certain steps can be taken when a bill is suspected to be counterfeit.

-Do not return it to the passer.

-Delay the passer if possible.

-Observe passer’s description, as well as any companions, and the license number of the vehicle if possible.

-The person accepting the bill should initial and date the suspected bill.

-Do not handle the bill, place it in an envelope.

-Hand over the bill ONLY to an identified police officer or U.S. Secret Service agent.

The investigation at Tyler’s Chick-Fil-A is ongoing.