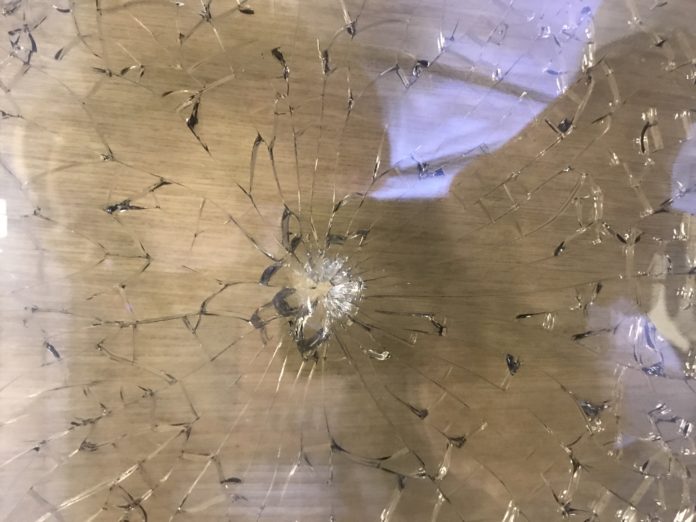 Members of the International Game Developers Association witnessed a person shatter a window pane in the Apache Spirit Room at the Rogers Student Center at approximately 6:31 p.m. Monday, Oct. 21. At the time, no one knew whether the impact was caused by a rock, BB gun or potentially something more dangerous.

Campus police arrived at the scene two minutes after calls were made, and Daniel May, IGDA member, said police were unable to find the object that caused damage to the window pane. Campus police are investigating the event and has not commented on the incident at this time.

“All of a sudden I just hear something impact, and I hear glass shattering,” said Kaitlyn Vest, vice president of IGDA. “I turned around and it looked sort of orangey-red; I thought a bird hit it. I didn’t see anything stuck in there, and even though they (campus police) searched for something they didn’t find anything.”

Additionally, the Frank L. Baldwin Facility and Construction Building had a campus vehicle damaged in a similar fashion. The facility and construction building is near the Rogers Student Center, behind the Wesley House.

A third incident, occurring a few days prior, involved the damaging of a wired half pane window on the front of the facility and construction building. This event was confirmed by Ray Morgan, supervisor of building maintenance for facilities and construction.

According to TJC incident report 20190599, the offense was considered criminal mischief, with references indicating that an unknown suspect broke a window in the Spirit Room.

This is the third incident of its kind.