TheDrumBeat.com
HomeNewsA day in the life of a cheerleader
News

A day in the life of a cheerleader 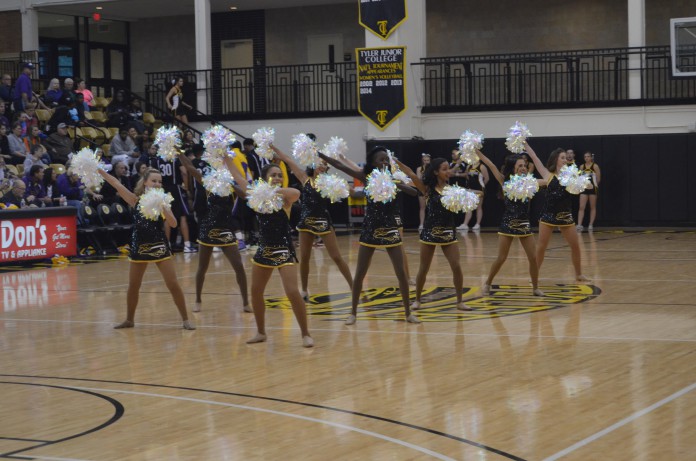 A day for a cheerleader is not all fun and games in fact they are in constant motion from the moment their day begins to when it ends. They don’t just do a couple of flips here and there then go to class, nor do they not even set foot in the weight room.

Life of a cheerleader can be just as serious as it can be for the athletes of the school. All the work that is done for the team is done behind the senses and everyone only sees the end result of the hard work and hours and hours of repetition of working on their craft.

“Wake up around 5:00- 5:15am get ready for practice, said Megan McClendon freshman cheerleader at Tyler Junior College “go to the trainer to get my wrist wrapped and be at the gym no later than 6:30 in which their practice will go until 9:20. That is a three-hour practice to start your day, can you say rude awakening?

The reason that the cheerleaders wake up so early is because their first practice of the day is at 6:45am. That is early for most students given the fact that majority of classes on campus do not start until 8 or 9 am. So not only do they have an early morning practice to start their day they are waking up around 5am just so they can get ready so they are not late, which is not something that anybody wants to be.

Morning workouts are exactly that, done in the morning so the rest of the day is free right? Wrong that is just the first of three workouts a cheerleader goes through. After the 6:30 practice they is somewhat of a break in which the team can go to the café or attend any classes they have in the mornings, then at noon until 1:30pm the team goes into the weight room for their second workout of the day already and it is only 2:00pm now, most students are maybe just now going to their first class or going to chick-fli-a or somewhere to get something for lunch after having one or two classes.

Most students would be content with two workouts a day; most students only go in the gym one time a day. The cheerleaders have had their second workout of the day and there is still 10 hours left in the day. So what’s left for them to do? Well of course get another workout in, on that is optional but highly recommended meaning that most if not all attend.

All of this tanning helps in preparation for game days, which can be “ hectic,” said McClendon. It the average cheerleader two hours to get hair done, wash uniform, and put on make up.

On a game day the cheerleaders, “Have to be at the game three to four hours, said McClendon “before the game starts.”

Cheering in college is a totally different world then in high school because the atmosphere is different for the two for high school you “Have a set period, said McClendon “you had it first and eighth, that was your cheer periods.” But in college you soon find out that is no longer the case. “In college you have selected hours,” said McClendon “so if the coaches pick 9am to 12 at night you have to go.”

If you want to become a college cheerleader it can take over your life due to all the dedication it requires, “literally cheer is my life now.” said McClendon, there is no room for people that don’t want to fully commit to be on the team because you, “ if you want it you work for it.” Said McClendon