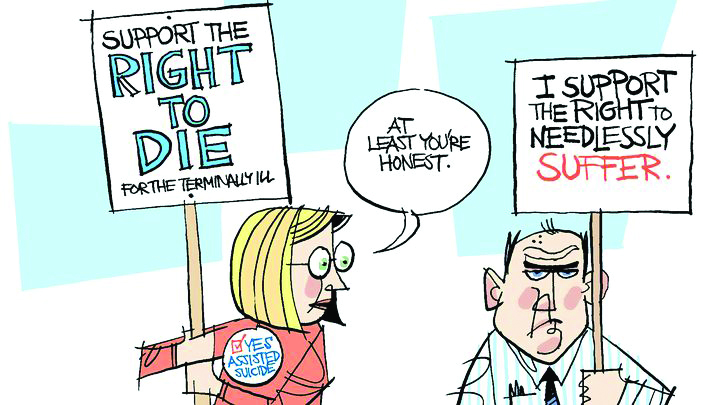 Have you ever watched someone you love die, over a period of months or years? Have you seen the suffering in their eyes as the treatment to keep them alive turns what little life they have left into a living hell?

When we execute criminals, they go quickly. It would be unconscionable to even propose that we kill them slowly via chemo or radiation. We wouldn’t let a serial killer suffer in that way, but we insist our grandma does in order to selfishly hold onto her for just a few more months.

And it is selfishness that causes us to think we have the right to dictate how or if the people we love finish out their lives. We don’t want to see them go, so we claim religion or morality and force them to slowly starve because they can’t even keep their pain medication down.

God wants them to suffer as cancer slowly eats away at them and nothing a doctor does can help ease their pain, right?

This debate has recently come back into the spotlight as Brittany Maynard bravely documented her journey. Some might say she took the cowardly way out, but I doubt they’ve ever been in a position to have to make that same decision.

Maynard moved to Oregon, a state that passed their Death with Dignity law in 1994. Her husband and family stayed by her side through every step of the journey as she slowly faded away due to the malignant brain tumor that was destroying her. Two surgeries failed to stop the spread of the cancer.

In the end she made the decision to end her life because she couldn’t bear to see her family watch her suffer as she died. She held on for three months past the survival estimate her doctors had given her and tearfully related that she didn’t want to die, but she knew it was coming.

You can read more of her story at http://cnn.it/1rURPCH

Give the people you love the dignity to decide how their life ends, if they’re terminally ill. Not wanting to linger in a state of perpetual torment does not mean they don’t love you just as much. It means they have come to terms with their illness and you need to as well.

You don’t have the right to tell them they should slowly, agonizingly deteriorate just so you can greedily cling to them.